Posted by The Food Ho on June 30, 2008
So, last weekend we went to Costa Brava for tapas for lunch.

This place is on Garnet in PB across from Vons. If you haven't been there, you should go whenever you have a special occasion or something. The atmosphere is really cool - it makes you feel like you are in Spain.

So we went on Saturday for lunch, and we were literally the first ones in. They must have opened a few minutes before. We sat on the front patio, which is now covered with a red awning. When we first sat down it was stifling, but then the air started to circulate and it was fine. The dining room looked amazing. There are skylights in there, so it was all lit up so that it looked like it was outside. Then there is the back patio which is for big groups - I hope to sit out there one day. The other aspect that makes you feel like you are in Spain is the waiters. They all seem to be literally imported from Spain. The FP was joking about how I like to go to Costa Brava because I like the waiters. They are all pretty good looking, but not really my taste - spanish pretty boys. I like them kinda dirty - you know, like the FP.

We got a carafe of sangria, which was so good that we got another after the first. They put the soccer game on, which made the FP pretty damn happy.

So the first two things we got were the pulpo a la gallega and the boquerones. Here is the pulpo: 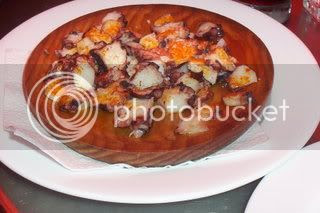 So this dish was is thin-sliced octopus with smoked paprika, extra virgin olive oil and sea salt. The octopus was nice and tender, and the sea salt really added that extra something that made it just a really beautiful dish.

Here is the boquerones: 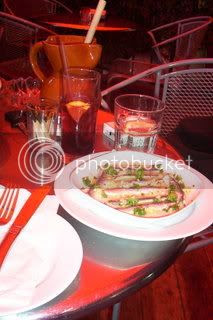 These are some of the best anchovies there are. They do not resemble those tinned anchovies packed in salt. People who say they hate anchovies taste these boquerones babies and fall in love with them. They are preserved in vinegar, olive oil and salt. These are served cold, and this particular dish was garnished with fresh garlic, parsley and extra virgin olive oil. I would like some boquerones right now!

After that, we got an order of morcilla frita con cebolla. This is blood sausage fried with onions. It sounds scary. It tastes so rich and good. It's made with pig's blood. Sound gross? It's not. Cooked blood is very different from raw blood, just like flesh. Generally when we get blood sausage, it's kind of on the dry side, because there's all that blood in it that has to be cooked. Not so with this order of morcilla. It was firm, yet moist - just like I like my....never mind. Anyway, I can't describe to you how tasty it was. If I fed it to you and didn't tell you what it was, you would probably cream your pants with delight. I swear.

After that we had something very unscary - patatas a la brava. 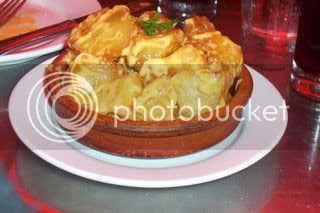 They are fried potatoes that are tossed in spicy alioli. So yeah, it's like a warm potato salad, but better. It's funny because I used to deal with alioli, or aioli so much that I got sick of it. Now that I never deal with it or eat it, it is delicious when I do have it. It's like mayonnaise - except it's made fresh with (scary) raw egg. It's a sad day when people are frightened of raw eggs...

So at this point, we were on our second pitcher of sangria, and there was one more thing not on the menu that we wanted. The FP had looked up Costa Brava on the net, and he read that they had Jamon Iberico. This is the prized ham that is similar to serrano, but it is made with fancier pigs. These are black footed "bellotas". Part of the reason the foot is left on the ham is so you can see for yourself what color the foot it, and it looks creepy and cool too.

So the waiter asked if we wanted anything else, so I asked, do you have Iberian ham? And the waiter replied in his modelish spanish waiterly way, Jamon Iberico? Yes we have it. I think he wasn't expecting this question. So he put our order in. We didn't ask for the price. I think we would have gotten it, no matter how much it cost, but it was better not to know before we ate it.

So after a while, we got this huge plate of the stuff, thin, thin, thin sliced. 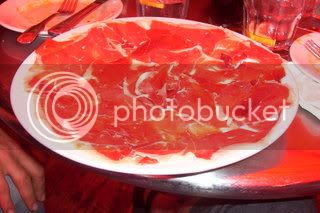 I'm afraid the picture just doesn't do it justice. When we first got the plate, it was fairly dry. The flavor was good, but not nearly as rich as the ham we had had at Rio Mar in New Orleans. I think it hadn't sat out long enough, and the oils had to start exuding from the thin slices. I know this sounds gross, but you have to see and taste it to understand. It's all flavor. As it began to "heat up" it started to get that sheen. Sometimes I could hold up a piece and see through it like stained glass. It definitely got more flavorful. I swear, I could taste the acorns that the pig had eaten. It is such an earthy flavor, but in a mellow subtle way. It's just an experience that I would like to share with all of you, but until I win the lottery or something, that will not be. Because it was pretty damn expensive....but it was worth it. So yummy. Such a lovely texture. I can't explain it to you, but it was sublime.

So as we received the bill, we had already finished our sangria. The waiter was nice enough to pour us another glass free of charge. Good way to soften the blow of the check. But we were thoroughly satisfied, that he didn't have to do that. But I think he wanted to....
costa brava eating food tapas