Posted by The Food Ho on June 22, 2008
So, that is a great name. Maybe I'll open a place next door called Pasture Beef, or Farm Vegetable. Anyway, this is a blog entry that should have been written almost 3 weeks ago. But once again, I am falling behind.

So on June 1st, which was our wedding anniversary, my sis's bday and our friend's bday as well, we went to Chinatown in LA for dim sum. We were there because we were going to see the Cure that night. So we parked and walked around. So Ocean Seafood had a huge sign on the side of the building. So, we thought, why not. It was upstairs. The Food Pimp pointed out how it was like the Phoenix in Chicago Chitown. Upstairs with a huge dining room. There were tanks of lobsters, dungeness crab and these big prawns when we first walked in. Then we were ushered to a table amid an already filling up dining room.

Have you ever noticed how some Chinese restaurants, mainly dim sum that I've seen, set the tables up so the chairs are pushed together at the corners, rather than equally spread apart in the middle of each side? If you don't know what I'm talking about, go to Jasmine on Convoy and look at the seating of the 4 tops. It's pretty interesting. Anyway, we sat at the corners of this table, and we were immediately assulted by dim sum cart after dim sum cart. Frankly, I'm used to having to wait so long that it is agonizing. I really didn't like this. There were just not enough people in the dining room yet, so that carts were all bunched together and they happened to be right in our vicinity. So we almost always get something from the first cart. I think it's a pressure tactic. And of course we waited for 5 minutes to get water that never came, so the FP had to walk up to the service bar and ask someone to bring us water, which took another 5 minutes. But this is a common occurence in ethinic restaurants with us. I don't know if anyone else has this problem, but I would like to hear from you if you do. I sometimes feel like maybe we just need too much water for the supply that's available.

So the first thing we got was a soup with a dumpling in it. So I guess it was similar to the soup dumpling, except it was a dumpling in soup, rather than the other way around. Anyway, it had shrimp and pork in it, and it was garnished with imitation crabmeat. 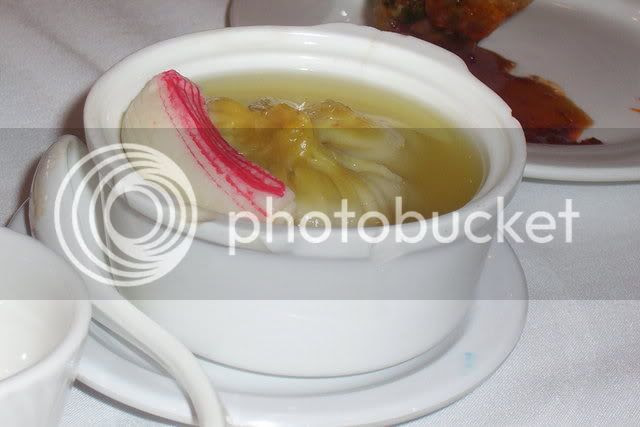 Awww! Imitation crabmeat. Such a strange manmade invention. Who decided, I must serve crab, but all I have is fish, so I'll process it and make it stringy and shape it like crableg? What an evil person...

Anyway, the star of the soup was the broth. The dumpling flavor had infused into the broth, so that it tasted like sweet dumpling dough. I can't explain to you how it tasted better than I describe it. It was a comforting homey taste, though.

So the food kept coming, and before we knew it, there were a bunch of dumplingy things on our table. I nagged the FP to calm down and be patient and don't feel pressured to order something off of every cart. Anyway, we had like a chicken dumpling which was okay. Nothing special. We had this one shrimp dumpling with some cilantro in it. The first bite, nothing special. And then I tasted the shrimp. It was fishy. It was very ammonia tasting. Yuck. So we passed on the rest of those. The braised pork knuckles came. Now those were good. Very tender, nice broth, a little chili, but not hot. 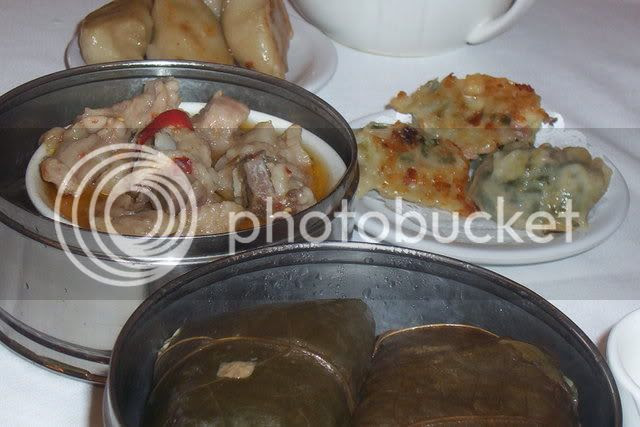 Then we ended up with another shrimp dumpling on our table. But this one was with a spinach dumpling, with shrimp and spinach inside. It was pretty. I'm sure that's why we got it. It was really tasty. The dumpling wrapper definitely tasted different. The spinach added a fresh taste. And the filliing tasted lively, fresh as well. This was really good. Pleasant taste. 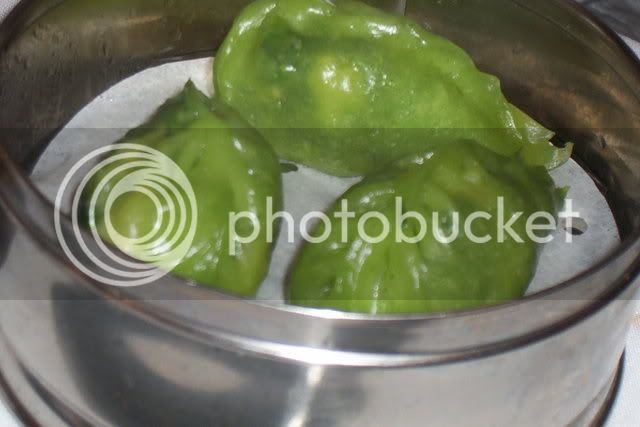 Then came the chicken feet. We didn't get them. They were boiled. They were white, and it looked like there was a sauce on the side. I have never seen them like that, and I was unadventurous because they looked like they had no flavor and the sauce looked too thick and sweet like plum sauce.

Then came the duck and roast pork. We got both. The duck had a good flavor, but it was cold! I don't mean room temperature, because we've had duck at room temperature, which is fine. This was cold. It was maybe 55 degrees cold. Which was a shame because it was cooked nicely enough. The pork was slightly warmer. The skin was still crispy, but at the end it kind of was chewy and got stuck in my teeth. The pork meat itself was not very exciting at all. So so so unfortunate. These are usually the more exciting dishes in dim sum. Here's what the pork looked like. I don't know why I didn't take a picture of the duck. 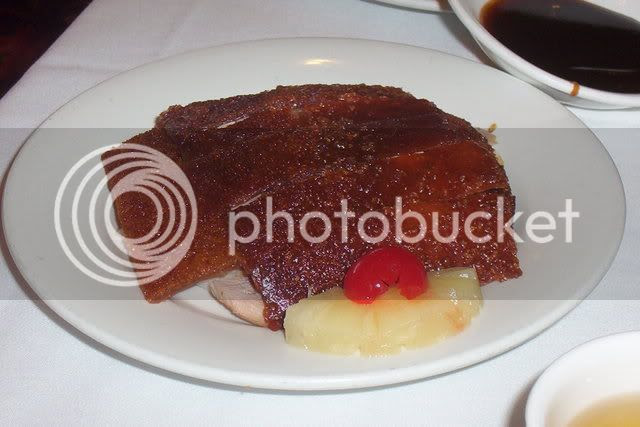 Then the last thing we got was the rice in lotus leaf. This is a must have at any dim sum place. It's got sticky rice and other fillings, all steamed together. Common fillings are chicken and chinese sausage. So at Ocean Seafood, they come in 2 small packets. So one for me, one for the FP. They were hot. The meat in them was tasty. The rice was nicely sticky and cooked. It was great. Very standard, very hearty and satisfying. I think I ate half of mine and the FP ate his and the rest of mine.

So we were pretty full. We were ready to leave. I went to the restroom, and the FP went to pay. The thing is with dim sum, you can get a lot of food for a little money. They use different stamps for different price levels, but it's in Chinese, so it's always a surprise how much it will be. This time it was quite a surprise! It was $48. Granted, I guess several items were in the more expensive tier, but it seemed like a lot compared to other places we have been to. I guess we were in LA at a very obvious, maybe very touristy dim sum place. Which would have been fine, had most of the food been fabulous. But unfortunately, it was just okay, which in dim sum terms is below average. So for my one time review, since we have a 99.9999% chance of never going back there, I give this Ocean Seafood Restaurant In Chinatown, LA,CA, a mere \/\/ four chopsticks. If you find yourself in Chinatown with lots of money, go to another restaurant and spend the rest of the money on lead based toys and coconut buns.

So writing of coconut buns, we wandered around afterward, looking for a bakery with coconut buns. I have to tell you, that when we went to Chicago about 4 years ago, we had the best coconut bun ever! It was a religious experience. We had bought it, and we were walking out of Chinatown to the train, when we took our first bites. We just stopped and stared at eachother with gigantic pupils. It was so light and tasty with yummy rich coconut filling. We've been chasing the coconut bun ever since. There is this one place on El Cajon Blvd. that has good small coconut buns, but they are different. I can't remember the name of the place, but it's across the street from Hing Long Supermarket.

Anway, we went in many Chinese bakeries, and most did not have coconut buns. I think there were one or two places with coconut buns that did not look right. Finally, we saw a bakery on the other side of a parking lot in which we were walking through. As indecisive as we are, we had a discussion about whether we should check it out. I think we were both getting a little tired of walking in circles and were ready to get in the car and leave without our mandatory coconut bun. So we went to the bakery. They had coconut bun. Once again, I don't remember the name or the street we were in. I'm sorry, I failed you as your Food Ho food blogger on this one. I have to start taking more notes right away from now on.

Anway. This coconut bun was big. And it was only like maybe a dollar. It was garnished on top with fresh coconut shavings. I took a bite. It was light, just a little hint of sweetness. The FP took a bite. He got the first taste of coconut custard. It was so sweet and coconuty and rich. His eyes lit up. I took a bite, I got the bun, the custard and the coconut shavings. Perfect. The light roll, the rich, dense, sweet custard, the fresh coconut. We were full, yet we traded bites. We couldn't finish it, though. It was a big rich dessert. Such a tease these

Chinese bakeries can be very deceptive. They have dirty windows, plain names, some have blank storefronts. Then you walk in, some have elaborate decorated cakes, cookies, french pastries. Then there's the Chinese pastries. They look like plain rolls and buns. They hide this secret filling, red bean, mung bean, savory fillings, and of course, coconut. Coconut. A sweet cloud or pillow of sweet bun with a heavy cloud or pillow of sweet, almost too sweet coconut custard. Bliss....
Chinatown coconut bun dim sum Ocean Seafood Restaurant