Posted by The Food Ho on June 29, 2008
So the Food Pimp and I alway whine about not having any Vietnamese food right here in our neighborhood. When we want a quick cheap take out, we have to settle for chinese food.

A couple of months ago, the walk up taco stand across University Avenue changed owners. It looked like it was a yogurt stand, judging from the picture on the window. I wasn't really interested, but it was good to know. So later on, I saw a banner across the side of the building of Vo's Cafe. It said "now serving Vietnamese food". I think I hit the brakes, and if someone was behind me they probably would have hit me. S

So I went home and told the FP the news. I think we went to Vo's a day or two later. So it is about six blocks away from our apartment. With the fuel crisis and prices skyrocketing, we drove there. It was still kind of hot, we just wanted to get food and sequester ourselves in the apartment for the evening. So yeah, we drove there. It turns out, Vo's has a huge parking lot for being a small walk up food stand. And it has a little covered dining patio out back too.

So we walked up and looked at the menu. It was very simple, but I still took a while to order. So we were getting food to stock up. I got the chicken bun (vermicelli noodles) and the stir fry combo with pork, and it came with an eggroll and rice. The FP got the beef pho and the beef stir fry combo. He (Vo) asked us how hot we wanted it. I asked for about a 6, and the FP asked for really spicy. I think the total came to about 22 bucks. Not bad. So we put our order in, and the guy told us it would be a while, so that we should go wait in the back.

So we went and sat in the patio. It was cute. It had like bamboo shutters, and there were Vietnamese decorations on the wall. All they needed was to serve drinks and allow smoking back there and we would be regulars. We were just hanging out. It was nice. A little while later, Vo came out and said it would be a little longer, and he apologized. So it took about 15 minutes or so.

We went home and opened everything up and looked at it. It looked good. Everything was freshly made, which was a nice change, compared to the chinese fast food we usually get out of laziness.

Here was the pork stir fry: 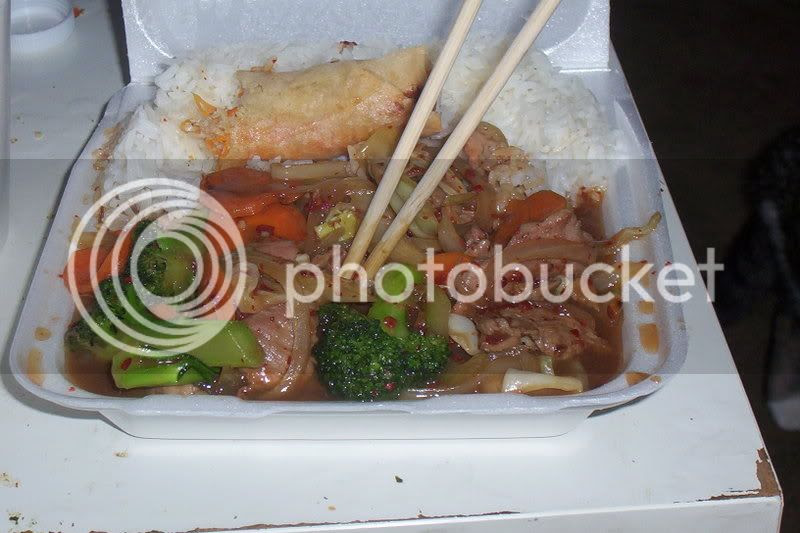 So the eggroll was really good. It was crispy, but not greasy. It had pork and rice noodles in it. The stirfry tasted very fresh. It had carrot, broccoli, chili paste. The pork was really good, meaty, not chewy or gristly. The rice was nice and hot and it was a medium grain rice, which I prefer because that's what I grew up with.

The FP ate his pho. He enjoyed it. 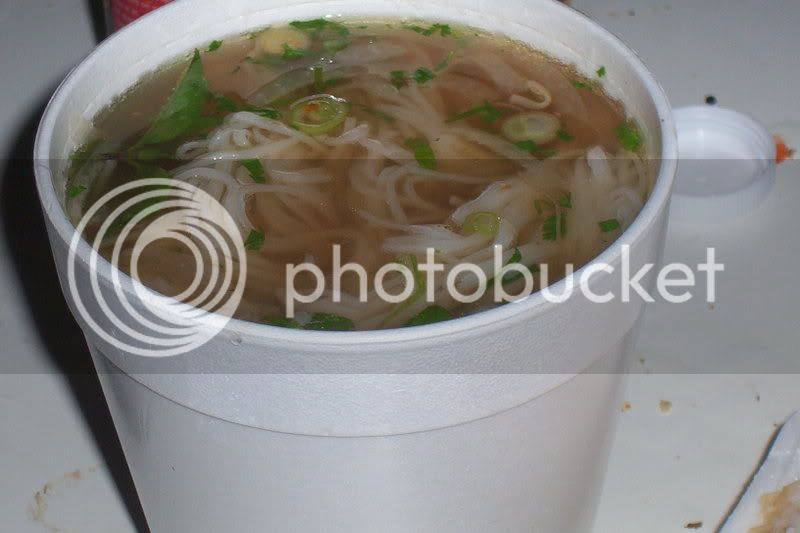 It had all the condiments, the broth was nice, the meat was tender. So we were both happy with our first meals.

Later on, we ate our other meals, me - my vermicelli noodles with chicken, the FP, his beef stir fry. I have to say, I had tasted a piece of chicken when we brought the food home. It was really good, marinated, then cooked to order. It was garnished with a lot of peanuts, which I like, and the shredded cabbage and pickled carrot, which was a nice touch. I didn't bother to reheat the chicken, which would have made it really good. But still, it was a good bun dish. No complaints. Here's a picture, but disregard the dirty stovetop.... 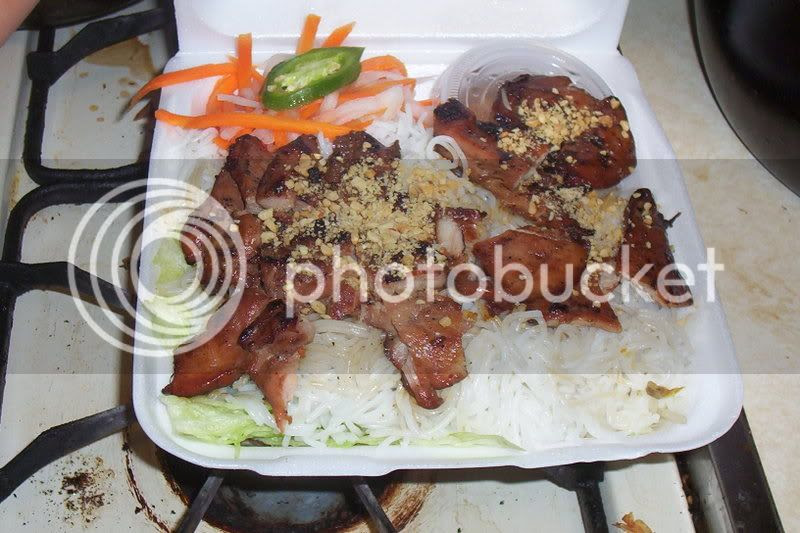 The Food Pimp ate his beef stir fry. He was happy with that. It wasn't very hot, but it did have the chilis in it, which added to the yummy flavor of the dish. We were glad to have this place right in our neighborhood. 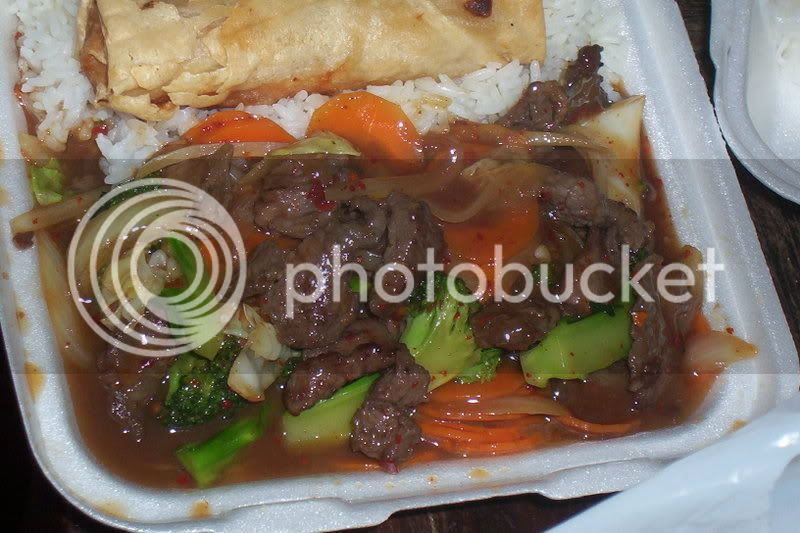 So a couple of weeks later, we went back. Vo remembered us, and he thanked us for coming back. We both got the pork stir fry this time. The FP got it very spicy, and I got it medium spicy, again. We waited in the patio again. This one girl had ordered before us. We watched her sit back there and chow down her food. I guess she was enjoying it.

Once again, we got our food home, and it was good. It was fresh tasting, and it was very light on the thick sauce. Sometimes Vietnamese places are heavy handed on the cornstarch. But Vo's is not. The eggroll was good again. The rice was nice. So it's a pound or two short of being as much food as the great wall, but they cook it fresh and it's not quite as heavy. You all know how Chinese food sits in the stomach. You're really hungry, so you eat it really fast. Then all of a sudden, you're sickeningly full. Then an hour or two later, you have to go to the bathroom right that instant. The heavy chinese food has pushed everything through your system, gotten the gears grinding, and then it's time to empty out the basement to make room for more trash.

So for what it is, I give Vo's Cafe on University Avenue a rating of \/\/\/\ seven chopsticks. The thing is, I rate places against my expectations of the place, not necessarily against other restaurants. With Vo's, one can't expect a spectacular meal, but it's much better than a little fast food joint. If you don't want to wait on your food, the best bet is to call ahead and then pick it up when it's ready. Maybe call the order in, and then walk to there. That way, you help to do your part in prolonging the depletion of fossil fuels from this earth.
eating food vietnamese food Vo's Cafe