Posted by The Food Ho on July 10, 2008
So, this past Saturday, I went to the practice space and I worked on this new song. I don't smoke or anything. So when I get started on a project, I don't really take a break when I'm alone unless I have to pee or poo. So I was there for about 3 and a half hours just working on these 3 guitar parts. (I'm not that great of a guitarist, obviously.) So all of a sudden, I felt faint. I realized that I hadn't really eaten much all day. I figured it was time to pack it up and get something to eat.

So, this was to be my last meal alone. I didn't feel like shopping and cooking, so I went to Phuong Trang. I felt like I should have gone somewhere new and exciting, but I was felt so bad that this was the easiest solution.

I went in, and I knew within 30 seconds what I wanted. This was probably a record. I got the Vermicelli noodle bowl with eggroll and pork.

They brought water. The guy who used to work at Saigon came by and asked, "you alone?" I said yeah. Then I sat there. I looked at the decorations on the walls. The flutes. I looked at the other diners. Mostly deuces (that's 2 tops or 2 people to a table to the layperson). Then this big family came in. They sat at the back table with the lazy susan. They were noisy. They were asian. Yet I guess not Vietnamese, maybe, because they were ordering in english. Pardon me, the dad was ordering in english. He took charge and ordered for the table, pretty loudly, because I could hear him across the room.

I don't think my food took that long, but it seemed like it did. I was very happy to see that bowl of noodley goodness, though.

I somehow remembered to take a picture. So I did. 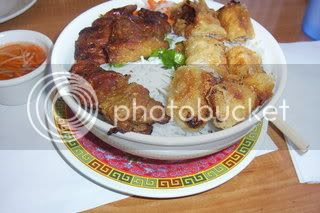 Then I took an eggroll segment and dipped it in the nuoc mam. It was hot (temperature) and sweet and vinegary. Just what I needed.

Then I got serious. I took the lettuce from the bottom of the bowl and the peanuts and carrot and jicama and mixed it all around. Then I dumped half the nuoc mam on it, some fish sauce and some siracha. Then I mixed some more. Then I took a bite of pork. God was it good! Really. I think even if I wasn't dying of starvation I would have been impressed. Because frankly, this marinated meat at vietnamese places can be hit or miss. I mean, I don't know how long they keep it, and it always looks all dry. Sometimes it blows, sometimes it the old don't judge a book by its cover kind of adage. I mean this looked dry. But it really wasn't. It retained the moisture inside. And the flavor was wonderful. Kind of gingery, with whatever spices they used, and the nuoc mam. It was very fortifying. I alternated eating pork and eggroll. Usually I eat the eggroll first so it won't get soggy. But in this case, I liked both so equally that I wanted that half and half experience throughout the whole ritual of eating the whole bowl. Which I did. I think I ate kind of fast.

Once again, just like in the practice space - when there's no one else to pace me, I just steam ahead full speed. Not only that, they must have refilled my water about 5 times. But I always consume a lot of water. I must have a drink at hand at all times. Now, those of you who know me probably think, oh is that a post katrina thing? It most certainly is not. I was like this before that bitch entered my life. Of course, it was like being in hell, not having enough water. I'm like that damned guy in greek mythology who couldn't drink water...you know. I used to know all this shit - back when I had way more brain cells.

Anyway, I ate it all. I went to the bathroom. Number 1 if you're interested. I swear. I wondered if they would think I was skipping out on the bill. They didn't, I don't think. I went up to pay. It was about $7.81. Weird. So cheap. I know, I was by myself and only ordered one thing. It was still weird. I don't think I've gone somewhere to eat by myself in a long time. The last time I can recall was when I went to the old Linkery and got the sausage picnic plate - but even then, I sat at the bar and had a beer or two, so it wasn't like dining there. It's not like I'm scerred to go eat alone - I just don't ever do it.
eating food phuong trang