Posted by The Food Ho on July 23, 2008
So, Friday evening, the FP decided we were going for "just some appetizers and wine" at Farmhouse Cafe. Our friend Mr. Hot Redneck from MI works there and we haven't been there yet. The truth be told, we are very poor at managing our money. And I really am not into the more upscale dining like I used to be. It's just, you can spend all this money to be sorely disappointed. You know, I guess it's like, say you had a choice between a bj and genital intercourse from a fairly attractive prostitute in that seedy prostitute way for a reasonable price, or you could get your dick touched by some pretty girl, to the point where you get a boner, but she doesn't finish you off. The price for the second scenario is 3 times as much, because she's an "escort" and is not required to do anything she doesn't want to. And you've already taken her out for dinner and drinks like a "date" on top of that. Which one would you choose?

Anyway, I'm not sure what we were discussing in this episode of the pork porn pages. Oh yeah, the Farmhouse Cafe. It's On Adams Avenue right by Park Blvd. It's tiny and it's owned by this french chef and his wife. The logo has a duck in it, and there are like wooden duck figures lining the back of the banquette. You know, like all a little different, different poses, colors, and they look like they were imported from France. But there was no duck on the menu! What a tonguetease!!! No tender duck breast, no sexy leg confit, no foie.... Man talk about needing a cold shower, or a cold glass of water.

Basically, they are going with the farmhouse style. The FP's mom and sis would probably love it because they like farmhouse stuff. You know, wood, wicker, cute baskets and things. The place is nicely enough decorated - except the bar. It's a nice big bar with about 15 seats, but it's made of that stuff. I want to say melamine, but I'm sure I'm wrong. It's the stuff that kitchen counters were made of in the 50s, 60s or 70s. You know? The stuff that's just a sheet, so each side of the countertop comes together at right angles with a black seam. It was yellow I think. Anyway, it sucked. Farmhouse - I think wood. I just wonder what they were thinking. Anyway, I'm not an interior designer - I have a freaky, ugly, kind of Punky Brewster/Blossom kind of style - none at all.

This is about food anyway. So we sat at the lovely bar, on the side near the the window. There was a mirror on the wall reflecting into the kitchen, so from time to time we saw our buddy. He didn't know we were there. We were hoping to eat before he saw us. We got some wine. I can't remember now. I'm not a wine afficionado. I can't even remember the grape at this point. Anyway, it was really boring. That's okay though. I don't know anything about wine, so I could give a shit.

So we got some bread and butter. The bread is from Bread & Cie, which I have never been to, even though it's supposed to be amazing. The bread was cold in the middle, which was strange. It was good, just cold. I figured there was a bread holder on the wall, and maybe an air vent was blowing on it or something. Weird.

So the first course, we ordered the chicken liver mousse and the heirloom tomatoes with fresh mozzarella. 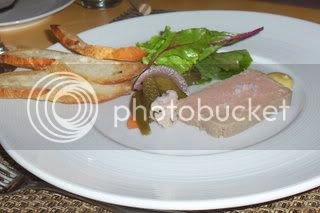 So the mousse was really good. It was not very livery, which for me is a good thing. I love foie gras of course, but other livers, I'm not a big fan of. But one can make chicken liver pate tasty. Anyway, it was nice. It was garnished with some nice chunky sea salt. The pickled veggies were really good - cauliflower, cornichon, carrot, green pepper, I think. 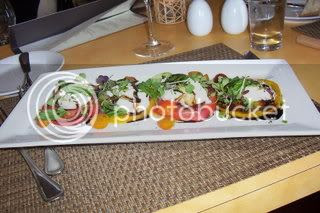 The heirloom tomatoes were okay. Not great. There were red and yellow. The yellow ones were much better than the red. That's not so much the restaurant's doing. I mean, I think they didn't grow them. And you can taste stuff, but not necessarily every tomato. And they are expensive, so you can't throw them out. But with the balsamic vinegar and extra virgin olive oil, you mean evoo, hehehehehe. I'm really sorry. You know how some people get viruses and worms on their computers? Apparently I have this recurring Rachel Ray virus thing going on. Hopefully it's not contagious. Anyway, the tomatoes were okay. The little baby cherry or grape ones were better.

The FP pointed out how his mentor, chef at Rio Mar in New Orleans, taught him to cut heirloom tomatoes in chunks. That way they retain that meaty juicy quality that we love them for. Coincidentally, the chef at Rio Mar is also meaty and juicy.

The first mozzarella slice I tasted was kind of soft, like it wasn't kneaded enough, or it was sitting above the waterline. It was kind of mushy, and not so good. I'm not saying it was horrible, just kind of a bit of a distraction from the rest of the dish. But the other one I had was fine. While I'm criticizing, I'll also say that we had hoped for some sea salt on that dish as well.

So by that time, the place had a bunch of people in there. For some reason they were all on the front side of the restaurant. Actually, the reason was the windows. All surrounding us. The FP felt like the building was going to tip over. Interestingly enough, it was all mostly older patrons. We decided we were the most attractive ones in the place, and we aren't conceited. Okay, the FP is. But I kind of have self loathing issues and whatnot.

Anyway, our friend spotted us and came out to say hi. So I don't know if that changed the outcome of what we got next at all. I'm going to say no. Because it wasn't busy yet, and we didn't get anything crazy. We got the mussels and the escargot rissotto.

While we were waiting, the chef came over and said hi. He introduced himself. Turned right the the Food Pimp and said, so you're a personal chef? So he asked about all that, and the FP gave the spiel. Then he asked if we were from Michigan. We said no, New Orleans. So the chef asked, how do you know Mr. Hot Redneck from Michigan, then? I told him that I had worked with Mr. Hot Redneck from Michigan at the last job that he worked at. This was news to him. Mr. HRFM never bothered to tell him that I had previously been Mr. HRFM's boss. This only supports my theory that Mr. HRFM does not respect me culinarily speaking as any kind of authority. I believe, him being a younger cocky cook, that he thinks he's better than me. But that's how they are -those younguns. Me, I'll tell you what I know, and I won't bullshit it - unless maybe I'm interviewing for a job. I even made a blunder during cooking classes admitting that I had never done the recipes... But anyway...

The chef then asked what we played in the band, and he made a comment about how we were needing all this time to go on tour or something. He was trying to make a joke out of something that is not amusing to him. I think he gets pissed off when we play shows because Mr. Hot Redneck leaves work early about once or twice a month on a Friday, Thursday, or Saturday. So the mussels were nicely cooked. But there was no broth in the bowl. They put a big thick slice of bread down there, and it absorbs all the liquid. So you cut off a piece of it and get all the flavor. My first bite was very...gremolataey. Well, really garlicky. It was good though. The mussels were mild. The shaved fennel seemed weird, but I think it worked.

The rissotto was al dente. Okay, some grains were just not cooked. Not all though. It had such a good strong, fresh, parsley escargot flavor though. And then there was a lot of cheese. I used to love oodles of cheese on my... everything, but now, not so much. Partially because I moved here, and I'm used to different things, and partially because I started facing the fact that I'm kind of lactose intolerant - being Filipina and all. So to spell it out for you, some types of dairy gives me bloating and stinky gas. There. I wrote it. Now those of you who didn't know know now.

Oh man, I really enjoyed this meal more than it sounds. When we got to the bottom of the rissotto, all the rice was perfectly cooked and it wasn't as cheesy. It was perfect down there. If only the first part had been that good. But we've all sent out not perfect rissotto. I'm sure I have more than anyone. I'll admit it.

Anyway, we looked at the dessert menu, and there was no creme brulee on it! That's what the FP wanted. It's like his favorite dessert - maybe next to tres leches, I'm not sure about that. So that was our meal. We left all the wbite heads to take over. They could fight over who was the most attractive after we left.

So I'm not sure how to rate this place. I mean, I'm more of a tango than waltz kind of girl - not that I know how to do either dance. But you know what I mean. You know, the whole tasteless prostitute metaphor.... I realize that my readers (not my pass by looking for weird porn visitors who never return) are very intelligent people. So I don't have to overexplain things like I do. But I tend to do that in all aspects of my life. But getting back to the readers. That is very flattering, ya'll! I cain't bulieve all ya'll smarty panties takin tam out o' yo bizy skedules to lookit this cher lil ol bloggy blog o me. No, seriously, you people should be reading blogs about Stephen Hawking type shit instead of mine. Here's a link: http://motls.blogspot.com/ Go ahead and copy and paste that when you're all finished up here.

So should I rate this place? I think that sometimes, Mr. Hot Redneck's friend - who works in the kitchen with him - might pop in and read this blog. So I'll pose the question to you, Laotian Flower - should I rate Farmhouse Cafe, or should I wait until I've had more offerings there, say, entrees, brunch, etc? What do you think?

Anyway, after this, we went and met our friends at the Whistlestop. I had vodka tonics and started this "carwash dance" thing. We were sitting in the smoking alley, so when people passed through, they had to squeeze between us. So I thought that we should dance while they squeezed through, and I would say, "dancing carwash". If I were wittier, I would have said "dancing personwash" or something more fitting. Anyway, everyone half assed did it for the first few people, and then I was the only one....So maybe on that note, I shouldn't rate the Farmhouse Cafe just yet.....
eating fancy dining farmhouse cafe food

Teena in Toronto said…
Quite the feast!