Posted by The Food Ho on July 22, 2008
So, last Thursday, the night after the sorry "adobo", I decided to take a miss on the cooking, so I ordered takeout from Vo's Cafe. Luckily, I had the takeout menu, so I ordered ahead. It was around six o'clock. He told me it would take about 10 minutes, so I went to get water at the store, then I picked up my food. When I got there, there were two guys on either side of the place, waiting for orders. Then when I walked up to the window (it's a stand on University Avenue near Aiberto's), the phone rang. Someone wanted to call in an order. This time, he said it would take 15 minutes. I guess they were busy, which is good. I want this place to thrive since it's so close and it's not bad.

So this time I got an order of eggrolls and the BBQ chicken and beef combo that comes with a spring roll.

So I ate the eggrolls for my dinner. Yeah, it's kind of juvenile, but part of being a grown up is eating what I want to when I feel like it. Actually, I deal with a lot of denial - if it weren't for that - I would weigh 200 pounds more than I do. 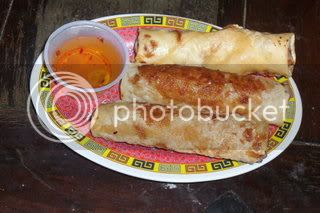 So the eggrolls were hot, crispy, and good. They were filled with noodles, carrots and barely discernable pork. But the pork isn't important if everything else tastes good, after all its fried food. The nuoc mam just needed a little more vinegar and some siracha, then it was good to go.

Then of course, I had to taste the combo while it was hot. The fried rice was light and had some egg. It didn't have that fried rice food coloring, which was nice. The BBQ chicken and beef were delicious. Sweet, rich, a bit spicy, just really good flavor. 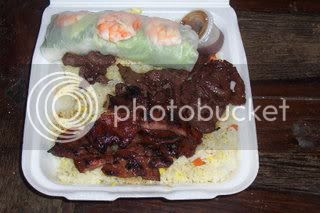 When the FP came home, he took the spring roll, dipped it in the too sweet sauce and set it aside. So I ate it. It was cold and a little soggy. I should have let it come to room temperature a bit, but I didn't. I ate it with fish sauce and siracha, and it was okay. The pork in it was a little dry, but the mint was nice and fragrant.

The funny thing about spring rolls here, is that they seem to be bigger than on the east coast. Now this one wasn't as big as the ones at Saigon, but it was still tubby. I don't know if the Vietnamese here are compensating for something or what...
I mean, I guess it's half as much labor to give two jumbo rolls rather than four skinny ones. But this just means there's just a lot of noodle in them - so proportionally, there isn't as much other stuff. I mean, the wrapper is made out of rice, the noodles are made from rice, it's like a triple starch! Anyway, that's just my thoughts on spring rolls....

But you people should try Vo's Cafe if you live in north park. It's pretty cheap and pretty good for the price.
eating food Vo's Cafe