Posted by The Food Ho on December 09, 2008
So, I figure I need to post this before it is about a meal we ate the year before...

Thanksgiving. It was so long ago, I barely remember it. No, actually that's not true. There's some stuffing in the fridge still to remind me of it. Yeah, I know, it's gross that we haven't thrown it out. Don't ask me why we haven't. We've been busy, you know.

So we were pretty prepared for Thanksgiving. I think we only had to go to the store once on Thanksgiving day, which is unusual.

The night before, of course we were busy at work. Also, I got meeting notes from my boss for a meeting that we never had because she came in late. Pretty much, reading these notes put me in an awful mood. It wasn't nice. Maybe she didn't mean for it to be as nasty as it seemed, but I took it in a nasty way. I work pretty hard for this place, and my back has been fucked up for over a month because of this place, but I don't get any gratitude. When they see me, they just see dollar signs, as in how much money they have to pay me, which is nothing. I'm crazy to have taken this job for the pay. So I didn't really sleep well, and we got up early, even though everyone wasn't coming for dinner until 5 or later.

So anyhoo, the Food Pimp had done a lot of the work the night before. And he did a lot of the work on Thanksgiving day. I was pretty useless. But he had all this extra energy anyway, so doing 80% of the cooking kept him more or less occupied.

So here was the menu:


To drink, we had some Cristalino champagne, some red wine - tempranillo, I think, beer of course, and our friends brought some booze too - miller lite cans from Mr. & Mrs MIphone, strawberry wild vines (I swear) from Ed Kowalcyzk, and Captain Morgan Tattoo (we forgot to crack that open, thankfully) from The Plunderer. Mr. Interested in You and Valley Girl came after dinner and brought Miller High Life.

So, all I made was the stuffing, the green beans and the tart tatin. The FP did all the rest. It was one of the least stressful holidays for me, even though I was thinking about work. I still got drunk and had fun though.

What sucks though, is that I got drunk, so I forgot didn't take too many pictures. I pretty much always do that! What is wrong with me?! Oh, yeah, I get drunk.

Here's the shrimp remeloude and fried green tomatoes salad. For those of you who don't know what remeloude is - it's basically cajun 1000 island dressing. But if some diehard neworleanian read this they might get pissed. I'm so controversial. 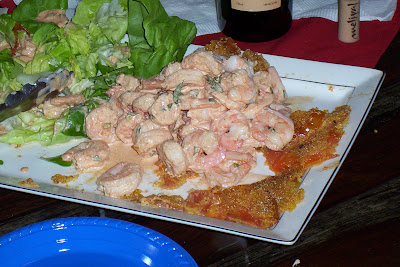 Here's one picture. Quack on a rack. A very reputable brand of duck. 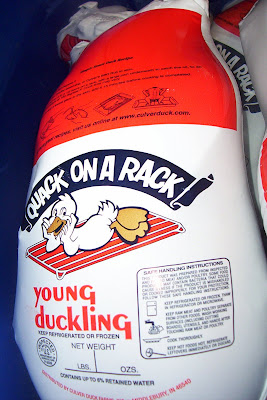 Here's the ducks in the oven. 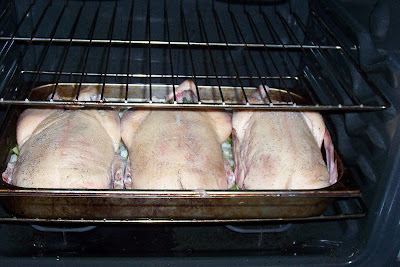 Here's when they were done. 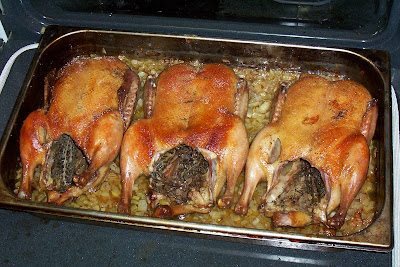 They were beautiful. The FP brined them with citrus.


Here's the mash and stuffing. 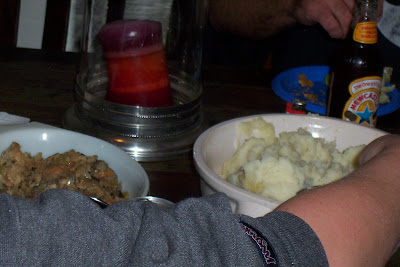 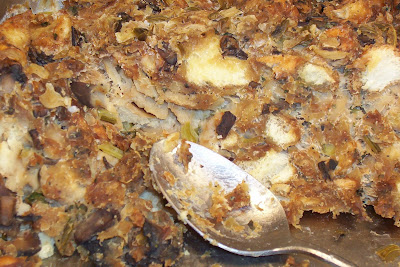 Yeah, I know. Thanksgiving was like almost a month ago. The fridge is pretty empty and fairly clean by our standards. But for whatever reason the stuffing never got thrown out. I don't really clean the kitchen. That's the Food Pimp's domain. We haven't been grocery shopping since maybe Thanksgiving, so there's nothing else in there. Actually, I'm going to have to finish this and then clean the fridge out, because now I feel gross and dirty.

Anyhoo, I don't have a picture of the tart tatin. It wasn't that great. It was okay. But I should have left it in the oven longer, but I panicked because I didn't put it in soon enough. Basically, I forgot about it, until the FP asked me if it was in the oven. So, it wasn't as dark as it could have been. Then I tried to flip it. I didn't have a plate big enough. I once did, but the FP lost it or broke it. It was a wedding present plate. Anyhoo, I tried to flip it into a hotel pan, and all the apples slid off the puff pastry. So I had to mound them back on. Well, it tasted much better than it looked, anyway.

So, yeah. I have to go clean out the fridge now. That's all I can think about.
cooking eating food thanksgiving dinner