Posted by The Food Ho on January 05, 2009
So, the weekend before Christmas, the Food Pimp's family were missing his cooking, so they had him go home to Punxsutawney,PA, to have Christmas dinner on Saturday.

So, I dropped him off at the airport Friday morning, then I took a nap, then I woke up and got ready for work. But I didn't eat. There wasn't food at home. So I went to Picante's before work and picked up a burrito. The FP hadn't been gone for more than 6 hours, and I was already living the bachlorette life. I got a carne asada burrito.

I don't quite remember it. It was sustenance. I have to say, that since Picante's changed ownership (this is the one on 30th by Upas) I haven't been too excited to support this place. They are doing renovations, I guess, and it never looks like it's open even when it is. The menu is different, I think. I know I'm biased, but I don't think it's as good. There was nothing wrong with my burrito, but they used to be pretty delicious before. The FP always got cabeza, lengua and carne asada tacos, and they were always good. They also had good salsas. Anyhoo, that was my first meal as a single girl.

So, the next morning I was still trying to catch up on my sleep. I'm a chronic insomniac. Any change in my routine or any little thing in my life that stresses me out causes me not to be able to sleep. So being cold in bed with just Stinky next to me did not help me catch up on my sleep. One of those nights I watched what must have been the 2 very last episodes of Three's Company. They were not funny at all - very serious with heavy dramatic situations. But I watched them. It's ironic how the least attractive woman always gets married first on these shows, and the dumber one always goes to do something more exciting and or noble.

Anyhoo, the next morning, I didn't feel like cooking, didn't want to go get anything, so I went to the grocery store and picked up special K fruit and yogurt cereal and some soy milk. $3 for the soy milk, $3 for the cereal. I had 2 - 3 bowls of it for lunch. I believe I ate some food at work for a little snack that evening at work - pasta probably. Then I went to Del Taco after work. Have I told you about my obsession with Del Taco recently? Yeah, well, I'll tell you again.

When we first moved to sunny SD, I saw Del Taco, and I was like, what's Del Taco? A less successful version of Taco Bell? I made fun of it - fries with tacos? Then late one night after work and drinking at the Tivoli Bar, we went through the drive through. It was a revelation. Yummy seasoned ground beef in the taco and burrito, hot crinkle cut fries - way better than Taco Bell. I've been a Del Taco fan ever since.

So this night, I went through the drive through and decided to do a very daring and adventurous thing I always wanted to do. I figured, I can do anything I want, that doesn't violate the sanctity of marriage (okay, there were a few things I might do that the FP might say violated the sanctity of our marriage - like watching a 90210 marathon or something) I ordered a hamburgesa. I always just wondered what a hamburger from a taco place would be like. Either really good, really bad or just so so. So I got one. Double cheeseburger. 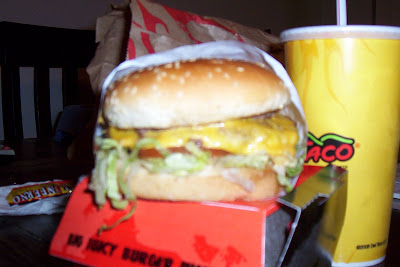 It was a flop. Kinda like a cold McDonald's double cheeseburger. Those thin kinda hard patties. Wilty lettuce, crappy tomato. That half melted american cheese. I think it might have even had some kind of "special sauce" on it. Which was interesting, but did not save the burger. Maybe if the meat had been hot and fresh it would have been much better, but it wasn't. And the fries were cold. Ah, the single life seems so glamorous when one's lugging around a big old ball and chain, but once that ball and chain are detached, one misses limping around with the heavy thing........
del taco eating food single life