Catching up with The Food Ho Part1

So here's a picture from Dec 2nd. 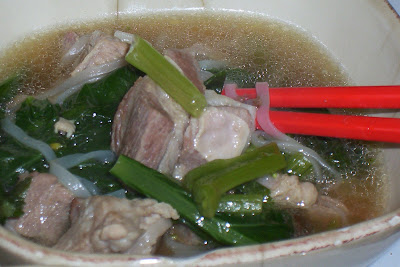 This is country sparerib soup. Delicious. Fatty greasy soup that leaves a sheen on your lips and lubes up the digestive system, if you know what I mean.


Here's some pictures from El Salvadoreno 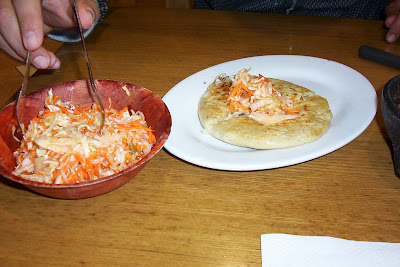 So we got a jalapeno and queso pupusa. Delish. Of course. 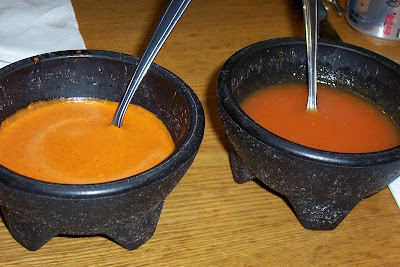 Here's the 2 salsas. The chicken broth one on this particular day doesn't seem to be bubbling, but we didn't use it anyway. 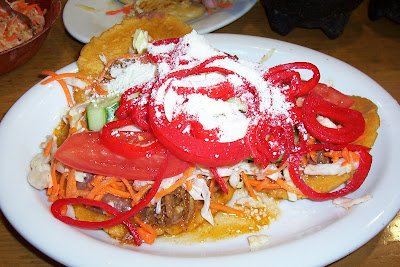 I tried the salvadoran enchilada. It was with thick crunchy hand made tortillas, shredded beef, carrot, tomato, cabbage, cucumber, pickled onions, grated cheese. It was different. Really good. Not the type of thing I would eat often, but I basically ordered it for foder for this here food blog thing. It was really good. Sometimes the tortilla was hard to eat because it was so thick and hard where the sauce hadn't seeped into it. 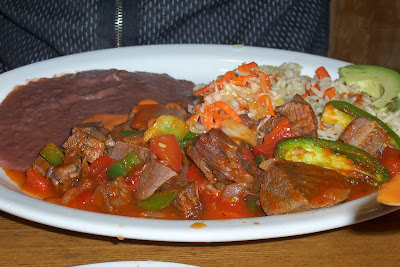 The FP - Mr. Adventurous - got the lengua guisado. Well, okay, he either is very adventurous, and we go somewhere new and get new food, or we go to an old standby and he gets one of the few standby dishes. I guess I do that too. I just know that if I didn't clarify that sentence - the Mr. Adventurous dig - I'd probably be hearing something from him later when he reads this.


So on Dec 18th, we went to some Vietnamese place on Convoy St. about 2 or 3 shopping centers from Daggett. I don't remember the name - but it's better that way.

So we were driving around looking for someplace open at 8 or 9 am, like we do sometimes. This place was open. It was freezing in there too. They had the door open and it was windy, and there were lots of fish tanks lining the wall. So the FP is obsessed - OBSESSED - with hot wings. Really. So he likes regular teriyaki type wings too, because they remind him of how much he likes hot wings. So, yes, we got these teriyaki wings at like 8 or 9 am. They sucked. 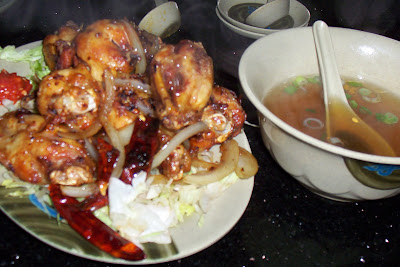 Here they are. You can tell they suck just by looking at them. They aren't golden enough. The thing with wings that the FP always preaches about, is that it's hard to overcook wings. Because you want the outside crispy and crunchy and hard. And you want all the meat inside to be opaque and cooked, not translucent in the center, like these were. The sauce was just okay I think, but the meat itself was not good. Why didn't we ask them to cook them longer? I'm not sure. I don't know if we don't like to bother, or if we are scared about sending food back into the kitchen with a cook who may be offended. Maybe both. So they sucked though. 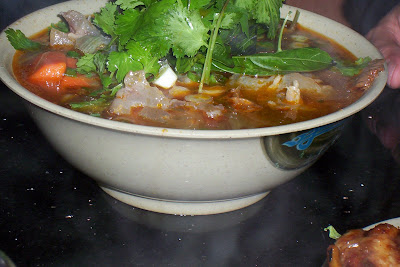 The FP got the combo pho. Big Surprise! No, not really. I was being sarcastic. Mr. Adventurous. Pho is his standard control testing menu item for new vietnamese restaurants. He knows what he wants it to taste like. I believe he thought that the meat was cooked nicely, but overall, not so great a bowl of soup, probably. From what I remember. I mean for god's sake, it looks like there's carrot or something in it! 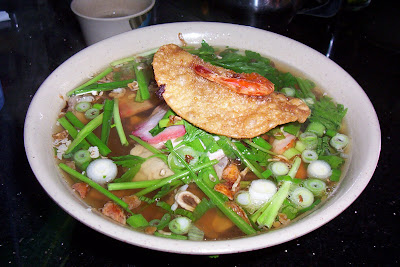 I got My Tho's Soup. This is the great soup we get at Phoung Trang, so I thought I'd see how some other random restaurant who's name I can't remember would do that same soup. It was pretty damn disappointing. It had that pork with the pink curing brine, that wasn't particularly tender or delicious. It didn't so much have the baby celery, as it just had the leafy end of the celery in long sticks. There was some shrimp in it. The most interesting thing was the fried wonton garnish with a shrimp on it. I ate about half of it because I was hungry. But it was the poor white trash version of Phoung Trang's My Tho's Soup.

So, I don't know if you noticed how I didn't apologize for being slack on my food blog writing, or say how my new year's resolution is to write more. Well, I'm not gonna say those things. No new year resolution for me. My resolution is to just survive. I gotta keep chugging along, even though sometimes I feel like it's gonna kill me. I feel like a Toyota. Reliable. Dependable. Maintenance free - until you take it to the garage years later and find out there are all these minor problems that are a few thousand miles away from being serious costly problems. But all these minor problems add up to a costly expense that you can't afford. And how do you decide which ones to fix first? Damn. Those holidays really left me drained.

You know what? I change my mind. My resolution is to complain and be as negative as possible. More negative than my standard. That should be a real challenge. Let's see if I can do it....
eating El Salvadoreno food

caninecologne said…
hi FH!
i finally ate at el salvadoreno yesterday! man, their shit is good! i remember seeing your posts about it and mmm-yoso's. i would totally eat there again!!! we had pupusa (mixed and cheese w/loroco), the carne guisado (OMFG!!! awesome), fried plantain chips w/chicharrones (thick ass pieces of nice fatty pork)...

I'm glad you tried El Salvadoreno. It's kind of like brainwashing. You hear about it enough, you try it, then you become a believer! I looooove their chicharrones!

caninecologne said…
hi fh! i can't wait to go there again and try some other shit. like more pupusas and tamales. the way you described how good they were made me curious...what i also like about that place is that it's clean. it's not a rathole. their bathroom is clean too. yeah, i check for those things. by contrast, the bathroom at phuong trang is fkn dirty! if anything, i try to hold it in rather than use their bathroom!!!! it's the kind of bathroom where you want to roll up your damn pantlegs because you dont' want it touching the floor.
sorry i ended up ranting about dirty bathrooms. but yeah, el salvadoreno kicks ass.
January 11, 2009 at 5:42 PM