catching up with the Food Ho, part 6?

Posted by The Food Ho on February 02, 2009
So, I'm lost. If I had deadlines on this blog, I'd probably never get behind. But I dont' have deadlines. This is for pure...enjoyment? Posterity? What? I'm not sure. It's weird. Because when I write this, the Food Pimp will wander in and look over my shoulder, and it bugs me. It stifles me creatively. We share everything. We don't even have exclusive his and hers toothbrushes. Oh, don't tell me that's gross. How many of you make out with your dogs? I got to watch Mr. HRFM make out with his dog for like 5 minutes one night. Sure, he was putting on a show, but he let the dog lick his mouth out. At least the FP doesn't lick his anus or eat cat shit....

Anyhoo, I found this picture of pizza. 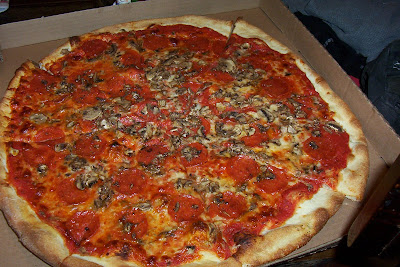 It really is not the same pizza that wrote about in Catching up with the Food Ho, part 2. The time date stamp on the two are different. But both are Luigi's, and both are mushroom and pepperoni. So Luigi's is great. But there's something weird about the place. The pizza that we've had for lunch seems to be better than the pizza pie that we've ordered at dinner. Isn't that backward? Here's my assumption. They bake the pies for about the same amount of time all the time. 10 -12 minutes? I don't know how long. But the pizza is really thin. Like, when they are tossing it, it's so thin that it is almost transparent. Then they bake it. And it cooks quickly. But then, they put half of the pies in the display for pizza by the slice. So you pick your flavor, then they reheat it and send it on a gastronomic journey. Well, I think they cook it just long enough, so that when you reheat it, it's perfect. Did I already say this before? Well, I'm just driving the point home, is all.

So here's another old picture: 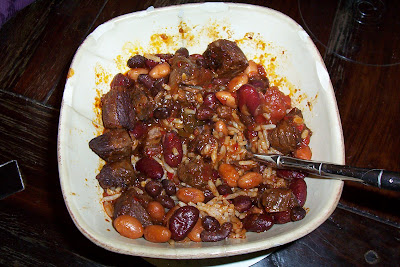 Chili, Food Pimp style. So yeah, with the diced beef instead of ground beef. I think this is a whole different style of chili making that we are not adept at yet. It's not as easy as using ground beef. Note the 3 different types of beans too. We just love beans.

So, then there's El Faro on Imperial Ave. We were so excited to move to the area, then we ended up barely ever setting tire on Imperial until the last month or two. I don't know why. It's walking distance for golly's sake! But one day we went there and decided on El Faro. It was a stand alone restaurant that just caught our eyes. So you walk in, and get the feeling that it used to be an old fish and chips place. It appeared that the grill area might have been diner counter space before. I like that kind of layout. The FP kind of doesn't, but if you're eating alone, it makes you feel not as stupid.

Anyhoo, this place was not so good. Just take a look: 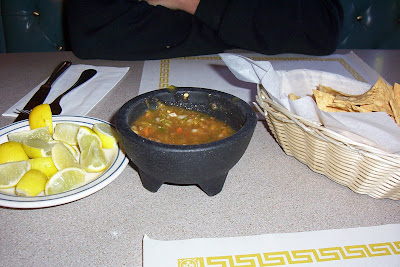 The salsa was probably the best thing. It was different than other salsas. I guess they all are. Anyhoo, we liked it. I think it had a smoky flavor in it. 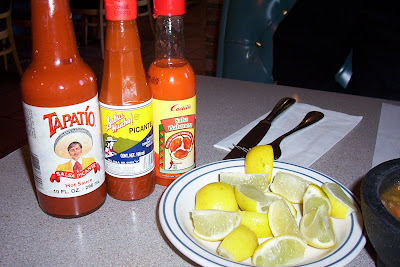 Let's focus on the condiments, shall we. Okay, 3 hot sauces. That's fine. TapaTio is standard. Then the other I don't recall. Then a habanero sauce, which I remember liking. It was not so hot that you couldn't use more than a drop, which I like. But the lemons. Why so many? That scares me. First of all, you know they are recycling. Which I'm not a big clean freak, given some of the places we eat at, and given the FP...if you know what I mean. Anyhoo, when you recycle food like lemons and bread, that's just more and more potential fingers and hands and what not touching something that you are going to ingest. And, I'm sure half of you saw that Food Detectives episode where Alton Brown cultures the bacteria from lemon wedges that they serve with drinks in various restaurants....Anyway, the results were shocking for some, I suppose. But really, what disturbs me about the number of lemons given without request is that why does a seafood restaurant give out so many lemons? Lemon is supposed to compliment the seafood, not cover up fishyness. Some culinarians even shun the lemon altogether to get a real au natural taste of the seafood itself. But we ordered anyway. 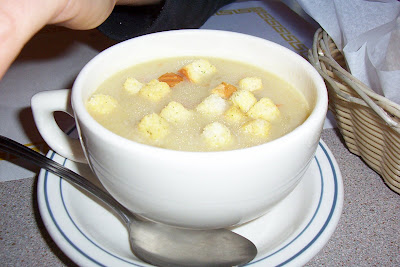 So clam chowder. It just tasted like flour. Not so good. 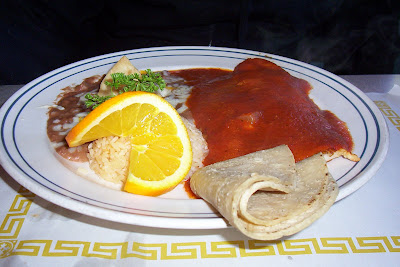 Shrimp Diablo. You can't even see the shrimp because of the thick sauce! Crazy. It reminds me of that time in Nola when I found a mouse in the bathroom. It was so tiny it was under the mat in the bathroom, and I happened to see it somehow. I got my mouser cat, TikiTee to take care of it. And the thing was so teeny that he didn't see it at first. He was like, what the fuck did you drag me in here for? So he chased the thing out onto the balcony where it took a flying leap off. We saw the little body on the sidewalk sprawled out. Then a few minutes later I looked and it was gone - very Friday the 13th. Did it live? Or did a cat see it and scoop it up? We'll never know.

Anyway, I know you're not supposed to write about food and rodents in the same paragraph, but I've already done it. So, Shrimp Diablo. Thick red sauce. It was mediocre at best.

What did I get. Fish tacos. I was guessing it was a fish tacos kind of place, given that it looked like it used to be a fish and chips place before. 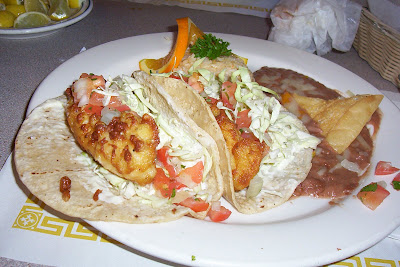 The beans were too mushed. I like a little fifty fifty mush and whole bean. The FP likes whole beans. I've had worse though. Of course I had. I'm waiting for that mexican meal though, that is the worst. That will be a day! But the fish tacos. They looked nice. Big huge pieces of what I'm guessing is tilapia. But they were kinda too big. I would have liked 2 pieces half the size. It was not horrible, just a personal preference. And the white sauce got kind of warm being on the fish. It was kind of pukey. But I ate it. I was starving. Not too good though. Kind of expensive too. I think the meal was around $30? So, I'm not going to give this place a chopstick rating, because it doesn't seem to warrant that. It's not even on the map, and we only did go once. But if I were going to give it chopsticks, I'd probably give it one - \ - for the salsa, which I don't remember, and the layout of the place, and the closeness to our apartment......
bad food chili eating luigi's pizza