Posted by The Food Ho on June 06, 2009
So, every year, there comes a man bearing gifts...gifts that we pay for. He drives a semi, so I've heard, all the way from Loosiana. And he deposits it at Qualcomm. And we pay good hard earned money to go there and partake. And what started out as a small alumni gathering has become a San Diegans eating a rare delicay once a year tradition.

What is this red jewel of the bayou I speaketh of? What is this tender little pinching morsel so beloved that idols have been reproduced to hang on strings of pearls and cast from high above to worshippers from below, some bearing their own fruits (specifically melons) for the honor? CRAWFISH you dumbass.... duh. no doy!
Didn't you read the blog title?

Anyway. Our friends, Mr. Male Nurse in Training and Mrs. Sexual Innuendo are members of the LSU alumni. So every year they buy the early tickets for $45 instead of $50. So we got 4 this year, and Mr. Interested In You and Valley Girl went too. So it worked out, because Mr. IIY picked us up and we drove to the valley, where guess who lives....? So we walked from her condo. The sun was just coming out and there were maybe 2 clouds in the sky. Perfect. So we got there, walked in and headed straight for the beer truck. Four beers that were prepaid with our tickets, please. They had Kona this year. So we pretty much drank like...well, almost like frat boys. Maybe like sorority girls. The thing is, it's all you can drink for the first 3 hours. So you figure, to get your money's worth you should really drink like 10 beers. That's kind of impossible for me, but it's fun trying. But it's really about hanging out on the nice grass of the practice field, listening to that insufferable zydeco music which is actually enjoyable on this one day a year and waiting for the crawfish.

So the feel this year was different. We get our table through a friend of Mr. Male Nurse and Mrs. Sexual Innuendo (no, she didn't take his name when they got married) who organizes the tables. He got four tables this year, and he overbooked - and the event was sold out. Which means, he had to buy a ticket from someone outside the gate who needed to get rid of one. So anyway, we had our table. Table 15. So we put our belongings there and were hanging out. All of a sudden, this asian gang comes and seizes our table. There are 10 of them. They set up a tent, and next thing we know, the tent is over our table. So we were pushed over to table 19. No problem. There were still only 7 of us so far.

So then they go to get crawfish. We are very excited!!!! It's like Christmas in May!!!!! 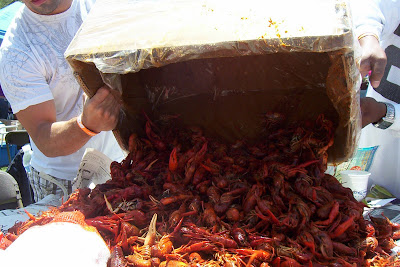 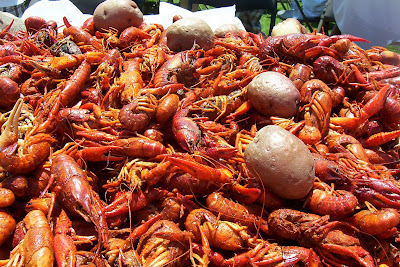 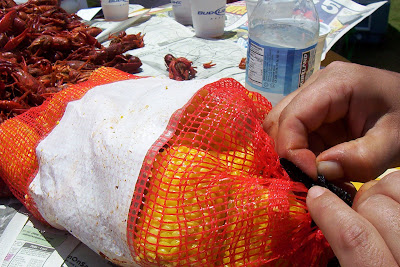 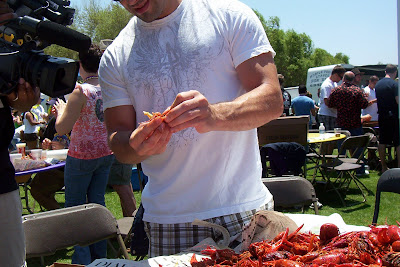 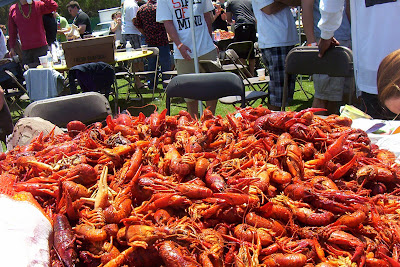 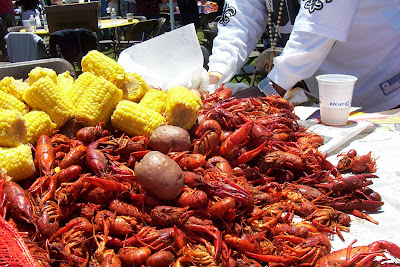 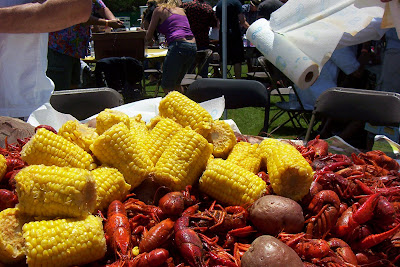 So we each take our seat. The Food Pimp shows MR. IIY and VG how to eat dem crawdads, and they dig in like they've been doing it for years. Mr. IIY is suckin dem heads too! So we are very happy. These are pretty spicy, but it makes the beer go down faster. And we are all making our little piles of crawfish carcass. The thing is to make your own. It's kind of a challenge thing - I ate twice as much as you... Out of nowhere, these 2 asian couples descend on us and sit down. We met them the year before, so they were pros. They took there seats, and just started digging in. And this one guy next to me was holding their baby, so the wife was peeling and feeding him. And she was adding to my pile!!!!!!!!!!!!!!!!!!!!!!!!!

Yeah, I'm Asian - Pacific Islander. But they shamed me and intimidated me that day.

So we didn't have any crawfish left. The few measly ones left were picked through by the one glove wearing lady with the husband and baby and put in her gladware container. Stupid me, I had brought an Albertson's insulated bag. It was empty. Last year we had so many crawfish left over, that I had been very optimistic about this year, and we got none.

So our original table - table 15 - which had been hijacked by the asians was empty. Out of nowhere, they came, took our table, put a tent over it, got crawfish, put their gloves on, chowed down, ate all the crawfish, cleaned their table, took down their tent, then left. All in the span of like, 2 hours. They were good. Too good.

And then 2 o'clock was fast approaching, so we drank and drank. At 10 til, everyone got in line for the last freebies. We all got 2 each. And we sat, and mine got warm because it was hot and I couldn't drink fast enough. Some time later, someone bought me an expensive $2 beer to replace the warm free ones.

Then it was time to go. But we weren't sure how. No one had a car and we were all pleasantly drunk. So we called 2 taxis. And we went to True North. We were there for hours. Some food was ordered 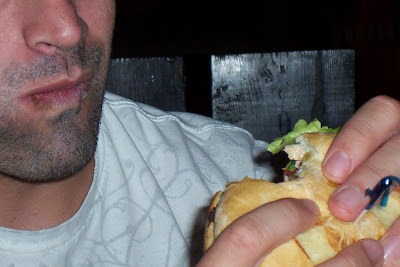 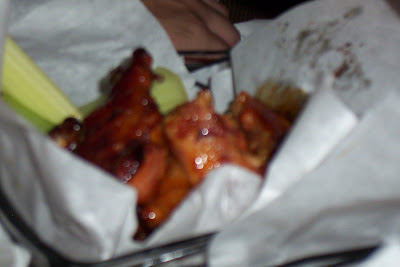 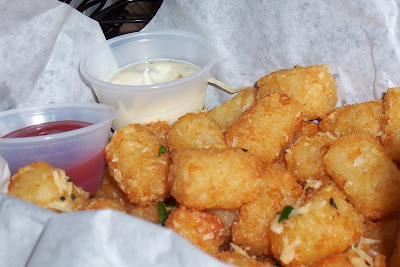 I remember there were lots of tots. They come with like garlic and parmesan on them. They were good. The wings were....sweet. There was like teriyaki sauce or something on them.

So we were in one of the big booths, and the "men" would go out to smoke and then come back. Only one time they didn't come back. So us chicks were sitting there by ourselves. Finally, we went outside, and they were cozied up to the bar out there watching the basketball game - all us ladies forgotten. And they were completely shitfaced! I mean ASS SHITFACED!!!!
Fucker TFP basically had to be led out to the front. He had gotten cut off by the bartender too! So I managed to get him out front. And then I realized I really needed to pee. So I made him lean against a window while I ran back inside. I walked back out, and he was sitting on the sidewalk. So we walked a block and got a cab. That was it. The day was done. It was a great day with an obvious end.

We got home, and the FP went to the bathroom. I was watching TV. Half an hour later I realized he was still in there. So I went to check on him. The door was closed. The light was off. I opened the door and turned on the light. He was naked sprawled out on the bathmat snoring away. So I woke him and got him to crawl to bed. I went back to watch TV. He knocked a glass over. Luckily, it didn't break. He fell out of bed. I went back to the bedroom and had to get him back in bed. The end.
crawfish drinking eating food

caninecologne said…
hi fh!
i remember you telling me about this event. i think it was the same day as something else we went to, but man, i definitely want to go next year!!!! those were some mouthwatering photos of the crawfish and corn!!!!

now, doesn't wearing gloves take all the fun away from peeling and eating the crawfish?

The Food Ho said…
Well, next year we'll have to get a couple of tables for ourselves. Although we'll have to split up when it comes to eating the crawfish - maybe fill the seats with non crawfish eaters....