You Gotta Get Back On That Horse And Eat It

Posted by The Food Ho on September 28, 2009
So, my apologies. I'm not sure where I've been this month. Last month was rough, this month I've spent spare time not doing shit, really.

I'm looking through all the pictures, and there's meals that I can't find. I'm so unorganized that I don't know if I have these pictures or if they are still in my email because I didn't have a camera and used my cell phone or what.

So let me start by riding a pony before I get back on the big horse....


We haven't been cooking lately. I don't know if anyone has noticed, but it's been hot! I know. I'm from the very hot and humid east coast. Aren't I used to heat? No. During the summer, I would stay in the air conditioned house, then walk to my air conditioned car, then go to work, where I worked in a kitchen, so I knew I was going to sweat my ass off. So this is one of the last meals I remember making. some month and a half ago. Caribbean food. Yum! 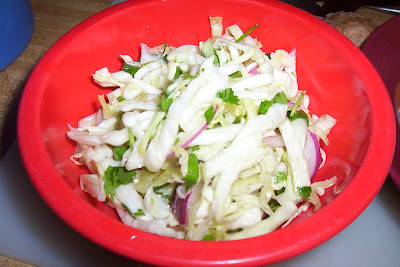 If you've been reading the blog over the years, you've seen this... slaw. But I believe this one was more similar to the original Mango House recipe at the Mango House. So there isn't carrot, but there's cabbage, red onion, cilantro, lime juice, sugar, olive oil, hot sauce. Simple, but delicious and refreshing. 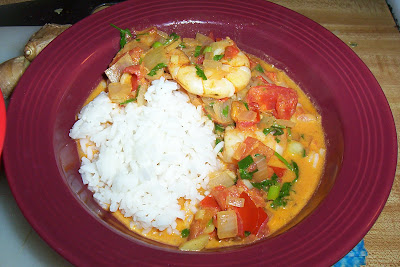 I believe this was the Food Pimp's idea. We didn't know what we wanted, and he said, I think I want Mango House, like shrimp rundown and dum aloo. And I think I said, I don't want to boil potatoes and the yogurt sauce because it's like 100 degrees.

Shrimp rundown is the essence of deliciousness in 15 minutes. It's just like sauteed onion, garlic and tomato, habanero pepper, shrimp and coconut milk. Yum. As the FP would say, yummsies. Yeah, he says yummsies now. It started as a joke, but he keeps saying it. He's very comfortable with his heterosexuality so that he can say things like yummsies, and he can drink from a glass with his pinky out. That reminds me of a story about last night. We were out at the Soda Bar, and this drunk shady Mexican guy bummed a cigarette from him. They shook hands, and the guy said he had an effeminate hand shake. Then he shook my hand and said I had a firmer handshake than the FP. I wish I would have thought of it last night, but I'm not sure if the FP's handshake is effeminate, or the guy just noticed the FP has soft hands. If you've never shook his hand, you should give it a try. His hands are like homemade marshmallows. This lady I work with has dubbed him Soft Hands(real name). So we can call him SHFP for short. Soft Hands Food Pimp. 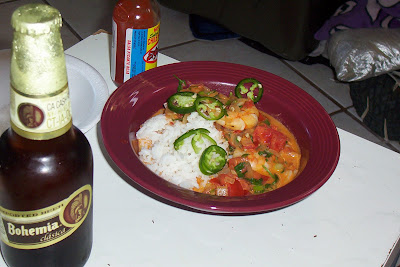 welcome back! that slaw recipe sounds really good and simple to make, and like you said, sounds refreshing.

ooh, i recognized the Bohemia beer - Bert had one at Andres' Restaurant a few months ago.

Am in Chicago - it's raining and windy and cold! we left our umbrella at our new friend's condo (she's a food blogger). dammit - now we have to buy a new one.