Posted by The Food Ho on October 05, 2009
So this is about 2 different days, really. So one Saturday, a while ago, we decided to go to the Little Italy Mercado. We wanted to see how it's grown since the last time we were there. It was much larger. Maybe almost twice as big.

So we went to see my coworker, who has a booth set up. He has a nice little gig going on. I'm not saying he really makes money, but it looks like fun. I'm lazy though. I'm not sure if I would personally want to get up early every Saturday and haul all that shit out there, set up, serve people - some of them crazies - break down, load up, bring it all back to the restaurant, go home take a nap then come back to the restaurant for Saturday night service. But that's just me.

Anyhoo, we walked up and down and looked at all the stuff. Lots o stuff to look at. We got these yummy sausage sandwiches. 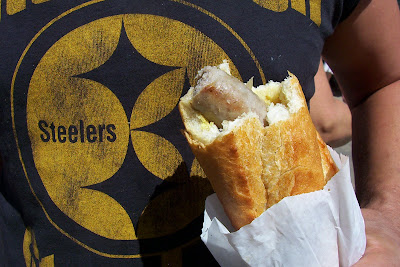 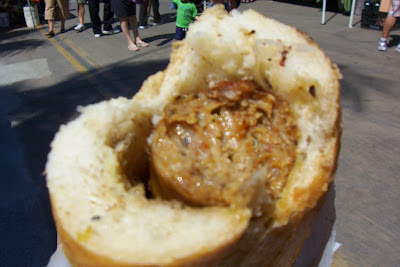 Okay, these are shitey pictures. But they were delicious. One was a bratwurst, the other was a spicy gouda filled sausage. As the Food Pimp says, "yummsies!" This guy does all this charcuterie...salami and other stuff. He gets his pork meat from Niman Ranch I think, so that's some good raw product to start with.


Here's a picture of the sardine guy next to the pork sausage guy: 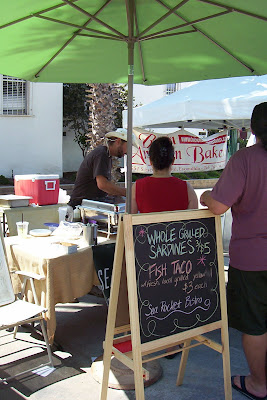 He's from Sea Rocket Bistro. He sells grilled sardines and fish tacos. Local, sustainable, green, save the earth, all that good stuff. I don't recall whether there was the smell of patchoulli emanating from him or not...

We got this beef brisket sandwich next 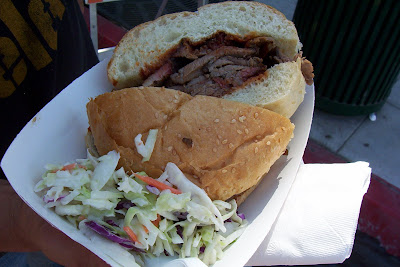 It was...okay. Average bbq sauce. Okay brisket. Coleslaw was kind of boring, but you put the coleslaw in the sandwich instead of next to it, and it was much better.

So we walked around. Then we left. We were still rather a bit peckish. So we were once again in the car trying to decide where to go. So we went to Pokez. The Food Pimp had never been there, so this was as good a time as any to go. The thing about Pokez, is it reminds me of Juan's Flying Burrito in New Orleans. Kitchsy decor, punker staff - minus the really loud music. So we went there. The tall guy with the shaved head kind of seated us. He barely acknowledged us - not sure if it was cause we are not cool or cause he was hungover or he was just high. Anyway, he literally dropped the menus and chips and salsa on the table and some chips slid out onto the table. He said sorry.

So this family came in with a little kid. He had to go bang on the piano, of course. That really added to the ambiance.

So I got a tostada. 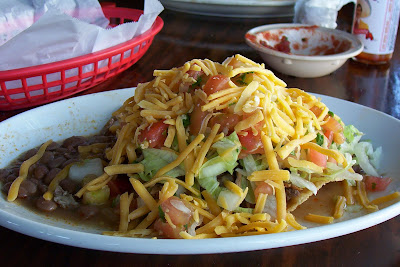 It had cheddar. So authentic...punker/vegetarian friendly/"mexican" The beef was bland. Beans, flavorless, and they didn't even bother to drain the can water off all the way. Alright. It was downright disappointing. Maybe if I had gone to this place when I was in college I would have loved it. 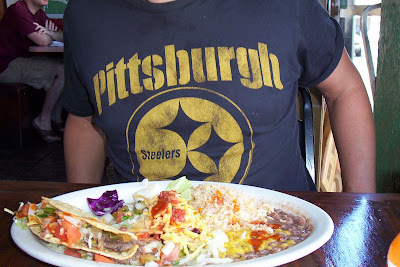 Taco plate. Sucked. Let's just put our balls on the table. I mean cards. It's fairly cheap. Portions are big. It's a kinda hip place. Where else in San Diego can you get a transient to make faces at you through the window while you eat, then walk around the corner and grab some juicy to go box leftovers out of the trash and start eating it, then the emotionless tall bald guy can come out and yell at the transient to just get the fuck away from the restaurant, then the bald guy can come back in and bang on the piano with the little kid. I mean where else? Okay, so the bum wasn't making faces at us, but at another table. It was great. They totally ignored him. Didn't even flinch.

So a month or two previously, I went to Pokez with my friend Marin. That was my first time. 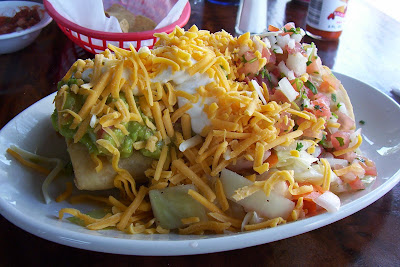 This is what I got. 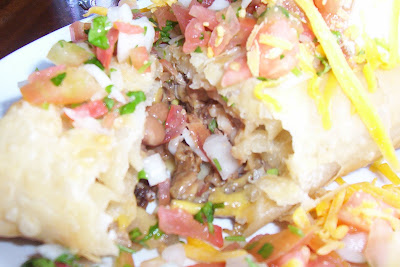 Chimichanga. I hadn't ever really had one. I thought they were smaller. I thought the shell would be crispier than a gigantic burrito dropped in the fryer. I don't know what I thought. 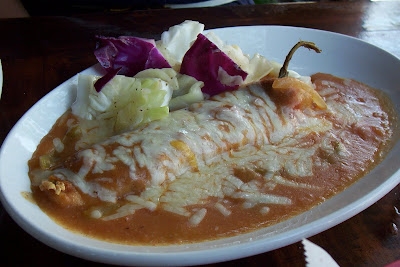 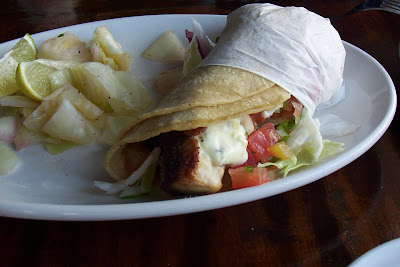 This is what my friend, Marin, got. Enchilada and fish taco. These are the best things I've tried there. I would probably get the enchiladas if I went back. If for some reason I had to go back there. I wanted to like the place, but I kinda feel...too old to like it....
brisket eating food little italy mercado pokez sausage

caninecologne said…
Hi FH - too bad the food and service wasn't so good at Pokez. Hey that's cool guys went to the Little Italy festival. We haven't gone in a few years. It was always fun strolling on India Street and checking out the entertainment, especially the cheesy wanna be Frank Sinatra impersonators.

The Food Ho said…
Ha...the shirt is one of those urban outfitter fake vintage ones. It's his current favorite shirt. I told him he should have gotten at least 3 so he could rotate.
October 18, 2009 at 3:57 PM