So, Canal Street, and some other streets were closed for the Grambling Southern game. You know, the "soul bowl." That's funny cause I almost typed the "soup bowl". Anyhoo, the hotel advised guests not to take their car out of the garage after 6pm. So we needed a cab to get about 6 people with large appetites 1.5 miles. The Food Pimp and I were discussing which route would be best. We figured go to Esplanade and then get on the interstate to the warehouse district. But then we jumped into one of those van/suv things, and the guy had his own ideas. He was from India. He had been in San Francisco, got laid off, then he moved to Nola. He had been there for 2 years. Quite a character. He got to Canal Street, and there was traffic. He complained about the police. He said how they did not know what they were doing, making traffic worse. And he talked about guns. In India no one had guns. So anyway, he got us there in about 20 minutes. I think it must have cost about $20 too. What a bargain. He gave VD his phone number, and he told her to call him when we were done.

So, Cochon. The FP and I had been looking forward to going back here since we last went. Last time was a great experience. But there was one thing we weren't really taking into account. The FP's family isn't too adventurous, culinarily speaking, or otherwise really, except for certain seedy occassions that are neither here, nor there. Well, they were there, but that's been discussed already. Anyhoo, Cochon. It's all about pig parts, and other animal parts as well. But there's something for everyone. Here is a sample menu.

But I would like to hypothesize that some people get squeamish and loose their appetites when they see things on a menu they don't like. It turns them off of things they might otherwise like, because they are juxtaposed next to things that are "gross". This reminds me of our Irish friend we knew in Bastan. We'll call him yellow corner. When he got really fucked up, he always had yellow spit or phlegm in the corners of his mouth. We also could call him Pirate Bob because he was just unintelligeable when he got that fucked up - partially because of his accent, partially because he would talk gibberish. Even his countrymen and brothers couldn't understand what he was "going on about" when he got that fucked up. Anyway, Pirate Bob Yellowcorner always used to say, "Aye, I hav ta leav tha room if somone's eatin pickles. I hate pickles. Celery too.

So, Cochon. This sample menu has fried alligator (not weird at all), fried rabbit livers (very french rustic), boucherie plate (yum!), paneed pork cheeks (what's gross about that?), hogshead cheese (okay, this can be sketchy - but they make everything from scratch at Cochon. They butcher the meat themselves!) and ham hocks (a very noble and reasonably - priced cut). But I guess it is weird and foreign and scary to some people. But maybe even moreso, not knowing what some of the words mean on a menu, maybe make people feel dumb. I'm fairly smart so I guess I don't understand that. (For those of you not familar with my style of "journalism" that last sentence was meant to be humorous sarcasm.) 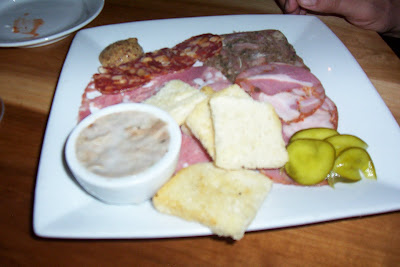 So this is the boucherie plate. This was one of those menu items that made everyone feel confused and maybe not so worldly. I believe I was asked about 4 times what the boucherie plate was. Because someone would ask, then not really listen. Then a few minutes later they would ask again, not realizing that they had already asked. So I said its a charcuterie plate. Which they all understood. So VD ordered one, and the FP and I ordered one. So there was like a pork rillette, salami, and some other bologna type meat, and the hogshead cheese. Also wholegrain mustard and pickles. But we looked on VD's plate, and she had a wedged heirloom tomato. She wasn't really eating it, so we ate most of it. Everything was really good. Fresh, not funky, and just nice flavors. 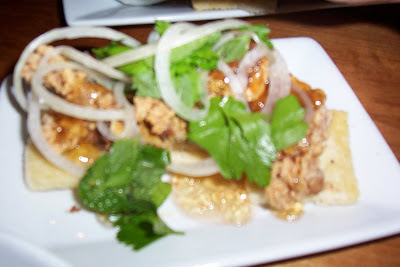 This is a horrible picture of the fried rabbit livers. These I liked. They were livery, but I guess the sweet piquant pepper jelly and the batter coating balanced the minerally taste out. Really yummy. 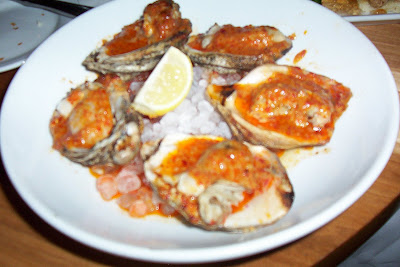 Oyster Roast. Last time we went, people told us we should have gotten the oyster roast. Oysters at a meat restaurant. Well, I suppose the meat at my seafood restaurant is pretty good... So look at the rich peppery oily sauce on the oysters. To some that may not look appetizing. To me, it looked like there were not enough oysters. These were way better than the ones at Acme Oyster House, not surprisingly. 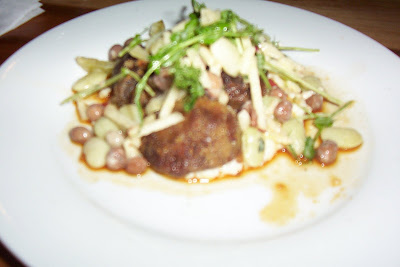 Okay. I don't know the exact description of this one. It's slightly different than the menu online. There were pork cheeks, and I think there was the goat cheese at the bottom. But then there was the lima bean and apple and arugula salad, that really made the dish. The pork cheeks, I daresay, were not as exciting as I thought they would be. Once again, I'm going to give one of those "relative to all the other dishes" speech. Relative to all the other amazing food, the paneed pork cheek was not as shining a star, but it would have held it's own in an objective court of law. So yeah. Great supporting actors, just a kinda weak lead - like Winona Ryder in Girl Interrupted. Man, I feel like I've used that simile before... 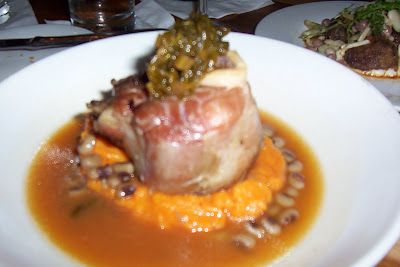 Ham Hocks. Pickled Greens. Sweet Potatoes. Hock Broth. Black Eyed Peas. Okay. This was like one of those dishes where you had to eat all the components to really get the artistry of the dish. Okay, I've probably had a ham hock that I liked better than this one. But man, with the sides it was like a symphony in my mouth. And all the instruments are in harmony. The ham hock was so big and smoky and meaty, like a trombone solo in my mouth (pervert it into your own dirty meaning if you like). But when you tempered it with the honey sweet sweet potatoes and the refreshing black eyed peas and greens - universal peace. My one gripe was that the proportion of meat to sides was too in favor of meat. I actually would have preferred more sides and less meat! 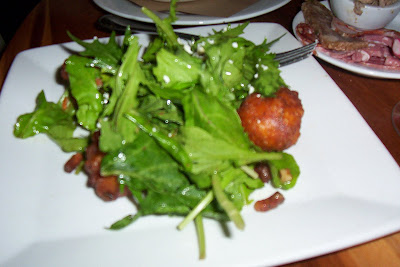 This was the salad that FP's mom got. Arugula and pecans and goat cheese balls, I think. It was good. They all got like a soup and salad. I kinda stopped taking too many pictures of all their food, because I think it made SPR (Sarah Palin Reader - the FP's bro-in-law) uncomfortable. And I didn't want that!

So we finished up, with everyone thoroughly unimpressed, and we called the cabbie. He said he would be there in 5 minutes. And he was. He pulled up, and he let a fare out. They exited the cab and went into Cochon. Coincidence, nah! He was trying to take them to Dooky Chase - a Nola institution of a restaurant, but it was closed. So he obviously convinced them that Cochon was a fine alternative. I hope they liked it more than the family did!

So we went back to the hotel. We had to wait in traffic again. And the roads were closed. So at every road block, either the cabbie or FA - FP's dad - had to approach the policemen and tell them that his wife has a bad hip and can't walk so could they let us through? So they all did! He dropped us off on Decatur 2 blocks from the hotel.

So then everyone else went to their rooms. The FP and I went back towards Esplanade to meet our peeps. First we were at Molly's for a few hours. Then we went to DBA. We got to catch up with old friends. It was a great time. But then by 4 am, I had had enough of stories of Budapesht and not having money but trying to open 2 new businesses and driving a fancy european sportscar. I am writing about no one in particular with that statement. It was just a general thing directed at no one in general. Finally we got to go back to the hotel in style... our buddy drove us back in his pimpin suv with the fancy rims. Sleep. That's what I needed. With all the coughing that VD kept doing - spittle spraying on me, I was sure to get sick.

Ryan Hogrefe said…
Been reading your blog lately. Sounds like you had a good time and ate well.
December 28, 2009 at 5:27 PM

The Food Ho said…
Yes, Kirk, the way to a real man's heart is through his hogshead cheese!

caninecologne said…
hi fh -
i've never had hogshead cheese but i'm willing to try it! man, there are a lot of good places to eat in New Orleans!