Posted by The Food Ho on March 28, 2010
So, we tried grocery shopping last weekend. We don't ever shop for really more than one or two meals at a time. So this time we did. We went to Zion. It's not my favorite place. The parking in the lot in front is always a nightmare. The Food Pimp always bitches about why the empty hair salon has so many spaces that are always empty, and the (pardon my stereotype because it's true) bad asian drivers don't know where they're going or how to back out of an angled space without taking 5 minutes. And then you walk in and it feels like the northpole in there! It's always freezing! Okay, the place is clean and organized and the produce is nicely refrigerated, and the pastries look nice. But it's cold, damnit!

Anyhoo, this is what we ate this week at home: 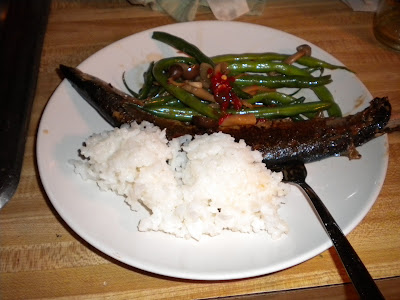 Big pike mackerel with green beans and mushrooms and sushi rice. This was so good. The FP was smart this time. We have practice on Monday nights, and when we are done, we don't have dinner at home so we end up going through a drive thru. This time, he cooked dinner before practice. So all he did was reheat and eat. Our male cat, Stinksy, went crazy. He used to never care too much about people food before. He would be mildly interested in what we were eating, and then when we gave him a little, he wouldn't eat it. But then he would still stare at us hoping for some more. Now, he still doesn't eat everything, but I guess the way we eat, everything looks so delicious to him. So when I put the bones in the garbage, I put them in a plastic bag and tied it. The next morning, the bag was ripped open of course, and the spine was on the rug by the front door. Stinksy must have had a good night. 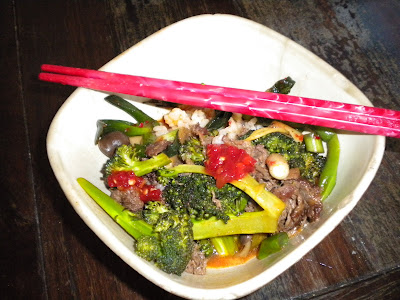 Broccoli, mushroom, beef stir fry with green onions marinated in chili paste. You know, I hear stir fry, and it's like not exciting sounding to me. I guess because it's stir fry. But stir fry always is tasty if it's simple and with fresh vegetables. Sometimes, when it's with frozen mix and has lots of cornstarch sauce, that's when it sucks. Or when there are big raw chunks of veggies. 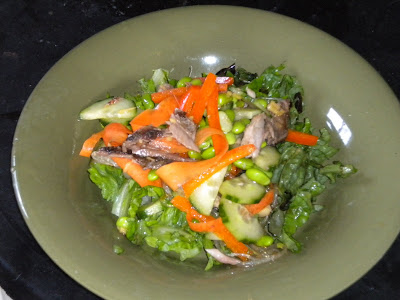 Salad with leftover mackerel, lettuce, shaved carrot, cucumber, and edamame. The dressing was a simple soy, sesame oil, ginger garlic, rice vinegar, lime juice thing. I heated the garlic and ginger, then dumped all the liquids in the pan so it was a warm dressing. Warm dressing is good, cause the food takes the flavor nicely. That sounds stupid, but it's true. I'm not going to preach about warm dressing, because that would be ridiculous. But just ask yourself, when was the last time you had warm dressing on a salad. And ask yourself if you noticed, and you thought, that was really good. Sometimes, dressing doesn't really work as a cold dressing - like bacon vinaigrette or brown butter dressing. Some people don't like warm dressing because it wilts the lettuce, but if it's a little wilted right when you eat it, it doesn't bother me. But why would I preach about warm dressing? As if people who read this blog have time for such nonsense. 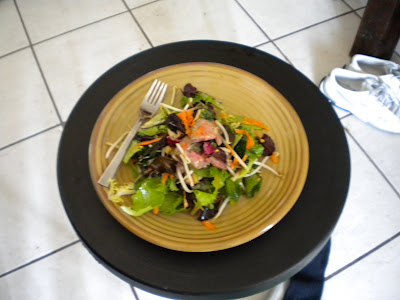 Look like an ordinary salad, right. Sprouts, lettuce, beef. Okay. But it's not. This had cilantro chili vinaigrette on it. Probably the best vinaigrette known to man. This is not our recipe though. It's bigger than me OR the Food Pimp. It's from our friend and former owner of Vega Tapas Cafe. Now I don't remember where she got this recipe from, or if she developed it on her own. But it's delicious. At Vega, it was mainly used for coriander seared tuna, with avocado and tomato relish. But then we had the 3 crouton bread salad with tomato and avocado, then sometimes the crab avocado, tomato and cucumber salad. Man, those were delicious. Makes me crave blue crabs. Anyway, I should post the recipe sometime. But not today. It's my day off, and I don't want to go digging through a bunch of old boxes and irritate my allergies even worse!
cooking eating food salads

caninecologne said…
hi fh - you are so lucky you can cook and so can the fp!

i agree about the shitty parking at zion. there's an extra lot across the street but sometimes that gets crazy too.

caninecologne said…
the noodles are cooked, seasoned, and have everything (meat, veg)

the hot dog thing is sliced up hot dogs on this bread with ketchup already on it. my friend lotus thinks it's disgusting but i love it!
April 1, 2010 at 5:21 PM