Posted by The Food Ho on June 28, 2010
So, Sunday night - Mother's Day - BuffaloRib - my middle sis wanted to take us to dinner, as Openheart - my oldest sis, Duwende - my nephew and I were leaving the next day. It was after 9 when we were finally off to look for a restaurant. After 9 on a Sunday, Mother's Day, is probably not a good time to be searching in Lakeland, Florida for an open restaurant.

We went to the Japanese restaurant/sushi buffet in Southgate. Southgate is that famous shopping center with the 50s style arch that some of the filming of Edward Scissorhands (one of the classic movies of all time) was filmed at. Of course, now that my palate and my stomach are much more discriminating, buffets throw up red flags, red flashing lights, emergency 20 inch thick steel barriers, and guard dogs trained to kill. But we were in Lakeland, and it was late, and this place was clearly open. So we scoped the place out. There was a long buffet line of sushi, with the sushi chefs standing behind the line smiling at us. Behind their old, scary sushi. You know how when sushi sits and it gets all shiny, and then it starts to dry out? That's how it all looked. Dark and shiny and scary. And I remember the hot food having lots of fried stuff.

So, we got back in our respective cars and drove on. Then we found Shingetsu. My sis ran out and asked them if they were still open. The little Japanese lady said, yes, I'll make sushi for you.

So we loaded out and headed in to an empty restaurant - expect for one chatty guy at the bar. We got a sake, and we all had a few thimblesfull. Duwende was running around checking out the place, but luckily, no one was in there. Openheart got a free glass of wine for Mother's Day, she could probably use it. 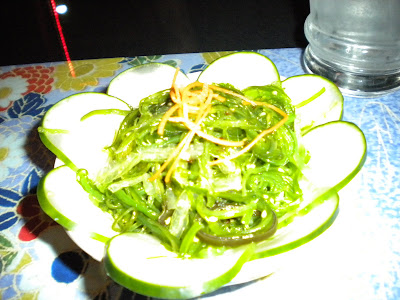 We got seaweed salad. This is almost mandatory for me. Unless it's not hydrated enough like the seaweed salad at Mitsuwa, it's generally always yummy.


Creepy Uncle H - my bro-in-law - got the chicken teriyaki, which came with soup and salad. Here's the salad with the carrot ginger dressing. 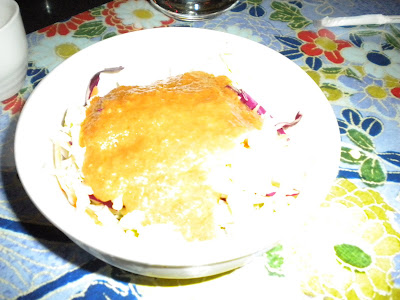 I gotta admit, it wasn't good. It was like the packaged coleslaw mix, with pureed carrot and a little ginger. It wasn't dressing, it was cold baby food. 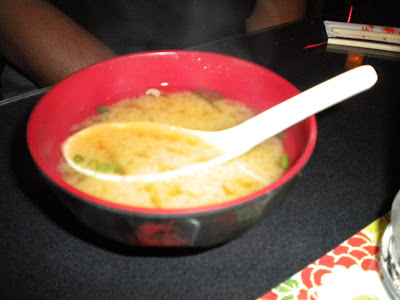 Here's the miso. It was fine. I'm not gonna bash the miso when she was serving us after hours. Miso sits and it gets cloudy like that, but it still tastes fine. 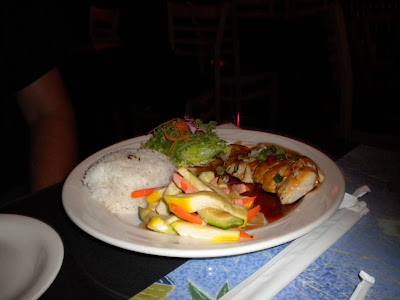 Here was the chicken teriyaki. I don't know if I tasted it, but it seemed edible enough, it was a nice presentation. Teriyaki generally isn't my thing anyway - except for ribs, of course. 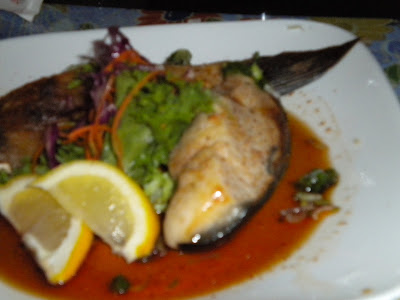 Here was the hamachi kama. It was cooked a little too low, the skin wasn't crispy, but I imagine all the equipment had already been off and it wasn't as easy to cook it properly as if we had ordered it an hour prior. It was still hamachi kama meat, which is yummy flavor unless it's old. 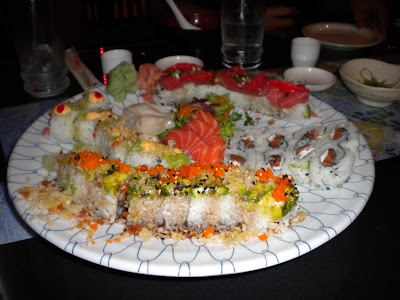 Here was all the sushi. Philadelphia roll, mainly for the Duwende. Caterpillar roll, dragon roll, salmon nigiri, conch, and... Shingetsu roll, or something like that - tuna avocado roll with more tuna on top. The rolls were all nicely rolled, and the rice was nice, and the fish was fresh.

For late on a Sunday, after the hellish 2 weeks we had, this was an amazing dinner. I got to hang out with my sisses, not having to rush eating to go somewhere. I didn't have to worry about my dad, my mom was hopefully going to be moved to a rehab within a week, and I was finally going home the next day to see the Food Pimp and the cats. This was the longest I had ever been away from the Food Pimp since maybe I had moved to Boston. This was our last supper of sorts.
eating food Lakeland sushi