Posted by The Food Ho on June 25, 2010
So, there's this cuban cafe in Munn Park in Lakeland called the Silver Ring Cafe. It's been there since I remember, back when we called Munn Park Bum Park. That's when it was shady and full of bums. But several years ago, they cleaned it up and put kinda trendy little restaurants and stuff there, for the downtown workforce I guess. I'm not sure where people work downtown, because most of the business buildings downtown are empty.

I went once to Silver Ring with my bf, and we were grossed out because they stacked the loaves of cuban bread on the shelves naked. When we went in this last time, they didn't have the naked bread on those shelves... times have changed, but the menu hasn't. We decided we were going to the park to let the Duwende burn off all that energy he always has - right before he gets tired and cranky. So we got cubans to go - sandwiches, that is.

So, when we ordered, they asked, do you want everything on your cuban. And my response was, sure. But when we got to the park and I opened it up, I thought, why the hell is there mayo, lettuce and tomato on my CUBAN? It was "dressed" like a po boy!!!!! 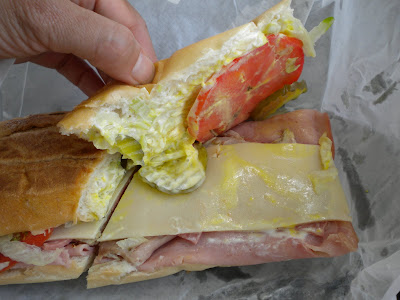 And when I say dressed - it was like a special occasion, like prom or something! There was just an inordinate amount of mayo. Anyway. Cuban - roast pork, ham, swiss, lots of pickles and mustard. That's all. There were like 2 pickles on it. I think without being dressed, it would have been a good sandwich.

The crab croquette things, on the other hand, were gross. 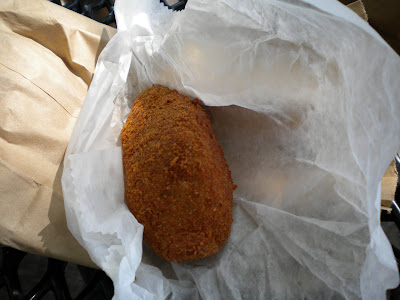 Okay, so getting big fried crab balls to eat at the park on a hot day was probably not a wise choice, but I was just trying to sample the cuisine of the city as much as possible. These were crabby in a bad way. Like, pasteurized canned crab way, or almost spoiled - those are kinda similar tastes. Anyway, we watched the Duwende interact with the other kids. This adorable kid a few years older - he looked to be a halfsie - took the Duwende under his wing for a while. He would grab him to go play on this slide or this play structure or that one with his siblings. But then, they went to the swings. They were swinging together. But then, the Duwende got off and stood behind the bigger kid, and of course got knocked frontward, and then on the downswing as well. Then that was that. That's one of life's lessons that I guess every child must experience first hand to understand.
cuban sandwich eating food Lakeland silver ring cafe