But, we've had some yummy food at home. 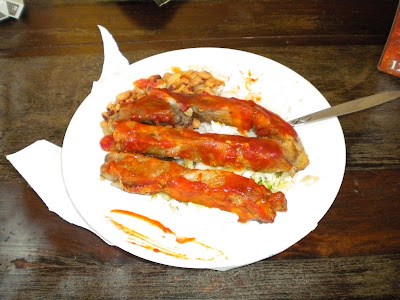 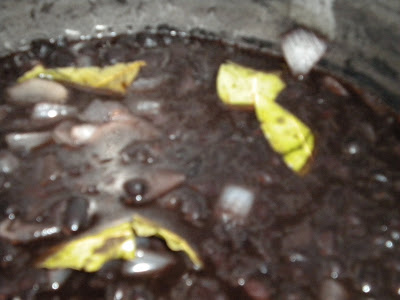 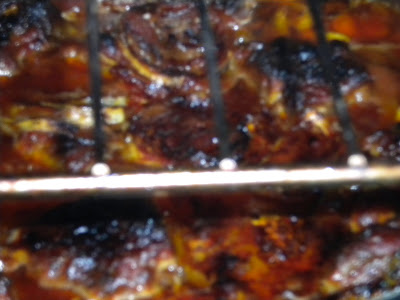 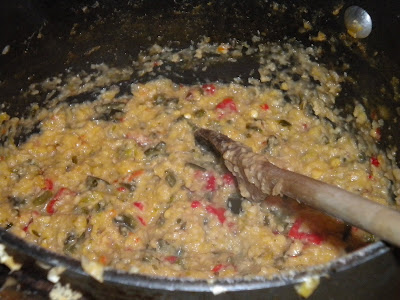 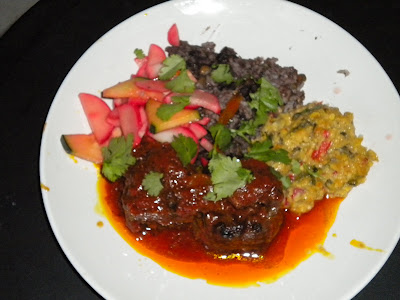 Put them all together - the Food Pimp turned the black beans and rice into Christians and Moors - really moors and christians, because the moors got in there and colored the christians - just like the christians were always scared of. Then I made a pickled radish and cucumber salad, with the corn pudding and oxtail... that was a delicious meal. 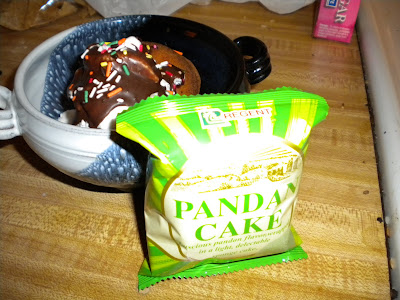 Pandan Sponge Cake Sundae. Pandan is this tropical "screwpine" used to flavor mainly desserts. So, I was on this kick for a while - like every night - and I ate a sundae with a sponge cake, ice cream, magic shell and yes, colored jimmies. Okay, I didn't buy the colored jimmies - you may know them as rainbow sprinkles - the FP had them leftover from an ice cream social that he did a few months ago. And so, they've been there in the kitchen. So, yes, I do sprinkle them on my ice cream. They add texture to it, but not much flavor really. And they're colorful. So for those 8 minutes when I'm eating my ice cream, it makes me happy. But it doesn't last.

I feel like I should end this blog entry with something uplifting or funny. Did I tell you about my LJS experience? No? So a few weeks ago the FP went to his parents' place in Punxsutawney, PA, home of the groundhog, for his mom's retirement party. So, while he was gone, every meal was a monumental decision for me. One day I slept in. I woke up hungry, and I didn't know what I wanted, since it was a Sunday, and prime lunchtime. So, I decided on Long John Silver's. I haven't had it in ages, and I was craving fried something. So, I went there. There were about 4 people ahead of me. I was perusing the menu board, when I realized that the clams were taken off the menu. I didn't know why, but I figured I would get the fish and shrimp combo. So I waited. I realized that that cash register wasn't working. So the counterlady was writing down the order on a napkin with a purple pen, then scuffling over to the cash register by the drive thru window, ringing the order in, getting a total, going back to the counter and telling the customer how much it was, taking the form of payment, going back to the register, ringing it in, then going back to give the change or get a signature, and so on. They seemed to be short staffed. After I ordered, the line grew and grew, but service did not speed up. I noticed that the condiment station was empty. There was just a counter with the empty rectangles where the ketchup pump and napkin holders were supposed to be. The place was dirty. I'm not sure what happened to the place, but it was as if they just opened in a hurry after being shut down. I waited. And waited. Everyone else had gotten chicken, because it was one of those KFC/LJS restaurants. Finally, this man who was a pain in the ass when he ordered, who ordered after me, got his big bucket of chicken. So the lady in front of me asked for her order. For whatever reason, they had skipped over her and me. So she got her order and a free chocolate cake. So then I asked about my order. These guys who were several orders after me had already eaten their chicken and were back at the counter asking for napkins. How could someone eat a whole fried chicken meal without napkins on hand? Finally, I got my order. I headed home. I laid out my spread. And it sucked. By that time, the shrimp, fries and hushpuppies were soft. The fish was still crunchy, but it was kind of old and a bit strong tasting. But, I had my malt vinegar and hot sauce. I ate what I could of the meal, hating myself. I knew that the only cardinal rule of eating Long John Silver's was that I needed to go before 11:30 am. It's pretty much shit after then. So, maybe that wasn't funny to you. But it's better than me going on about how my mom is still dead and how I'm still sad. I'll try to be funny for the next blog. Hope I'm not disappointing all of my millions of fans out there in foodblogland!

Oh, here's something funny. The sign in the bathroom at Marukai Living. 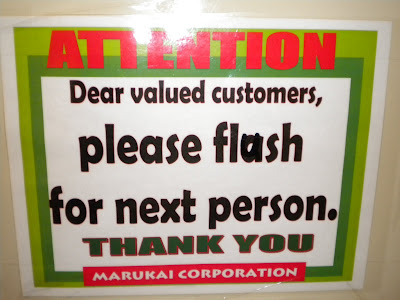 Desiree said…
Me and gee will hang out witchoo people. lets cook something together!
August 16, 2010 at 9:34 PM

The Food Ho said…
Desiree - we'd love to, but we never have a day off together anymoe... we'll let you know if we do!

Kirk - I think your rut is a little different than mine! I can imagine though, after returning from China how you would be in a food rut.
August 17, 2010 at 9:50 AM