Posted by The Food Ho on September 27, 2010
So, the next day, we decided to go to the Mariscos German truck in the Gala parking lot on Fern in South Park. 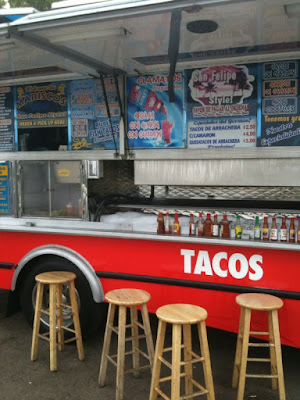 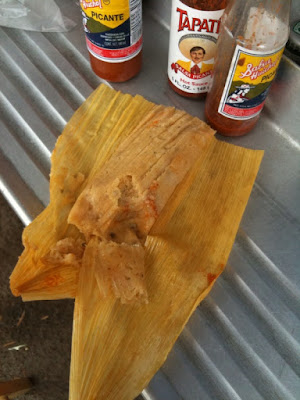 While we were waiting for our order, we got some tamales from the lady leaning against the facade of Gala. She wanted to sell us 5 for $4, so I asked her for 2 and gave her $3. These were pretty good. But I hate to say, it's hard for anyone's tamales to really get me going since I've tasted El Salvadoreno's tamales. They're just very different from mexican tamales. They are light and fluffy - a savory cloud of yummy goodness. 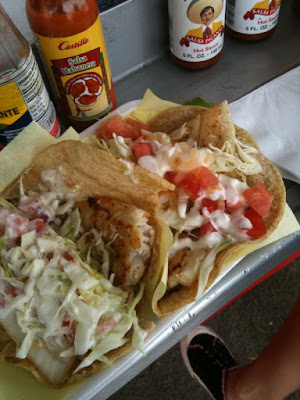 So we got 2 fish tacos with garlic. This will sound ridiculous, but there was too much fish in it!!! For the size of the tortilla, I couldn't eat all the fish. I like the flavor of the accoutrements and the fish together, bite for bite. For most people this would be a score, but leave it to the Food Ho to criticize a bonus! 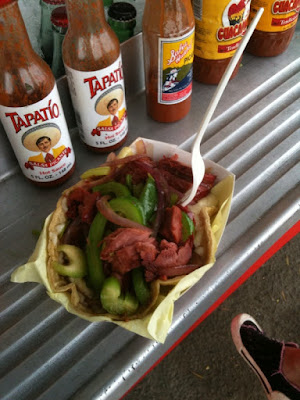 Of course we got the smoked marlin taco. We ordered 2, but only paid for and received one... which was fine. It was an openfaced taco because there was so much stuff in it. It must have been at least 6 oz of marlin steak. It was beautifully smoked. But what is up with the other stuff? It's like they threw some odds and ends into the taco! So, on the bottom of the tortilla, there was melty cheese. Not sure why, the Food Pimp hated it. I tried to rationalize it, like, oh, it keeps the tortilla intact and it doesn't disintegrate. Then there was the big marlin steak. Slightly broken up, but a big hunk of meat. But then, there were quarter moons of celery... and big huge slices of green bell pepper, like a whole bell pepper was in the taco haphazardly chopped into 5 pieces. And some grilled onions - the only thing on the taco that made sense. Oh, don't get me wrong. We ate the thing. We ate all the fish, some of the tortilla, the onions, we kinda picked around the celery and bell peppers. Anyway, we were pretty full for 3 tacos - relatively speaking.

So, we didn't do any of those normal Labor Day things - no picnic, bbq, beach, park. We... pretty much relaxed in the apartment, until we went to eat 4 or 5 hours later. This time we went south to Aqui Es Texcoco in Chula Vista. It was pretty packed. All but about 3 tables were occupado. So we sat in the back - like the minorities we were - and we drooled over the menu. How had we not been here before? I don't know. But I discovered it perusing the internet reference known as Mmm Yoso!!! Of course!

So, we didn't get the cabeza this time - we had to leave something to look forward to. We simply got the mixiotes and nopales salad. 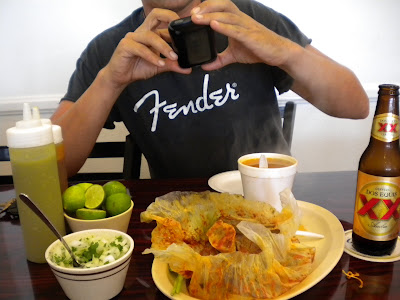 So, yeah. That's me taking a picture of the FP taking a picture of the food. Now that the FP has his iphone, we're like food paparazzi when we go out to eat. Of course that is way more common these days, no one ever looks at us weirdly anymore like they used to. The FP posts his pics on facebook immediately - me, I have a week to two month lagtime. I'm just oldschool like that ya'heard? One time someone told the FP that he should write a food blog. Really. This guy. No clue. The FP doesn't write food blogs, he stars in them. Pshaw. We basically share a brain, so it would be the same blog. Yeah, I was pretty insulted. Here I've been writing my humble little blog all this time, and I know I invited this guy to be a fan of it, and he didn't even bother to take notice of if all this time. But that's how it is. Kinda like sometimes, I tell a joke,and no one hears or pays attention. Then the FP tells the same joke and everyone pisses their pants. Yeah. That's how it is.

Getting back to the real star of the blog, the food!
So this was really just two hunks of meat, rather than a couple small shavings of different parts of the lamb. I'm not complaining. Because the leg and the rib are very choice parts of the lamb. This was rich and spicy and really saucey - you can see the red grease. Yum. Best barbacoa I've ever had in my short life in San Diego! Oh, and the lamb broth! It was spectacular. Best drippings ever!!! I mean, when I tasted it, I figured I could have a cup of that shit every day of my life for breakfast! Really. No kidding. If anyone wants to challenge me and make that somehow happen, I'm up for it. We told the waiter how delicious it was, and he brought us another cup. I'm not sure if he charged for it or not - but either way, we were happy! And he was very pleasant. I left a nice tip,contrary to that female stereotype of jewing down the tip! Yes, I did incorporate 2 negative stereotypes in one sentence! 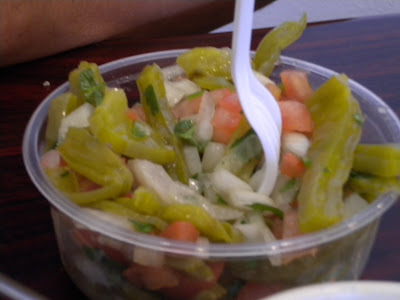 Anyway, now that I've ranted and raved, here's the nopales salad. Now, this was like made with fresh cactus, possibly? So, I didn't like it as much as the pickled cactus. I love all things pickled, and this fresh cactus was not as yummy. Of course it always needs more salt, nopales salad, but this one didn't have the vinegar I come to expect.

Anyway, I'm going to jump the gun and give them \/\/\/\/ 8 chopsticks. The great thing about it, is that I know as soon as the FP reads this blog, he's going to be thinking about barbacoa all week - so hopefully we will return to Aqui Es Texcoco this weekend!!!