Posted by The Food Ho on March 18, 2011
So, we went a couple weeks ago on a much needed break. So needed, that it wasn't long enough. It wasn't very restful either, as there was a lot of driving. But we got to see a part of the country we've never seen before. Arizona. Not our usual urban vacation we would normally plan, but as socal residents, we are more outdoorsy. If you know us, you may laugh, but compared to our selves from 10 years ago, we are like granola eating tree people now!

So, Mother Nature apparently thought it would be funny to conjure up a snowstorm the day before we left. I-8 was closed until just hours before we left, and even then, the road would have been even more treacherous if we had not been tailing the salt truck. 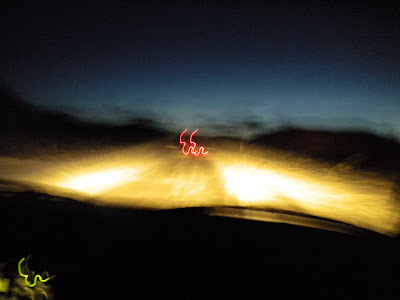 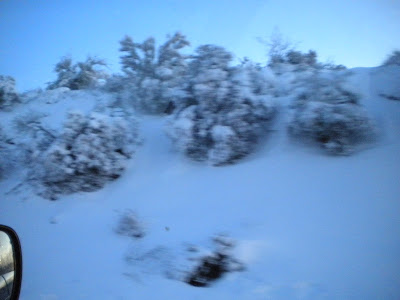 But we stopped at the Golden Acorn hours later, and then came the sunrise and clearer roads. We stopped at the IHOP in El Centro. For ourselves, we were conservatively dressed, but all the locals still stared at us like we were from another planet.

Believe me, IHOP was not our first choice, but it was the first open restaurant. I got bacon (undercooked) eggs over easy (very nicely cooked) and pancakes. Pancakes were pretty damn good. The flavored syrups were disappointing. They tasted more like fruity syrup you would put on a snowcone, not a pancake.

The Food Pimp got some smoked sausage combo that also came with pancakes. The server set them on his side, and he had that silly surprised look - like why the hell did I get pancakes. But he ate almost half of them - with plain "maple" syrup of course. 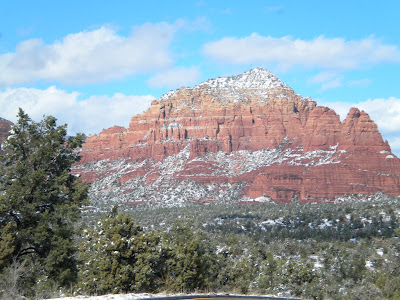 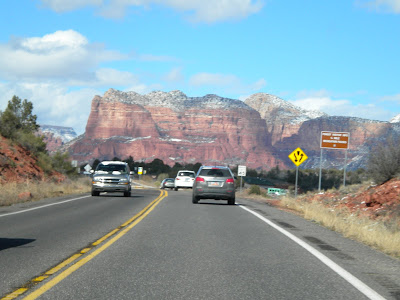 So, we drove through the main part of town. And we passed all the hotels that I had looked up online. We passed all of them. The Food Pimp had to mention how that Best Western looked like a good place to stay. I had looked it up and decided against it. And we went 8 1/2 snowy miles past town on a two lane winding road. It was so scenic that the FP was not paying attention at all to the road, and I thought we were going to drive off the road.

So we got to the resort. No signal. We checked in. They asked if we wanted our landline activated. I said no. They told us that the restaurant was closed for the night and the next morning. Go figure. Wherever we stay, this happens quite frequently.

But that was okay. It was early, we were tired yet exhilerated. We would drive the 8 1/2 miles back for dinner then drive back to our secluded timeshare rental.

I have to admit, it was so quiet and cold and snowy, and creepy. The Food Pimp kept making references to the Shining and stuff. But I have this unreasonable fear of the supernatural, that in those situations I can't make light of it, because I truly feel like ghost will come out to fuck with us. Don't ask me why. Too many inappropriate horror movies when I was too young. Too many lone nights using the "spirit board" by myself in the dark. I wouldn't touch one of those things if you asked me to today.

So, we drove into town, and ate at the "Best Mexican Restaurant in Sedona". I don't think that was too tall an order because I don't think there were that many Mexican restaurants there. 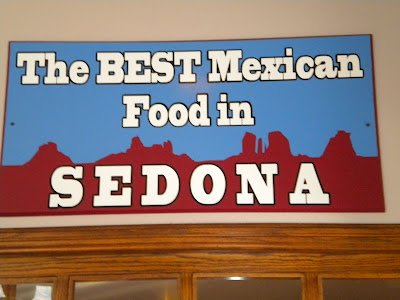 We had actually tried to eat at this little BBQ place behind these scary statues, but this lady was cleaning the place up, and she told us that they were closed because the cook didn't show up for work!

Interestingly enough, the mexican restaurant was attached to another hotel that I was very close to booking. I didn't though.

So we walked in, and we were seated at the window! This was funny, because usually, you sit a party in the window seats to catch the eye of the pedestrians walking by, so you want them attractive, if possible. Maybe all the other customers just didn't want to sit in the window, but either way there we were. And we watched a lot of people stop and look at the menu. Most of them didn't come in though!

We got some local beer, some local name like Grand Canyon or something. Nothing really going on much with the beer, but very drinkable. 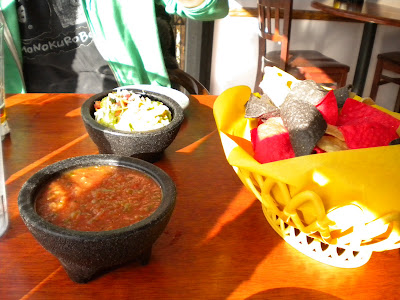 So, we got some chips, salsa and guacamole. There was this big debate between nachos and wings and some other bar food, but the chips and salsa won.

They were delicious, actually. Everything was properly seasoned, and freshly made, and the guacamole was very tasty. 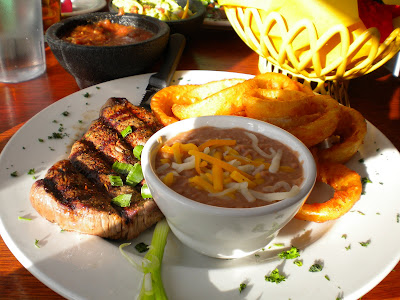 I got something like a sirloin steak. It was...not great. But my refried beans were delicious! And I got onion rings too, they were okay. 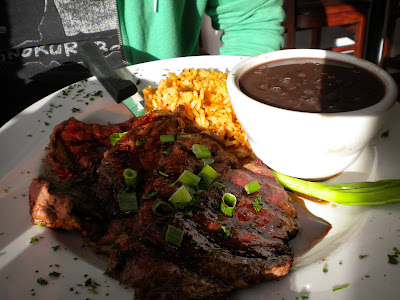 The FP, however had a fabulous dinner. He got skirt steak and black beans and rice. Everything was wonderfully seasoned, and the steak was meaty and spicy and flavorful.

Anyway, the grounds of the resort we stayed at were beautiful. The creek ran right behind it, we went for a crunchy snow covered walk in the woods. We were gone maybe 15 minutes and we started getting creeped out, so we turned back. 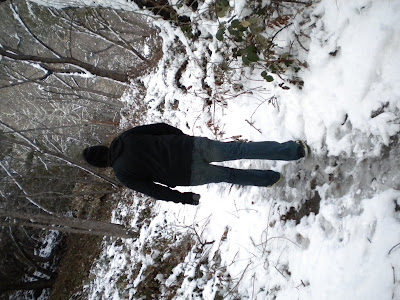 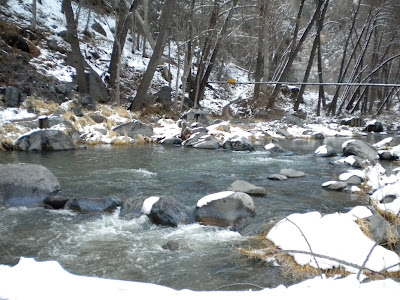 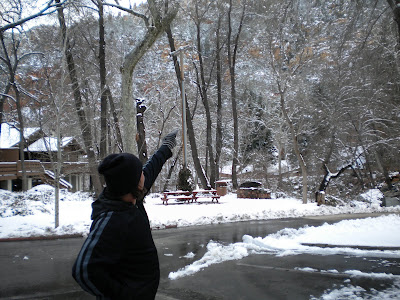 We had some drinks, lit a fire, read the guestbook. It was cozy and relaxing. Then we stoked the fire, lit a fire in the bedroom, and watched all the fox cartoon lineup. Nice.
eating food sedona

caninecologne said…
hi fh - what a cool road trip! those photos of the red rocks with snow are amazing.

none of that red rum stuff in the hotel, huh? or wierd twins and dead people in the bathtub? man, i can't believe my parents allowed me to read "the shining" when i was in 5th grade!!!! they also let me listen to whatever music i wanted to! and look at me, i turned out all right! ha ha.

but back to your post - can't wait to hear more. that is a long@$$ time to be driving too.

so re: clothing - what were the locals dressed like at the ihop that they thought you guys were from another planet? just curious.
word ver:
filiti
March 28, 2011 at 9:51 PM

The Food Ho said…
CC - The locals were dressed, like locals. Plaid flannels, older, conservative people...we were a little messy having been in the car for several hours to only get 100 miles. We probably looked like we were from San Diego and we decided to drive through the mountains to see snow!
March 30, 2011 at 10:59 AM

Unknown said…
I've been reading through these archives for the past 2 days. I've always been a fan of your writing. Maybe stems from the dark days of 'the notebook.' i think I told you my in-laws live in Sedona. I love that you found it creepy in parts. We go there at least once a year, but maybe they've sheltered us from the spookiness. I'll look out for it next time I'm there.
May 5, 2011 at 11:51 AM