Posted by The Food Ho on April 26, 2011
So, I had to go to the malls 3 or 4 times a couple weeks ago. I never go to the mall, I avoid it if at all possible. In fact I will drive farther to avoid Mission Valley. Just the traffic, the parking, the walking around looking for a store...this is all a nightmare to me. When I was younger and in college I would have loved going to these open air malls, wasting time, shopping, window shopping, not so much now.
So, 2 weeks ago, I went to the Fashion Valley Mall - one of the worst malls to just pick something up. So this is where I got our beloved macbook pro. The place was loud and buzzing with activity like a cafeteria. There were about 2 employees working for every 3 customers. I upgraded the memory, so I had to wait until it was ready. So, it was lunchtime. I wasn't hungry because I get jittery when making big purchases, as I always wonder how we can afford it - which we really couldn't, I would find out a few days later.
Anyhoo, I knew I had to eat lunch because it was lunchtime. So I went to the food court. There was japanese, mexican, sandwiches, and a greek place. So, I figured I would get a gyro plate. It was okay. 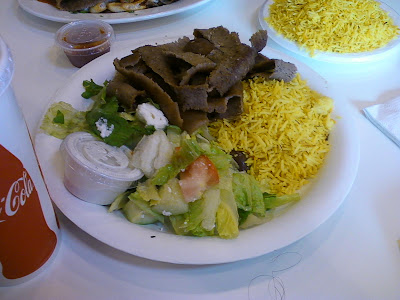 Oh, they had other sides, that after I ordered I wished I had gotten, but that left other items to get later. So, the gyro meat was delish. The saffron rice tasted like saffron. The salad was fresh and tasty, and the tatziki was really nice. I loved it.
And then I tasted the FP's dish. The iskender kebab. 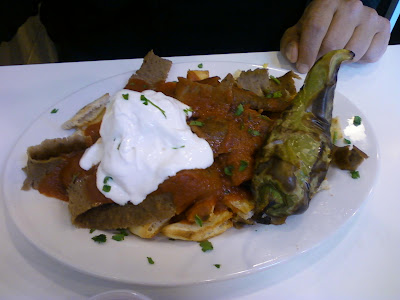 So, it was gyro meat over warm pita squares, with brown butter, a tomato sauce, and lebneh kind of on the side. And a roasted chile. It was wonderful. Tomato and yogurt together on the lamb and the pita. Just so...comforting.
So, at the end of the week, the Kebab Shop won, hands down. I can't wait to go back there!
The Kebab Shop
630 9th Avenue, downtown San Diego, 92101
eating food food courts gyros middle eastern cuisine