Posted by The Food Ho on April 04, 2011
So, day three of our SW adventure. We woke up, packed, and went back to the Grand Canyon. This time, we drove to the cliff and parked right on the side of the road and walked a bit. There was barely anyone around, which was nice. The view in the morning was even better! 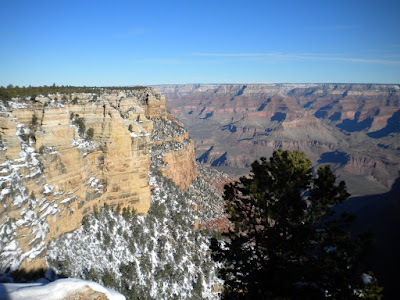 We walked by some Vietnam vet taking pictures with a fancy camera on a tripod, and he started talking to us. He's a photographer now. Doesn't everyone take pictures of the Grand Canyon? Doesn't seem lucrative. Anyway, we excused ourselves and kept walking. We saw two pairs of flip flops on the edge of a cliff. Creepy. But, they probably planned it to look like a double suicide for people to wonder, right? 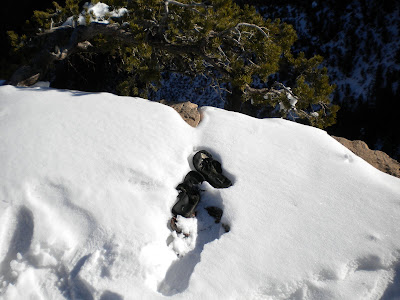 We took a few more pictures, then we headed back to the car and headed for Vegas. We had our google maps route, but we kept seeing signs for Route 66. We felt like we should go on it for a while... it's Route 66 after all. So we did. It doesn't seem to be kept up very much. There were those touristy general stores and gift shops at the exit when we first got on Route 66. We thought about stopping, but there was like a tour bus of Japanese tourists that had just stopped, so the place was mobbed. Curiously enough, there were also two girls who were Amish or Quaker.

So, the drive was desolate. 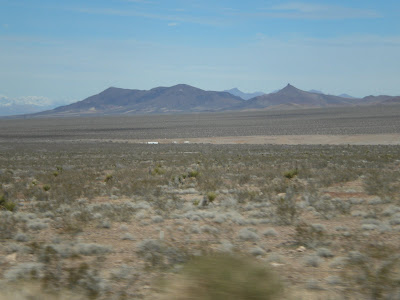 No wireless signal, of course, except for when passing some sparsley populated towns. So desolate. Who would live in these places? What was life like for these people? What did they eat?

We were getting hungry, so judging by the map, there was Peach Springs coming up. Judging by the size of the dot, it must have been big, so we thought we would stop there for a bite. Hopefully, some local place - not just chain restaurants. So, we drove and drove, hungry, and then we got to Peach Springs. Not only did we keep driving, we sped up. It was a sad rundown place. Not one gas station, not one store, just sad falling apart old houses, with lots of junk in the yard, and old cars. The Food Pimp's explanation was that these people were moving out west to Cali so many years ago, and these old cars of theirs just died, so they settled there in Peach Springs when their cars wouldn't go any farther. So from what I can see on the internets, is that the FP's theory isn't true. Peach Springs is the capital of the Hulapai Tribe. Some friar named it St. Basil's Wells, Then some lieutenant rode his camel through, then the mormons stopped by, sowing peach trees. Is this the edenlike place the Presidents of the United States of America sing about in their 1990s hit single?

Well, maybe when you get off the main road, Peach Springs is just beautiful. And who am I to judge, these people probably keep a cleaner house inside than I do.

So anyway, we got to our junction when turn off towards Vegas. And there were a bunch of chain restaurants! Yay for chain restaurants! If I had been a kid, I would be satisfied on this trip with the restaurant offerings along the way. So, anyway, we picked the elusive Arby's. It was lunchtime, so it was pretty busy. But I have to say, it was still good. Some of my fellow food bloggers might be appalled by several of my preferences for fast food joints. But I like Arby's! If you send me an Arby's Tshirt, I will gladly wear it!

So yeah, I got the medium sized beef and cheddar, and I substituted potato cakes. I like the sweet Arby's sauce and the Horsey Sauce. I don't really care for that crazy new Three Pepper sauce. What I like to do is put a generous amount of Arby's sauce and Horsey sauce in my sandwich, then I dip each bite in some more Arby's sauce. I know - corn syrupy badness! But I do have to admit, part of my pension for Arby's has to do with the childhood memories. Arby's was often an event - usually after Sunday mass. The one we went to in Lakeland was this oldtimey looking one with not much seating, but they were the swivel chairs which I really liked. And sometimes I could get a shake.

So, after a satisfying lunch, we headed on in to Nevada. We stopped at the Hoover Dam and walked across the newly built Pat Tillman lookout bridge. It was pretty dam cool. 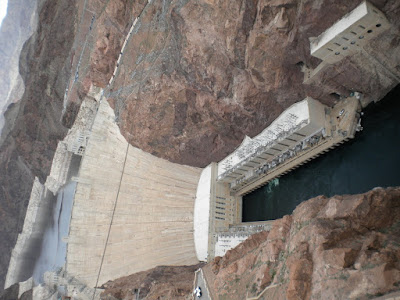 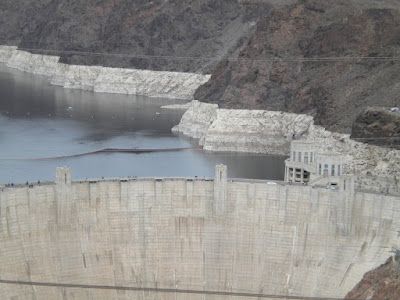 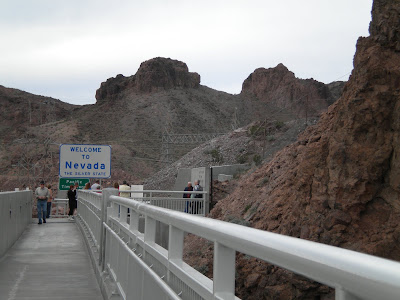 We stopped at a gas station and marvelled at the slot machines. And we almost felt like we were in Las Vegas all too soon - we had been driving through Arizona for so long, that we had been ready to experience another state.

But, alas, in no time, we were in Vegas. It was a little overwhelming, coming from the pristine middle of nowhere with beautiful desolate landscapes. If I had to plan the trip again, I would have reversed the order of our stops, and ended in Sedona. Anyway, off we went to the Rio, to meet the FP's sister. Coincidentally, they had been in town since Sunday for a convention. Her husband can be high stakes gambler, so he had earned lots of points for free hotel rooms, so they put us up in the Rio for their last night in town, so we could hang out. 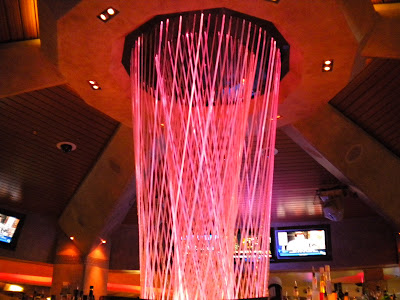 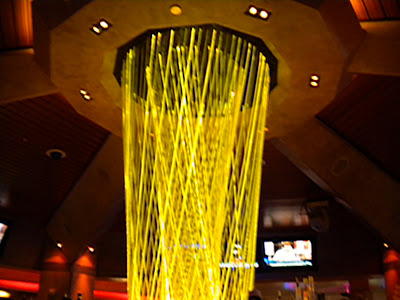 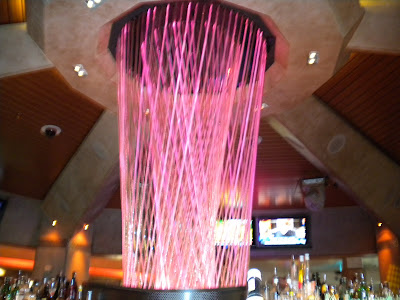 We met at the bar by the main entrance and had some drinks. Then we checked in, and we all went up to look at our room. They were curious, because they paid extra for their suite with a view of the Strip. But, the whole building has floor to ceiling windows, so every room has a view of something. How I do not have pictures of our view, I do not know. Not that my little coolpix could have captured the view. We could see the backside of that new hotel - the Cosmopolitan, and the Rio sign. It wasn't spectacular compared to other views, I'm sure, but the FP's sister and brother in law were a little unhappy that we still had a view when they had paid $20 extra for theirs.

So we took showers, we enjoyed the room for a few minutes, then we met in their suite. We took a cab to Bellagio to eat at Mon Ami Gabi. Which happened to be a place that everyone had eaten at except for me! It was a French bistro place. We got a bottle of wine, and chicken liver pate. 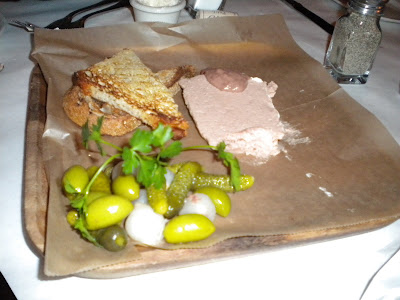 The pate was really good! And I love cornichons and olives and pickled onions. (In New Orleans we used to get a jar of pickled onions with each bottle of Kettle One at one restaurant I worked at. They didn't put them in drinks, so we would just eat them all.) We nibbled at it. The last smudge sat on the plate for a while, until... I think the FP disposed of it. 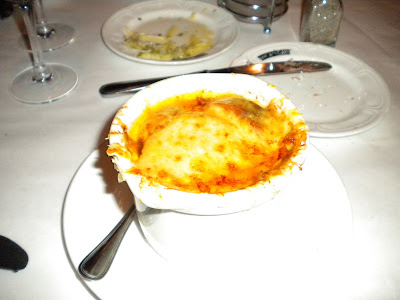 The FP got the french onion soup, his sister got a salad of frisee and goat cheese? and bacon? - I honestly don't remember. 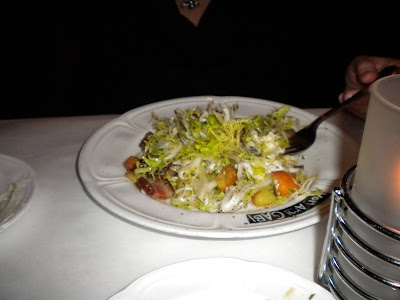 We have the kind of relationship where I already feel intrusive by taking pictures of her food, so I don't feel comfortable asking her for a bite of her food if it's not something really exciting that I need to taste. The french onion soup was good, but not to die for.

I didn't get an appetizer, even though I was pretty hungry because I figured the portions would be big and I wouldn't finish and that a lot would be wasted and I'd be walking around Vegas all bloated Which that is all what happened. I got the half roast chicken. Half a chicken. 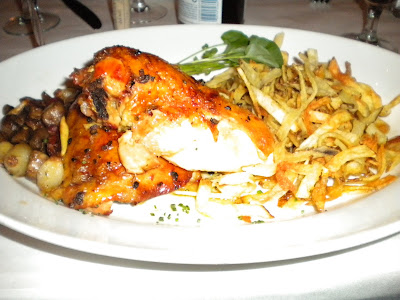 This is not what I would usually order, but I was very steaked out, and I thought that a nice french restaurant would have a nice roasted chicken. And it was nice. Flavorful and juicy and yummy skin. The frites sucked. They were cut with some kind of flat wide die - like short fettucini - and so they were too crispy and not starchy fluffy middle! But, the star of the plate was the roasted mushroom, pearl onion and bacon side! That is a big part of why I was attracted to the dish. Its was bacon greasy goodness! 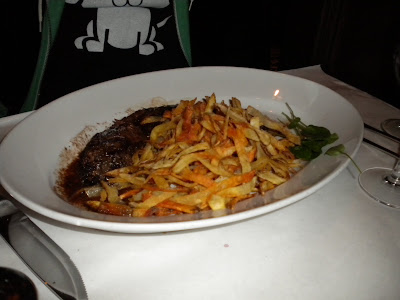 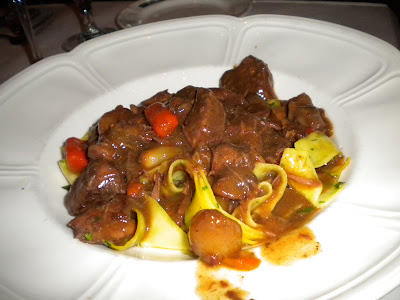 The FP's sister got Boeuf Bourgignon which came over pasta. It was...average. Not blow your socks off, like Julia's recipe as seen prepared in "Julie & Julia" by Julia's editor and by Julie the second time. 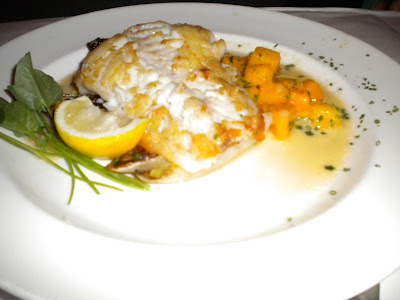 The FP's brother in law got the fish. I can't remember what kind, not halibut, but something halibutty. He isn't the most adventurous eater, but he's come a long way over the years. The FP's likes to cook out of pretty cookbooks like Barefoot Contessa, so he's probably had to eat a lot of vegetables and things that he wouldn't normally eat. Anyway, the fish special had like roasted butternut squash, and he couldn't fathom the description. As depicted in my professional photography, his fish wasn't the nicest seared fish I've ever seen. When asked how he liked his dish, his response, was, it didn't come with mashed potatoes. Who was I to tell him he could have ordered a side of mashed? It was as if he were born and raised in San Diego, as San Diegans are obsessed with mashed potatoes!

So after an average to delicious meal, we walked around the Bellagio. And walked. The FP's brother in law was smart enough to take us to the back area where they redo the plaza with different themes. Since it was chinese new year, the area was decked out in chinese rabbit themes. 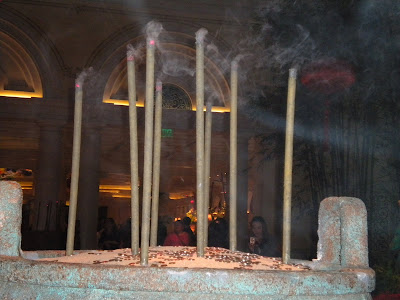 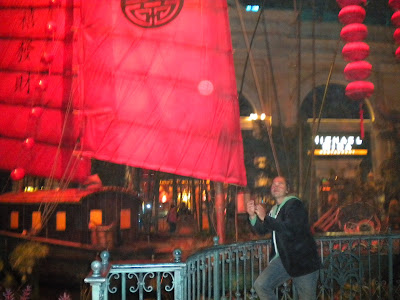 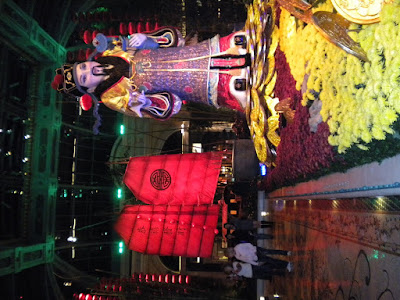 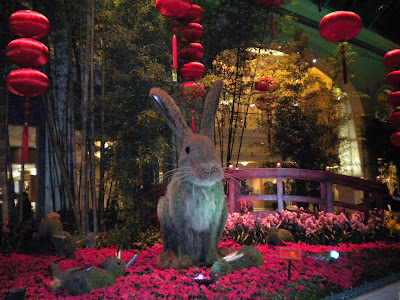 Very very cool. And there was a big boat! Loved it! So, after walking around casinos and watching the in laws gamble, we headed back to the lounge at Rio, had a drink or two, played on the interactive touchscreen table which was like a giant ipad, then we called it a night - at like 11:30 pm.