Posted by The Food Ho on May 17, 2011
So, last Saturday, we went to the Golden Hill Farmers Market. It's a couple blocks away. We wanted to eat lunch, but the only problem was that the big boy, The Food Pimp's dad was coming down from Irvine to take us to lunch. So, of course, we decided to just get one plate of food, as an appetizer.

So, we ate at the mediterranean/middle eastern tent. The very nice couple who run that stall remembered us, even though we didn't eat their food the Saturday before. So, we couldn't decide on the beef kebab or chicken, so they suggested we get one plate with a piece of each on it! It's great when indecisiveness can be solved without compromise! 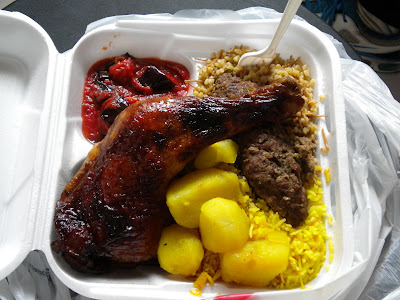 So, it was similar to the plate we got 2 weeks before. The marinated chicken and beef kebab. Saffron rice and potatoes. Although the potatoes weren't yogurty this time. There was a wheatberry side that was so good, and then this tomato eggplant thing. We discussed how it just looked like eggplant cooked in tomato paste, but it was way better than just that! It was just really eggplanty and tomatoey goodness. So, we pretty much gobbled up the whole plate of food.

Then we waited around for the parental to make it down here. He is funny because he is so predictable. He called a little before he was to get here, asking "what exit is it, honey?" He was talking to the FP, during this call, 3 things wrong with this need to be pointed out. First - he was talking on his cellphone while driving. He is not the best driver to begin with, and it's illegal to talk on the phone and drive! Second - he has been here plenty of times that he should know the exit. He does take loads of prescription drugs though, and I think his mind is like grey oatmeal at this point. Third - he calls the FP honey. The FP is his 39 year old son, so this is weird, very weird. As weird as the FP's sister calling him sexy, but that's another story.

Anyhoo, the FP's dad got here, and I was in the shower. The FP was also in the bathroom doing his hair. He heard his dad walk in, so he opened the bathroom door and told him to come in (to the apartment). So, at this point, the FP either didn't think to close the bathroom door, or made a lame attempt to close it and didn't. Anyway, the door was open. I was showering. I yelled at the FP to close the door, and after what seemed like too many seconds, he closed it. Not to mention, I hate the warm air escaping and cold air coming into the bathroom when I take showers. So, anyway, the FP finished doing his hair and I finished my shower.

So, we wanted steak, but the FP had to ask his dad where he wanted to go. The FP had earlier complained about how he always went to the Fish Market with his dad. So, the FP asks, what do you want, like steak or something, or seafood. The reply, "I don't want steak, it's too heavy, so let's have seafood." So the FP replies, "You want to just go to the Fish Market then? I know we always go, but it's good." So that's where we went.

We walked in, and decided to sit at the food bar, like we always do. It was the younger Mexican guy who was working. We had been served by him before, and he was good. So, we sat. He acknowledged us, gave us menus and napkins and said he would be with us in a little while. He served the other 2 groups at the bar, and then, it was like he forgot about us. The FP's dad started to freak out asking why we weren't getting served. So, the FP asked him if he was in a hurry. He said no. The FP said, well let's just enjoy it, it's a nice day, and all.

So, it really did take a while for him to take our drink orders. I ordered a Stone Pale Ale and a water. I got a Stone. No water. This is the bain of my existence. No one will just get me a water the first time I ask. Remember when water was not such a precious resource, and every place automatically gave you a water without you asking? Gone are those days! Water is scarce, and so is hearing when it comes to my orders for water. I mean, I know I have a weird voice, and I guess it sometimes is hard to understand me when I don't talk loud enough. But honestly, because you don't ring in a water or charge money for it, it is the one thing that is easily forgotten. Some people started sitting at the bar, so the cook was getting busy. So, I didn't get a chance to ask for water again until our food came.

So, first course. Oysters. The FP ordered the sampler. 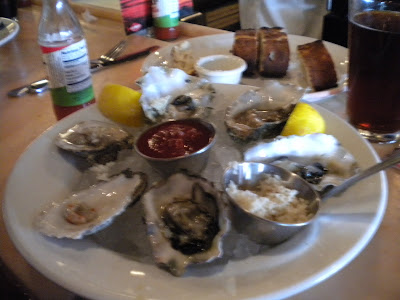 So, there were 2 fanny bay, 2 blue point, and 2 of the other kind. The menu says grassy bar, but I'm not sure if that's what it was that day. Anyway, they were all good. Clean tasting and sweet.

Then we wanted to get something healthy, so we got the wedge salad. All salads are healthy right? 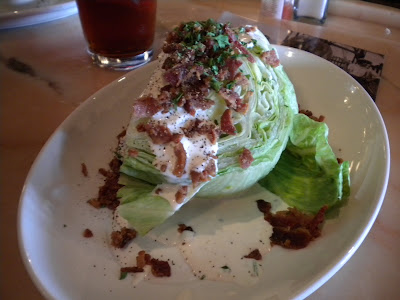 Iceberg lettuce, blue cheese dressing, bacon. The bacon was optional. When we were asked if we wanted bacon, the FP said, who wouldn't order the bacon? Vegetarians, muslims, jews, that's who. This was soooo good. As long as there's enough dressing and bacon, though, how can you fuck it up? There was plenty of dressing, a nice big glob for every forkful. 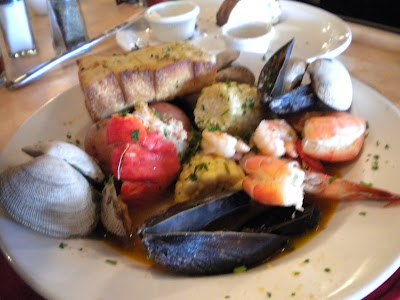 Anyway, he paid for lunch, dropped us off, and then headed back up to Irvine. Thanks for lunch Dad!!!!
eating food golden hill farmers market the Fish Market

caninecologne said…
the fp's dad sounds like a character from a book!!! ha ha. hey, u got a free lunch!

The Food Ho said…
Kirk - I think it's only been a few months maybe? I kinda used to veg out on Saturdays before work, so I was kinda aware there was a fm, but never thought of going until I became unemployed.