That explains a lot

Posted by The Food Ho on May 01, 2011
So, just so you know more about me, I've been having this ESP thing going on lately. So, the Food Pimp and I always have the same train of thought. I think it's just because we've spent half my life together, and we basically eat together and drink together, we would shit and piss together if we had 2 toilets. But lately, I've been doing other things. Like when I used to work, a week or two ago. This one girl I work with, PhotoChick, I asked her if she wanted a fish taco, and she said she was just thinking that she wanted one at that moment. Then we were talking about this other server who used to work with us, and La Cougar, and PhotoChick's fiance texted her right there and said he was at a bar with La Cougar. That's just the one example that I remember offhand. I also was thinking that something on the car was going to crap out the day before or the day that the car window crapped out. Maybe that's not too impressive, but I don't have much to go on right now.

Anyhoo, we've been eating middle eastern a lot. So, Sunday we went to Off the Sajj in Hillcrest. This place used to be Lucky Buck's - a burger joint. We went two or three times. The first time it was great. It was busy and the burgers were delish. After that, not so good. So, it's a great spot. Great location, and it's open and got a lot of light coming in, and a light breeze. So we got the foul mudammas over hummus with pita. So it's like stewed fava beans on top of hummus. Simple, double legume goodness! Love it! 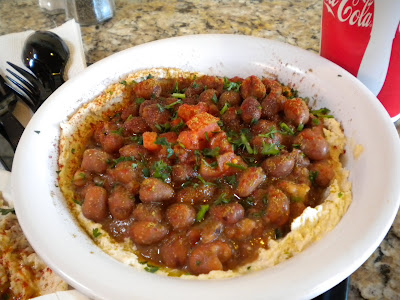 This was wonderful. It was not too garlicky, not too cooked down, just right. I do have to admit, this foul gives me the bloats and gas. Yeah. But I'm unemployed, so no biggie - just sit at home all day and fart...


Then I got the chicken wrap, because I was hungry. 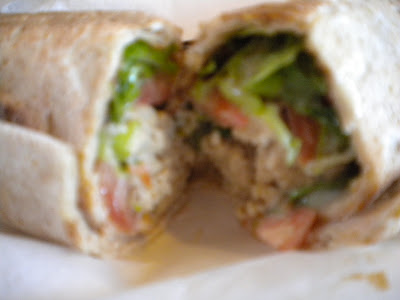 This wasn't so good. So it was supposed to be chicken shwarma. But I didn't see one of those gyro cookers with the chicken on it, so I should have known better. It was just that I had been wanting this, from seeing it at other restaurants. I also am so ADD and indecisive when it comes to ordering - those of you who read this regularly probably know this of me. So, the chicken wasn't anything special. The filling had lettuce and pickles, and it was just a little dry. I had ordered 2 sides of tatziki, since it didn't come with the food automatically, so that helped. I mean, I did eat it all - I was hungry and in danger of becoming destitute if I don't get a job soon or get unemployment. I know, then why are we eating out still? Because the way we shop at the grocery store, sometimes it's cheaper to eat out. Maybe not on this occasion, but why are you judging me? This is not that kind of blog! I don't claim to be intelligent or thrifty or financial adept at handling my money. For fucksake, we did go to Costa Brava that one time and get the Jamon Iberico that was $45!!!!!!

Can we please just get back to the matter at hand? So, I extravagantly got the foul mudammas, the chicken wrap and the Food Pimp got the gyro plate. The FP probably hates that he was barely even mentioned until the fifth paragraph. He probably wants me to change the name of the blog to the FP Pages. Not a shot. Anyway, his gyro plate was very interesting. 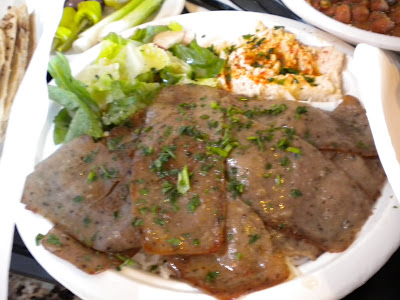 Look at the paper thin slices of gyro. Such skill! It just takes on a different characteristic when sliced that thin. I can't say it's better or worse, just different. I think it would be delicious in a wrap though. So he got hummus and salad and rice with it. The salad actually had enough dressing, which is always a nice surprise!

So, the foul also came with "vegetables" and pita. 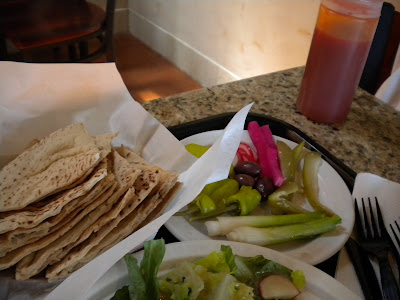 It was a pleasant surprise that the vegetables were pickles and olives! Those are some of my favorite kind of vegetable! We learned in New Orleans that those pickled pink turnip sticks are delicious, but most places if they have them don't give them out to nonmiddle easterners unless you ask for them. And, did I mention that the pita portion was more than generous? For that big vat of foul and hummus, we didn't use all the pita! We used most, but not all. That never happens! They always stiff you on the pita. So, I've only been here once, but I'm going to go ahead and give it a \/\/\/ 6 chopsticks rating. Clean, nice atmosphere, friendly service, not the greatest chicken, but everything else was great.

Anyway, as I ramble about food, on this food blog, you wonder, what explains a lot? What is the meaning of the title? Well, why have I been craving Middle Eastern food, as US special ops have been stealthily planning their raid of the Usama/Osama mansion/compound? I mean, the very day that they allegedly kill him, we eat middle eastern food. Over the weeks, I've been drawn to this food - after not really eating middle eastern much at all since moving to San Diego. Back in New Orleans, sometimes we would eat it once a week. So, yeah, either I have ESP, or they installed some kind of computer chip in my noggin when I was born. My family did always make the joke that they found me in a garbage can, but maybe they weren't joking about that. All I know is, I sense things when they happen. If you want me to read, not your past or your future, but your present, just hang out with me for a while. And presently, your current state of affairs will be revealed. Did you get chills down your spine? I did.


P.S.
So, here's one example of why I hate Yelp, even though I use it... I was looking up the address of Sajj, so I scanned the reviews, and this guy Robert B's review included this little gem,

"My two dining companions felt exactly the same. One complained that his meat seemed mechanically formed, like a "McRib.""
how gyro meat is made
Mr. Robert B, please take 20 seconds to research something like that before you make such an idiotic comment! Man, what is wrong with me. I think my unemployment staycation is ending. I'm starting to panic about not working...and I have no job to vent my anger at anymore!!!!!
eating food middle eastern cuisine