Posted by The Food Ho on June 15, 2011
So, the Sunday after my sis visited, we went up to Anaheim with our friend BG (Bass Guitar, or Bass Guy or Big Genius) . He had bought tickets to see Echo & the Bunnymen at the House of Blues. So we got rooms at the Super 8. The Food Pimp got a variety 12 pack of Kona beer. So we kicked back in the rooms and drank a few beers "pregame". So the beers were the regular, Pale Ale, Longboard Lager, another pilsner or something, and this horrible wheat beer. It was wheat with passion fruit! It tasted like a passion fruit soda, not beery at all! I guess if we were teenagers we would have loved it!

So, we got ready and we walked to the Downtown Disney area. We weren't quite sure how to get there, because we were told we would have to take the tram. But as we walked along the pathway, we saw that we were in the right area, just on the backside of the village. Luckily, there was an "employee entrance" that was open, so we could sneak in. So, we were going to eat at House of Blues, but the wait was 45 minutes to an hour. So we voted to go look for somewhere else. We went to Brennan's Jazz Kitchen. The wait was about 30 minutes to 45, but we decided we could wait at the bar there. So when we went to the bar, it was pretty empty, so we decided to eat there instead without a wait! The beers here were of course like $10 or something. But with my intolerance for alcohol, I only had one I think. There were a duo of New Orleans musicians playing, and the bar started to fill up. It felt pretty New Orleansy, actually. It was nice. We got the boudin stuffed mushrooms with a tomato vermouth beurre blanc. The stuffing was a little cold, but this was delicious! 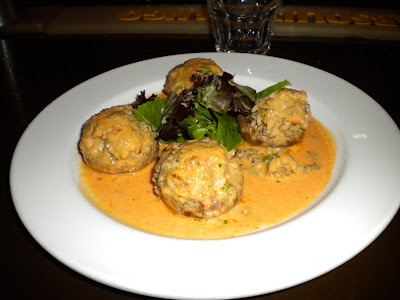 We also got the fried calamari with creole mustard aioli. 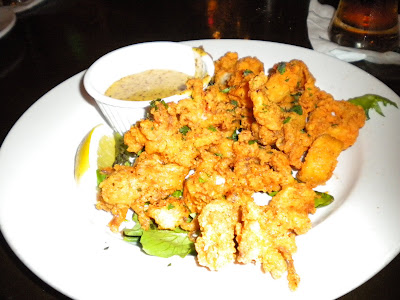 This was also spot on. Perfectly fried. Not chewy and overcooked, but not pale and undercooked. Just right. And the aioli brought back memories of New Orleans. 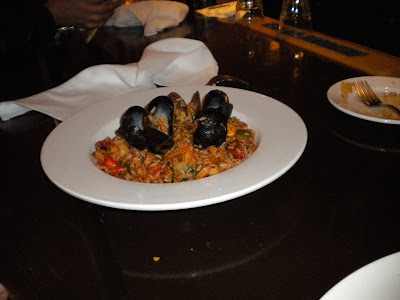 BG got the jambalaya. Which looked great. It also tasted great too.

FP got the gumbo chicken and andouille sausage gumbo. The bowl, which was ridiculously big. 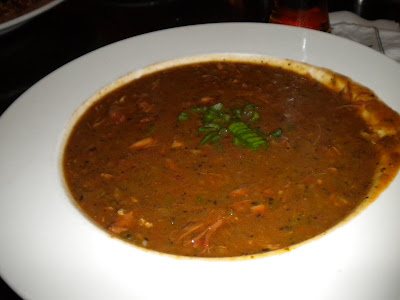 It was so good though. Deep and dark and rich and nola-esque.

I got the bacon braised turnip greens. 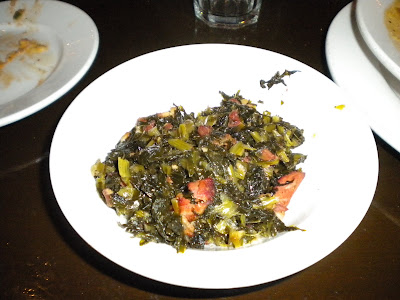 Which were like candy. Ridiculous. Leave it to the Brennan's to make greens as unhealthily yummy as possible!

I also got the creole onion soup. This is not your momma's french onion soup. It's not the old steakhouse's beef bouillon broth onion soup either. This was the shit. I mean, rich, sweet oniony, and rich, and worcestershirey and damn good. 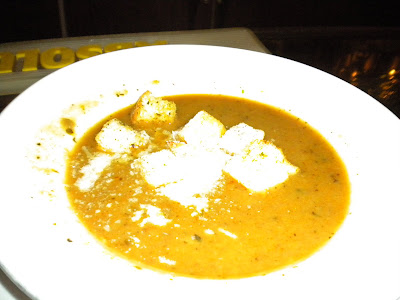 Loved it! Of course, it was a really expensive meal... with all those drinks the FP and BG were having. Then we went into the House of Blues to buy more expensive drinks. Of course I didn't have too many more.

So, this was Echo & the Bunnymen's last night in the USA, so it should be a great show, right? Especially because it was sold out. Well, the only thing was that they played in LA the night before, so Ian was sure to be hungover and cranky....which he was. And maybe his back hurt? So the first set was the entire album "Crocodiles". I haven't listened to Echo & the Bunnymen in ages, so I don't really know the songs anymore. But BG kept pointing out how Ian would not sing all the lyrics, like leave a verse or two off. It was a pretty disappointing performance. Then there was an intermission that was really long. Really really long. So finally they went back on to play "Heaven Up Here" in its entirety also. But they didn't. They played a couple songs, and then Ian muttered something and ran off stage holding his back. And then the rest of the band followed him. And they were gone for 20 - 30 minutes. Will, the guitarist, went back out to the mic and mumbled something about them coming back out in a while and asked the sound guy to turn on the house music. The sound guy probably didn't understand him because he didn't put the music on. Later on, a roadie went back out and asked for the house music. At which point it came on. Finally, they got back on stage, they played Killing Moon and Lips Like Sugar and that was it. Sucky show, but great food!