Posted by The Food Ho on June 09, 2011
So, Thursday, the FP had a cooking class, and he needed to get empanada discs. So we went to Tropical Star for lunch. We got empanadas, which were nothing special. They couldn't have been made there in house, of course. The chimichurri was good - even though I later saw that it was bottled like salad dressing on the shelf. But it was still good. 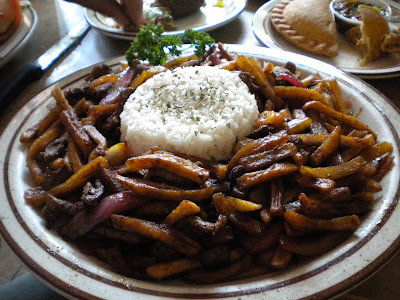 I had the lomo saltado. I hadn't actually had it for a while, so it was great to have it.

The FP had his usual arroz con camarones, which comes with yellow rice, beans and a salad. 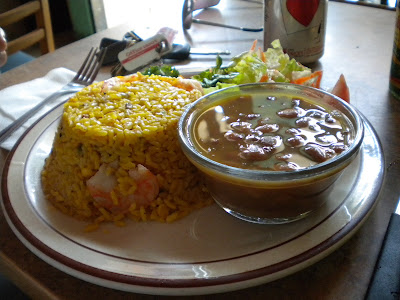 And my sis got the fricase de pollo, smothered chicken with olives and potatoes, carrots, and it came with white rice and beans. 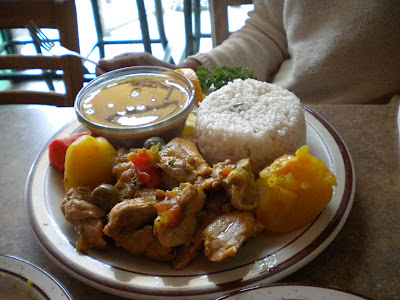 As usual, everything was really good. The things that aren't exciting usually are just premade frozen packaged food like empanadas.

So, the FP went to work, and my sis and I went to Coronado. We did the walk around the hotel, and then the walk down the beach to the dog beach and then back to the car.

When we got in the car, I asked my sis what she wanted to do - go home, go somewhere else? She said, whatever. So, I made a decision. We went down to National City. Funny, because my other sister had mentioned looking up rentals there. She's a hippie performance artist, and I just couldn't picture her in that area.

So we went to Seafood City and Red Ribbon and all the bakeries. The ladies greeted us in tagalog, which is always flattering. But then I have to answer in english. My sis contemplated buying a Sans Rival cake - almond, cashew meringue, buttercream, yum. We looked at it. And looked at it some more. I told her if she at any point she decided she should get it, then we could go back and get it. It looked kind of big, knowing how rich the cake is.

So then, we went to Tita's to look at the selection. It didn't look too exciting, so we went to Conching's. They had this gelatinous pork shank that was so...rich and glutonously wonderful. It was just so good. So good. It was stewed down to the point that the tendon and fat just melted in my mouth. I got mung beans. The mung beans at Tita's are amazing. They have dried shrimp and tender cubes of pork and spinach, and they are surprisingly delicious. These mung beans were just mung beans. So not bad, but not great. 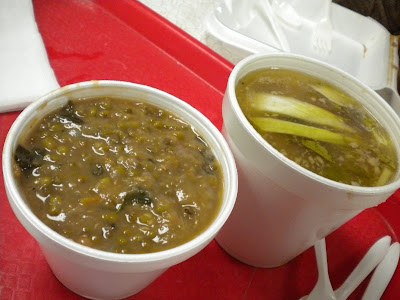 My sis got the sinigang. They made it with pork! It was so good. So obviously, even though there was enough food for the FP too, I had to get another order of the sinigang to go. The lady asked me if I wanted a medium container or a small - of course I wanted a large! Then she also asked if my sister wanted a top off of broth! Of course she did. The broth is kinda the best part of the soup. While the meat and veggies are good, the broth is what makes it really taste homey. We sat there and ate some and just enjoyed it.