A Weekend in Review

Posted by The Food Ho on June 04, 2011
So, two and a half weeks ago, my sis, Buffalo Rib, came to town. It was the anniversary of my mom passing away. So, she rented a car - they gave her a fancy grey volkswagen jetta, which is the car that the FP always wanted - and came from the airport. The FP had to work, so Buffalo Rib and I went to OB to have lunch. I wanted to go to a place on the beach where we could sit and feel the ocean breeze, or see the ocean, or something. So, I figured, we had never been to South Beach Bar & Grill, so maybe we should go there because they supposedly had really really good fish tacos.

So we sat upstairs, which was pretty nice. I didn't feel like a beer, so I had a diet coke. I felt like I should have had a beer, but my sis doesn't drink too much and she didn't have one either. But we got food.

So, I got the octopus cocktail. 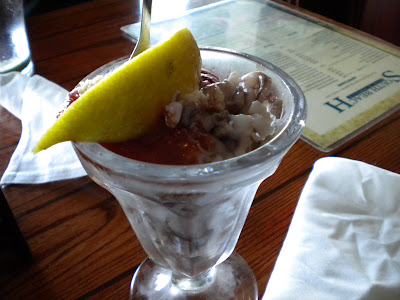 It was... cooked octopus in an ice cream glass... and cocktail sauce kinda garnishing it on top. Octopus cocktail. How much clearer could they be. Oh, except we were half an hour from Mexico, and they had tacos and stuff, so when I ordered a cocktail, I thought it would be "cocktail" not cocktail. You know - like a tomato juice and lime ceviche. With onion, cilantro, and avocado. I was picturing something so much more delicious than octopus with cocktail sauce on it. But I was hungry and waiting for my taco, so I picked at it.


So then the tacos came. 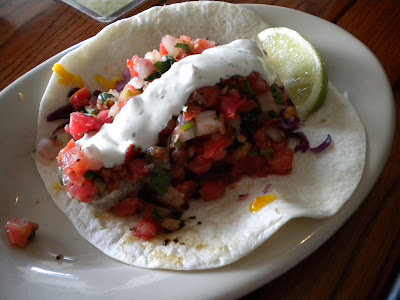 They looked nice. There was nothing REALLY wrong with them. The fish was grilled nicely enough. There was cabbage, and a lot of pico de gallo on it, some white sauce. But then there was a little cheddar. Was it like a mistake? Or maybe some white guy in there trying to put his little touch on it? Or someone from Texas? I don't know. At least there wasn't that much, so it didn't bother me. Maybe it was some ploy to keep the tortilla from breaking. I don't know. Really though, the best fish tacos in town? Definitely not. They were okay.


We were still kinda hungry, so we got the nachos. Unfortunately, I didn't get a picture of it. It was...weird. The beef was like chopped up carne asada meat, but it wasn't seasoned like carne asada, and it didn't have the char like carne asada. So it was like maybe bland old carne asada meat? Anyway, it kinda ruined the nachos. They were huge, and had lots of beans and guac and stuff, but the meat just ruined it. Mystery meat.

But my sis was in town, so chalk it up to quality time.


So, instead of the FP and I always having the normal back and forth - what do you want to eat, what are you in the mood for, what's for lunch, what's for dinner - there were now three of us having the normal back and forth. So, for dinner, it was, what do you want? I don't know...blah blah blah. The difficult part, was that the FP got home a little before 9, and most of the ethnic choices that we might have usually close pretty early. And I hate going anywhere less than an hour and a half before closing. This is an obvious thing to me, but maybe not to everyone. Don't go to a restaurant right before closing. Sure, they're still open, but they've been closing for the past hour at least. On some nights like Sunday and Monday, I've worked with cooks who are essentially working on closing as soon as they clock in.

Anyhoo, it was Wednesday. We had been talking about Bully's East for a while. We had gone there a year or two ago and liked it, so we had been wanting to go back. It's one of those old school steakhouses. It's dark with wood decor and red and banquettes. I had looked it up and Wednesday happened to be $15.95 11 oz prime rib. How convenient. Also, they close at 12:15, so they definitely would still be serving at 9. Of course, the FP said an 11 oz steak wouldn't be enough for him....

So, we got there, and there were still quite a few cars in the lot. We walked in and were seated right away. There were a few tables, but it looked like most of the diners were clearing out as we were just arriving. It was mostly couples, and they seemed to be all getting the special.


So, we each got the prime rib special. First they brought out the bread and butter. It was like black and white bread - sourdough and pumpernickel, with soft butter. Yum. 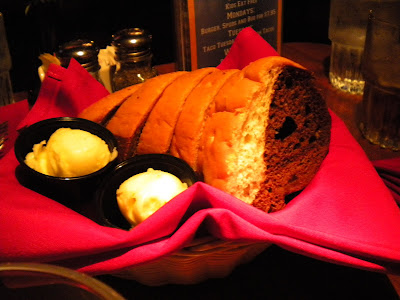 It comes with a house salad and choice of dressing. 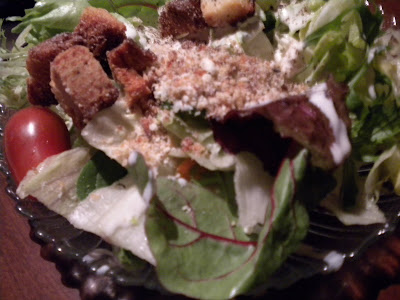 Of course, I had to get bleu cheese dressing because it was a traditional kind of place. So, you know, it was old school. Some mesclun and iceberg mix, grape tomatoes and croutons. And dressing on the side. You know, I had no complaints. I was perfectly satisfied with my salad. The FP was being "healthy" so he got balsamic dressing.

So then came the main attraction. 11 oz prime rib. 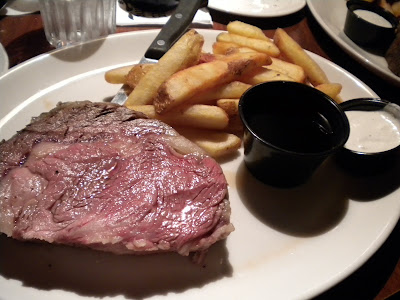 Medium rare for me and my sis. The FP ended up getting the 11 oz too. Rare of course. 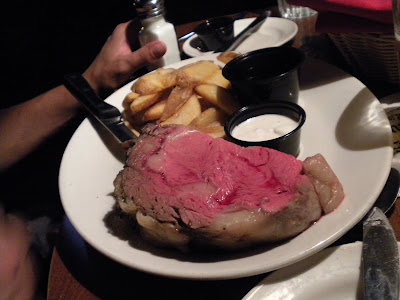 They came with steak fries, horseradish sauce and jus on the side. Old school. It was perfectly cooked, melt in my mouth perfection. Nothing like a delicious prime rib. I don't give a fuck about the hoopla about the bacteria and how it's kinda hanging out in the danger zone all night. It's delicious, and I don't ever recall getting sick from prime rib. I've gotten sick from other food, but not prime rib. Just like meat in heaven. I was full. But then, we were also getting dessert.

It was taking a while for the dessert. I guess it gave us time to digest, but we were getting tired and wanted to go home. I was thinking we should just ask for it to go, when the server told us that it was coming up. I figured they were breaking everything down in the kitchen. They probably made something up for the prime rib special dessert, and they probably ran out of it, so they were cooking up something different for us. Well, that was my guess. I just hoped it wasn't a boring piece of cheesecake or something.

So, finally it showed up. I can't tell you what a huge surprise this was. 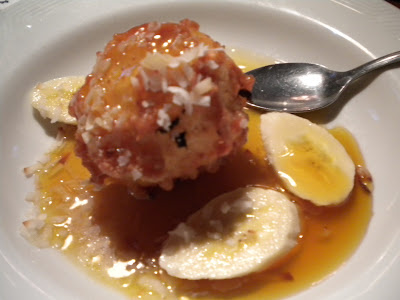 It was fried ice cream bananas fosters! It was such a welcome surprise, we oohed and ahed and gobbled it up! The coconut battered ice cream, the bananas and caramels sauce - perfecto! So my guess was, they were taking a joint smoking break and someone said, let's do fried ice cream! Surely they weren't doing this dish for everyone that got the special? I assume they sell a shitload of prime rib specials, so would be a pain in the rear to pump out a hundred of these? Plus I didn't see anyone else get this. Anyway, I don't know if it was the special that went with the prime rib, but I was ecstatic to get it. A wonderful end to a delectable meal!

KirkK said…
Hey TFH - Did the crema at SBBG taste sorta like Ranch Dressing to you? It kinda had that flavor the two times I ate the supposedly "Best Fish Tacos in San Diego"?
June 6, 2011 at 8:04 AM

The Food Ho said…
I don't remember, but I want to say yes. I would love to do one of those city vs. food contests for best fish tacos in san diego... I don't understand why everyone here doesn't make great fish tacos!
June 7, 2011 at 10:25 AM