Posted by The Food Ho on July 06, 2011
So, it appears that every city has a Greek Festival. Okay, I don't know that, but I do know that New Orleans has one and San Diego has one too. Both at these rather large greek orthodox churches. So, I had been to the one in New Orleans a couple times, and it was amazing. So, festive, lambs on spits, dancing and drinking.

So, we had been to the San Diego Greek Festival the first year in San Diego. It was a good day, so, this year, we were excited to be able to go back again. Also, I had just read a blog from Kirk from Mmm Yoso about the lamb plate. So, we went in, and I noticed all the grills were shut down. It was the evening of the last day of the festival, so maybe they had already cooked it all and it was waiting in steam tables. So we headed straight for the lamb tent. We ordered a lamb plate, and the woman told me that they were out. Out?! What? Out??!!??!!! That's why we came!! Wait, did she mean out for now? So I asked her. No, out for good. No lamb. :(

So, we had paid our cover, and we weren't going to just walk right out. There must have been other food to eat. We walked around, and we saw the pastries and saganaki and other stuff. I looked at the map, and I saw the cafeteria had a buffet line. So, we walked in there. It was like a church luncheon with more older people sitting together communal style. We looked at the serving line, and the food looked...old. I'm sure it was better when it was fresh, but it was probably a few hours old at this point. So we skipped the cafeteria.

We finally decided on a gyro. $9 for a gyro. 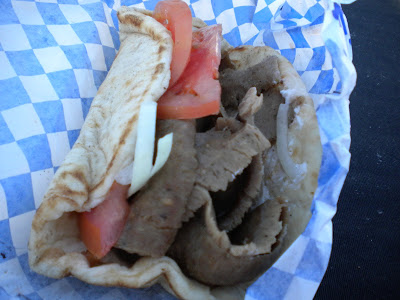 A little pricey, but, I figured this must be a hell of a party to put on, and the profits go back into the church, right? There was a bit of a line, but it moved fast since they already had them wrapped and ready to go.

What can I say? It was good gyro meat. There wasn't much to it. Meat, onions, tomatoes and yogurt sauce. I wasn't blow your socks off, but it wan't dogmeat either (no offense to you guys who actually eat dogmeat from dog that is "humanely treated" I guess. I have no idea what dogmeat tastes like).

So, then we got this sausage. 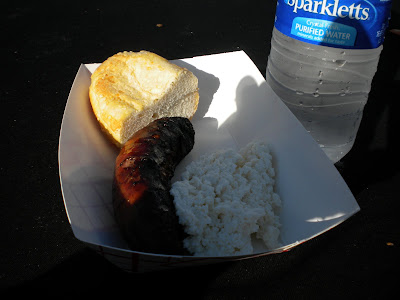 I don't remember the name of it. (bad food blogger, bad). Loukaniko. I felt bad so I took the 3 seconds to look it up. Anyway,it came with bread and greek feta type cheese. The sausage was nicely grilled. It had the char on the outside, but it was still moist inside and not all shriveled up as amateur grillers sometimes tend to kill their meat on the grill with the poking and prodding. So, the bread was like that Sysco type frozen sesame roll. Not good. The sausage and cheese. Oh - Ma - Gawd. Flavor! Having dull tastebuds, I like food with bold flavor. Like this sausage. It was so fucking good. I thought about getting another.

But, we wanted to taste more. I wasn't too excited, but I thought I'd go back to the lamb plate tent and get whatever they had left. So, I got a spanakopita and 2 grape leaves. 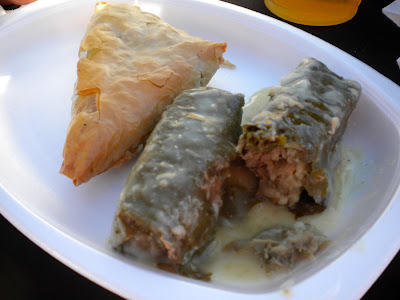 The grape leaves were smothered in this yellowish sauce that actually looked unappetizing. But, boy, looks do deceive. This was the best grape leaf I have ever had. Ever. The sauce was a creamy tangy lemon sauce. I mean, this was the best grape leaf ever and ever and I will probably never have one as good again! The grape leaf was nicely cooked - tender - not chewy at all. Sometimes you have to kind of tear at the grape leaf with your teeth to bite through, not this one. And the lamb and rice filling was nicely seasoned, but that lemon sauce was the icing on the cake!!!! I get hungry thinking of this! The spanakopita was good too. It was nicely cooked and seasoned, but it was spanakopita, and it just paled in comparison to the grape leaves.

So, the FP went back and got four more grape leaves, and we gobbled them up and talked about getting a few more. But, we didn't. We just sat in the beer garden and enjoyed our greek beer, the weather, the general festival chatter, and the music and dancing. It was a beautiful day and a wonderful festival. 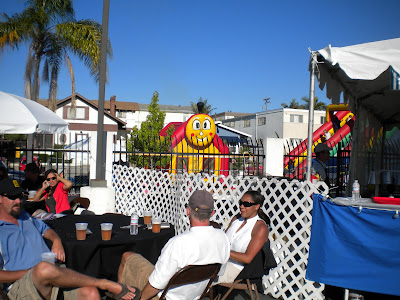 But, I was not done. I was ready for dessert. Loukoumathes. (Yes, I did have to google the name to spell it right.) So, these are like greek doughnuts. I saw them as we were walking in. And there was always a line for them. And I remember wanting them the last time we came to the Greek Festival but not getting them for whatever reason. So, this time, I was on a mission. I stood in line by myself while the FP held down our table in the beer garden. I was so excited that I got anxious. They weren't going to run out were they, like with the lamb? But when I moved further along in the line, I could see the fryer. They were just continuously pumping out the little balls of fry heaven. They would pop them in the fryer with a portioning batter thingamajiggy and then turning each one by hand when the time was right. Then, they would drain them and coat with honey syrup, garnish with powdered sugar and cinnamon and pistachio nuts. So, the deal was by the four. Some people were getting like 4 dozen. And seeing them get such big batches, I wanted a big batch. But I had to be reasonable. These were fairly perishable - I'm sure they would get soggy fast. And the FP isn't a big dessert guy unless it's an unbelievable dessert. So, I could probably eat four. I figured the FP might eat one or two, so that meant I had between four and seven for myself. That had to be enough. So, I got eight. It was difficult walking the few hundred feet back to the table and not digging in. But I had to follow protocol. Picture first. 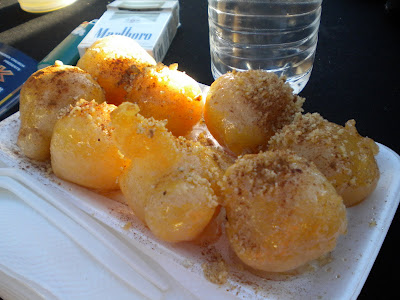 I cannot explain to you how fucking perfect these little fried ball of goodness were!!!!!!!!!
The honey syrup coating had hardened on the outside, but the dough was soft and sweet and warm on the inside. And the extra powdered sugar, cinnamon and crushed nuts (crushed nuts and fried balls? Sounds a bit redundant!) were not at all overkill, but a welcome garnish to a perfectly fried ball!!!!!!!!!! Sadly enough, for me, the FP ate all his balls. But, I knew that was a good stopping point for me. Because if there were ten more balls in front of me, I would have made a go at polishing them off. Yum Yum Yum. I cannot wait to go to the Greek Festival next year!