Posted by The Food Ho on July 01, 2011
So, I'm very much one of those "judge a book by it's cover" kind of people. I mean, if you know who Francesca Lia Block is, her book covers look appealing to me, and I love her writing. Same with Irvine Welsh.

Anyway, Yakitori Yakyudori is on the corner of Convoy Street (oh how I love that street) and Clairemont Mesa Blvd. It is next to a Starbucks. The signage for the restaurant is kind of minimalist, black and white. I never recalled hearing about the place, so I never thought much of it, as there are still some places on Convoy Street that I have heard of and not tried yet.

So, one night, I was looking up late night restaurants, and I found this place listed. So, it was on the radar. One day, we were on Convoy, and for whatever reason, the place we were going to wasn't open or too busy or something, so I suggested Yakitori Yakyudori. So, we parked, and that corner of the parking lot was packed. We walked in, and everyone kind of stopped and looked at us for a split second. It's a small place. So we were seated next to the other non-natives who seemed to be on their lunch break. Our first impression was that it was like one of those great little restaurants in Little Tokyo in LA. It was much warmer and homey looking than what the sign indicated to me.

So, the lunch menu doesn't have a huge variety of choices, but we were getting ramen. The Food Pimp, of course got the spicy ramen. 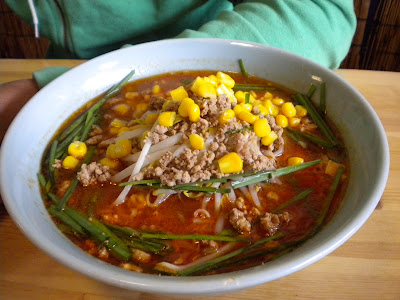 So, it had a plethora of components, most notably, corn! Corn. I love corn, but I don't expect to see it in a ramen bowl. But the FP said, that is actually made the dish. It "infused" the soup with that sweetness of the corn. (I hate that word infused now because lately it connotes an uppity attempt to be fancy and on the cutting edge, usually in dishes that are just generic and overdone) Anyway, it was a good bowl of ramen. It had all kinds of scraps of meat too.

I got the soy ramen. 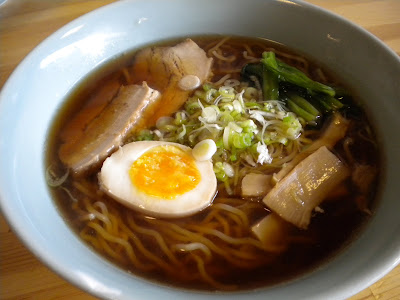 Soy. Soy sauce. It's like addicting. There was one time in my cooking when I pretty much put it in almost everything I made, sometimes things like chili. Anyway, this was the bomb, the shit, the shiz - just homey goodness. I didn't get the corn. But, the strips of pork were so tender and fatty melt in your mouth and porky goodness. My broth had a more simple flavor, but it still had depth of flavor at the same time. I know, I'm not the most prolific when it comes to describing food. But that's probably just one of the reasons that no respectable online or printed media genre would pay me to be a food writer.

Anyway, we also got the octopus balls. We thought we should get something else, so we got octopus balls. When they came to the table, they did a little table dance for us! 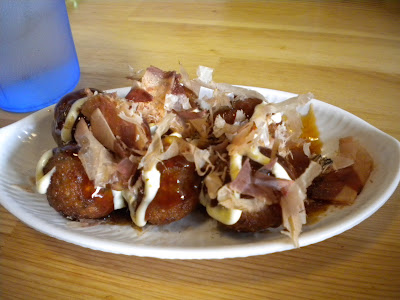 At first I thought I was having a major flashback, but then I realized that this was indeed really happening! There were bonita flakes on all the balls that were reacting to the heat from the freshly fried octopus balls, so it appeared that they were alive. They were amazing. They just kept dancing, so finally we just started eating them as they danced. There was like a sweet teriyaki soy sauce on them, so I drizzled a little vinegar on them. This was amazing. One of the most exciting balls I have put in my mouth for ages! I mean I really enjoyed the exclusive VIP all access party that was being thrown in my oral cavity! There was ginger and bonita flake and octopus, and a very light and seasoned batter holding it all together. I was just wonderful! It was like fireworks on the 4th of July, like ice cream and marshmallow and fudge sauce and caramel and colored jimmies, like unicorns and pegasus and rainbows and jelly bellies...like fostering a whole litter of golden retriever, samoyed, St. Bernard and beagle puppies!!!! I don't have any prior experience with these specific octopus balls, but I have never had a better seafood fritter, period. End of story. I don't think there's anything more to say!

And a week or two later, we went back about an hour before closing. We walked in, and they were all happy and friendly, and the place was still hopping, and they didn't seem annoyed at all at us being there. We ordered the exact same things. This time, my ramen had corn in it! That sweet perfumed broth was wonderful. And when we got the octopus balls, they were just as delicious and lively and interactive as the previous balls. Just great! I can't wait to go back again! Normally, I shouldn't give a premature chopstick review, but based on these 3 dishes, I'm going to do it anyway. \/\/\/\/ 8 chopsticks. 8. isa, dalawa, tatlo, apat, lima, anim, pito, walo. That's 1 - 8 in tagalog for those of you who couldn't figure it out. My friend's birthday was the other night, and the same night her boyfriend was in a hip hop battle show at the Kava Lounge. So we went to see them, even though that is not our thing at all. But the 2 times we've seen him, he was by far the best. Anyhoo, the 2 guys that went after him were Pilipino, at least one of them was. Sometime in one of their, songs, pieces, poems, raps, whatever you call it, they counted to three in tagalog. I could appreciate that. I used to be able to count quite well in tagalog when I was like six. Anyway, I've digressed. I like Yakitori Yakyudori, and they stay open a little later that most places.

caninecologne said…
hi fh- i've always wondered about this place but have never gone...there are a shit ton of places on convoy, it's mind boggling!

loved your description of the octopus BALLZ!!!! ha ha!

ramen with corn sounds good too!