Posted by The Food Ho on August 06, 2011
So, a couple weeks ago, this crew of San Diego food bloggers went on a BBQ tour. Sadly, I could not make it. But, of course, because of the mention of BBQ, the Food Pimp was craving BBQ. So, we decided to go to Abbey's Real BBQ. For some reason, possibly brain damage, aging or too many drugs and alcohol in the latter part of my youth, I always call this place The Abbey. The Abbey was this shady bar in New Orleans in the French Quarter which we used to frequent when we first moved there, and randomly on and off through the years. When I say shady, I mean people who were kinda shady would hesitate to go there - unless they were going to transact business, if you know what I mean. You know, buy and sell stocks, complete a short sale, merge corporations, expand operations to a global level, land that new advertising account, deliver an important powerpoint presentation.....

Anyhoo, getting back to Abbey's. We drove down Clairemont Mesa Blvd looking for this place. We had been there twice before, and we couldn't remember where it was. So, we picked up the trusty iphone, and it turns out we were looking for ABBEY'S, not the ABBEY!!! And it was a couple blocks from where we were.

So, it turns out that 2/3 of the very large parking lot was being resurfaced. So, we drove around the congested parking lot a bit, then we decided we could just park on the street, very far away. As we walked through, we were speculating as to whether the restaurant was even open. Luckily, it was. So, we ordered our grub.

We both ordered ribs, because we didn't feel like messin around! 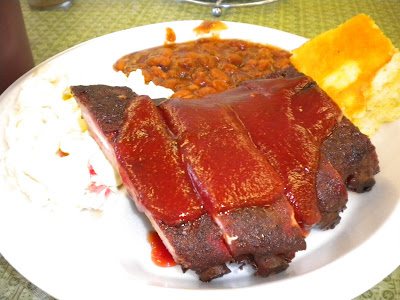 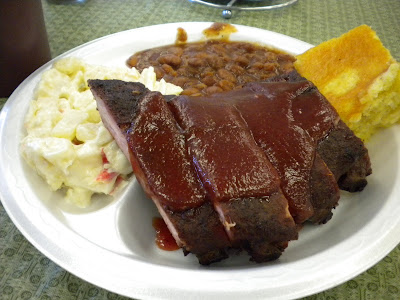 This is where I decided that I need a new camera. Look at the two photos of the same food. I'm not sure what's happening with my camera, maybe it's just kinda cheap, but the picture quality seems to be going downhill. It has held out for the past couple of years and served me well, anyway.

The difference was, the FP got the slaw Anyhoo, it was delish. And this time, I'm not even going to apologize for my absence the past couple of weeks. I'm sick of apologizing. I realize I had opportunities to write and I didn't. I've been noticing that I can justify not doing things even when I'm not working - it's called laziness, and I suffer from this condition. Is there a medication for this - a legal one, that is? Now I'm all backed up on blogs to write, which is better than not having material to write about because I haven't cooked or eaten anything interesting in a while, right?

caninecologne said…
hi fh! i actually have a coupon to this abbey's bbq place. i totally want to try it out now, except for that potato salad though. oh yeah man, ribs....

The Food Ho said…
Wow, where do you get all these coupons for restaurants that are more interesting than just El Pollo Loco?
August 9, 2011 at 4:11 PM

caninecologne said…
it's from the entertainment value book, the $20. i buy one every year from the music dept for their fundraiser. you can buy also buy it at wal-greens. the coupons expire on nov 1 though so i plan on using up all that shit before the expiry date. i have one for abbey's, bull's smokin' bbq, barnes (i liked their thin sliced brisket), and some place called mama chris bbq. for the record, i have never eaten at el pollo loco.
August 10, 2011 at 8:10 PM