Posted by The Food Ho on August 09, 2011
So, it's funny how I am a cook. And I'm unemployed. And I dread cooking at home most of the time. I guess, it's funny when you put all three of those sentences together, not so much each of them alone. Or maybe it's sad and pathetic. But, alas, I do not have a dream kitchen that one might think two cooks or chefs might own. The main problem is that the kitchen is all free reign for the Food Pimp to use for his job. So, you know, things get lost or broken or taken to a cooking class while I'm at home. I much prefer cooking in a professional kitchen where everything is supposed to go back in it's place because the people who are in the kitchen are paid to put things back and clean. At home, I have to be a self-motivated self starter. I mean, look at this blog. I only write it when the inspiration strikes. But, put some monetary incentive behind it (I mean more than the $1 a month I receive from advertising hits) and I could be inspired every day for several hours a day!

Anyhoo, getting back to the topic at hand, homecooking. Isn't this what everyone craves who doesn't get it all the time. And then people who never get to go out to eat and always have to eat homecooking (especially if it's not tasty homecooking or the company is displeasing) abhor the idea.

So, here's some stuff I've cooked in the past month. 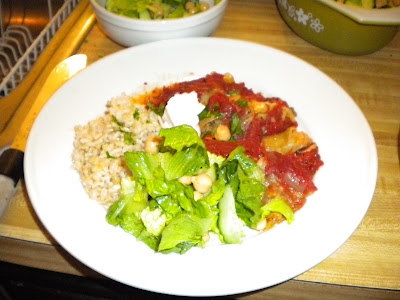 This is some kind of mediterranean/middle eastern type of thing I did one night. It was a tomatoey chicken stew, with brown rice, greek yogurt, and a simple romaine salad with chick peas, cucumbers and lemon juice and olive oil dressing. Simple, yet delicious. As Martha Stewart would so famously say, "It's a good thing." Anyway, the FP came home from work to find a surprisingly wonderful healthful unusual home cooked meal. 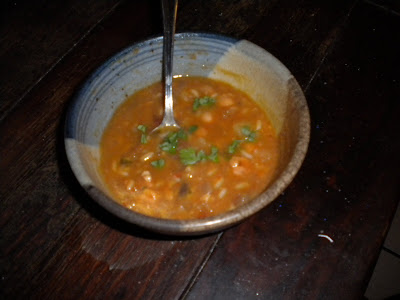 Now here is a tortilla soup. It was made mostly with leftovers. Onion, garlic, salsa, rice, a can of chickpeas, old tortillas, and maybe some chicken, I really don't remember! When I told the FP there was tortilla soup for dinner, he was not thrilled. When he tasted his first spoonful though, he was pretty blown away. I don't recall him ever having "real" tortilla soup. The brothy stuff with some fried or baked tortilla strips tossed in at the end for garnish is just not quite the same. So, it wasn't anything fancy or even a family recipe handed down. It was using mostly things in the kitchen and added cheap things to make a heartwarming home cooked meal. Which given my aversion to being barefoot in the kitchen (even if the floor was just mopped) is something special since it's kind of an event. 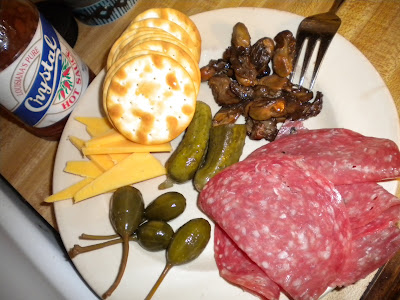 Here is my home notcooked meal. Whenever the FP goes out of town, I eat irregular meals and I eat weird things or cereal. I usually consume a box of cereal when he's gone. So, this time, he had gone home to groundhogdayville in the heat of summer. On one particularly warm day there was no way I felt like turning on the burner and raising the temperature in the apartment another 15 degrees to cook for one. So, I went to Albertson's and gathered ingredients for a cold plate. I felt so very european, even though cheap cheddar is very uneuropean. Anyhoo, I had the sharp cheddar, the water crackers, pickles, some cheap salami, caperberries (which we had) and crystal hot sauce. I ate 2 cans of smoked oysters, 2/3 of the crackers, 1/3 pound of cheddar, and over half of the package of the salami. The caperberries sucked. They were big and the seeds were very large and crunchy. Such a shame.

So, two weeks ago, I went back to my hometown to meet my sisters and check in on my dad. The first night my oldest sister got in town, we had dinner at my mom's friend's house. Being momlike, she has a full stocked freezer. So, we "threw" together a meal composed almost entirely of frozen food and canned food. So, she defrosted "minute steaks" to make pepper steak. So, her idea of pepper steak is totally different than my idea of pepper steak. She dredged the steaks in flour, salt and pepper and cooked them in the pan. We realized that one pack of meat had actually been ground beef, so that meat we just formed into patties and cooked with the rest. She sauteed a little onion and pepper with it and then made a gravy.

She had frozen corn that someone had given her, which she heated on the stove with some evaporated milk for creamed corn.

Then she took stewed tomatoes from her sister, added some onion and bell pepper to it, and heated it on the stove as well.

Being a cook, I was enlisted to cook the rice and "do the zucchini" not in a sexual way of course, she's a nice elderly republican military widow who would never think like that, and you should feel ashamed for thinking like that! Anyway, the zucchini was no doubt from someone's garden, and it was borderline, so I sliced it up and we just cooked it with olive oil and butter, salt and pepper.

My sister had the task of making the bisquick cheese biscuits.

So, it's all very Betty Crockerish sounding. In fact, when I was talking to the FP on the phone at one point in the trip and told him this was the best meal I had so far, he was disappointed and disbelieving. But he wasn't there to eat it. This is the man who was not thrilled about tortilla soup and then raved on and on about it for 24 hours after. 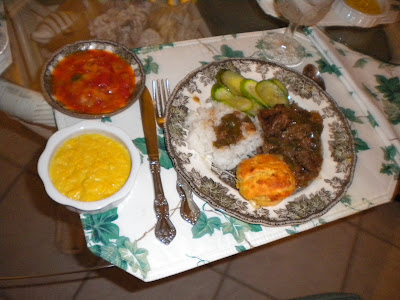 This shit was the bomb. All of it. Well, the zucchini was not exciting by itself, but combined with the rest of the meal, it was the best fucking meal I had eaten in a long ass time. I love corn, but sweet Florida corn lovingly grown in someone's backyard, then shaved fresh and frozen, then thawed and cooked on the stove with evaporated milk, that is some corn, boy! She kept saying how she usually uses half and half, but all she had was evaporated milk. I wouldn't have changed anything about the corn. Except maybe I would have eaten a second helping of corn before I held my baby nephew and smeared poop leaking from his diaper on to my hand and all over his onesie. After that, I was pretty much full.

Two nights later, my mom's other friend cooked for us. Her sister had just arrived from LA, so we all sat down to a nice Pilipino dinner. Pancit, sauteed veggies with beef, sticky rice, black beans and vegetable AND shanghai lumpia. 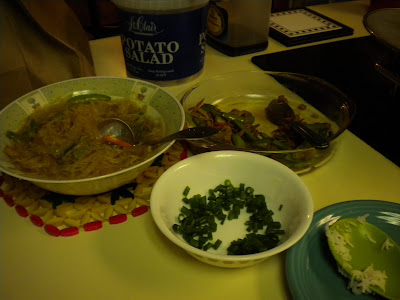 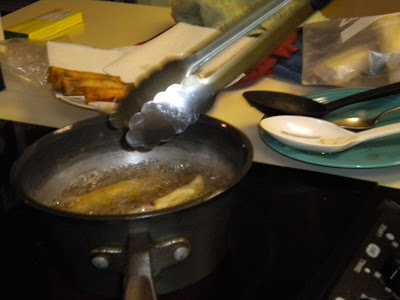 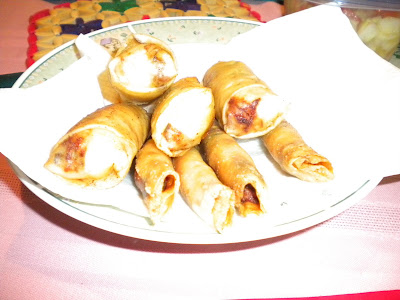 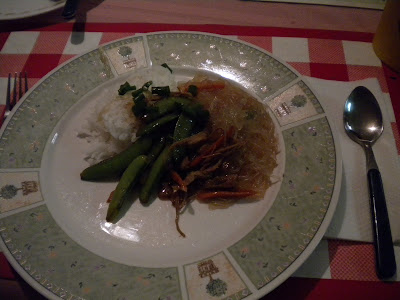 It was blissful. It was reminiscent of the home cooked meals that my mom will never ever cook for me again. The sauteed veggies and beef suspiciously tasted like my mom's. The flavoring, the doneness to which the sugar snaps were cooked - all just like my mom's. This woman had been one of my mom's dear friends though, in the last several years of my mom's life. They both had stayed with abusive husbands because of Catholicism. Although, my mom's friend had gained the strength and resolve to leave her husband and not subject herself and her children to the hostile environment. My mom got away from my dad, but maybe not in the way she had hoped for. It's nice, though, to understand what a good home cooked meal means to other people. I hope I can keep that in mind, along with my mom's welcoming spirit when I once again get to cook for a living, hopefully in my own restaurant.
cooking at home eating food