Posted by The Food Ho on August 31, 2011
So, I've been wanting to go to the beach, but the FP seems to be over it. I guess summer is almost over, so you can't go to the beach after Labor Day anyway, right? Naaaaaaaht.

Anyhoo, the other day we were trying to figure out where to eat. I felt in the mood for seafood, which is unusual. I have been having acid reflux issues, so I didn't feel like eating anything too fatty or overly spicy. So, ideally I would have wanted to go to the beach and eat, but it might have been busy and the FP didn't seem into it. So I just googled seafood san diego. Of course yelp was one of the first sites, but I looked at it like I often do. Just because I think it can be bullshit doesn't mean I don't use it! So, anyhoo, this place called TJ's Oyster Bar caught my eye, and it wasn't in TJ. It was in Bonita, which I used to think was so far away, but now I realize it is actually really close.

So, the FP was game. He liked the name TJ. So we were driving to Bonita, and he said, I thought you were going to pick somewhere by the beach! Whatever. It was a lovely drive to Bonita. So we exited, and we were rubbernecking bigtime, and there were all these places, a caribbean place, lots of mexican (surprise, surprise), a place that looked spanish tapas, and some other places that all piqued our interest. According to the iphone, we missed TJ's, so we turned around. We didn't see it, so we had to drive all slow and touristy. We found it in the corner of a shopping center. It was very small, so it was easy to miss.

So, it was like a TJ oyster bar. It was this teeny place with mostly counter seating, a couple tables and a counter against the window.  Except it was clean.  You order at the cash register and then sit and wait for your food. So, we ordered, the cashier repeated my order twice, which was good, because she said "8 tacos", and I thought I had heard "a taco". And she said, that's why I repeated it twice. I mean, we've been known to eat a lot, but not quite that much. And actually, I wasn't ready to gorge on a big meal because of my digestive issues.

So we sat at the counter so we could watch them cook. The one guy did all the cooking, and the other guy finished the plates. It was like watching the cooks at Waffle House, all organized and methodical.  As we were waiting, people started piling in.  In a few minutes, there was a line out the door.  Okay, the place was small, so that wouldn't take much, but all the seats were spoken for and there were also people waiting outside as well.  So, we definitely knew this was going to be good.

So, I got three tacos. Whoopee, huh? That's really what I wanted though. 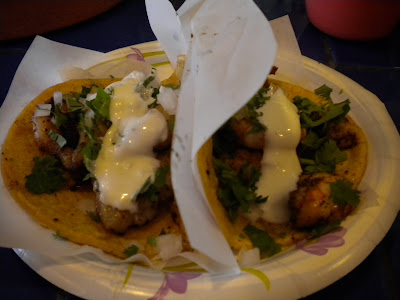 So, here are my shrimp and garlic taco and my grilled fish taco.  Really simple street tacos with a little red onion (thankfully), cilantro and white sauce.  They were a little small, but really good.  The shrimp and fish was seasoned nicely. 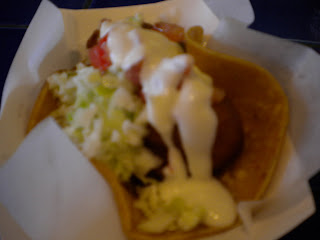 And here is my fried fish taco.  This one had some tomato and cabbage and white sauce.  Yeah, I shouldn't eat tomato either, but it wasn't that much.  I liked this one better because of the batter.  Can you say that sentence fast three times?  Probably.  Anyway, the batter was seasoned properly and it had stuff in it, herbs and spices.  So, yeah, I usually like the deep fried fish taco better. 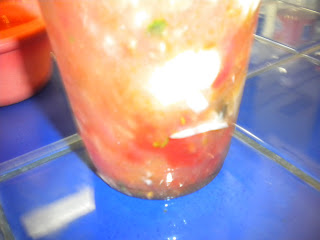 This is not the best picture, but this is the FP's oyster cocktail.  It was so good.  The clam juice and stuff was so fresh and yummy and refreshing.  I loved it.  And yes, there was more tomato and raw onion.  But I barely ate much of it, just a taste, really.  The oysters tasted fresh too.  The FP wanted to get the pulpo cocktail, but since the place had oyster in the name, he felt like he should get something with oysters in it. 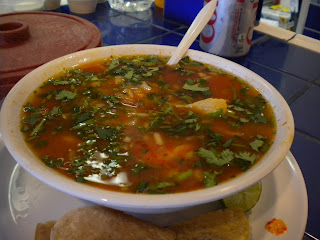 This was the FP's 7 mares.  You know, that's been his thing lately.  So, I asked how it compared to the San Clemente place and Ranchos.  He said, it didn't even compare.  It was way better.  Like we were in TJ, with hopefully no food poisoning.  But this place was so clean.  It was nice.  Like going to TJ without the hassle of crossing the border and eating at a dirty place and having people hound me to buy shit.  Anyway, it was very flavorful, with like that clamato mix with extra clam juice and shrimp stock or something.  It was really clean tasting.  We were very happy.  Although, as I watched, I saw what looked like smoked marlin on the grill.  I didn't see it on the menu.  I did see smoked tuna, though.  So either that was off the menu smoked marlin or smoked tuna.  Either way, it looked good.  If the place hadn't been so damn packed and people waiting for our seats, I would have gotten one.  But there's always next time!  Because you better believe, we are definitely going back to Bonita!

caninecologne said…
hi fh! hey girl, you were in our hood! i tried going to this place before but the long lines always deterred me. there is an empanadas place a few doors down that's pretty good, although i can make my own. my sister raves about the tj oyster bar (not the blue oyster bar, heh heh).