Posted by The Food Ho on September 16, 2011
So, last weekend, we went to South Florida.  We were checking out the area.  To move there.  While San Diego is America's Finest City, it's not quite working for us.  So, if we move to South Florida, we can still enjoy the beach for a better price point.  And there are still lots of rich people for the FP to work for....me, I really have no idea what the fuck I'm going to do.  As long as I can get some job making money to begin with, that's good enough for me.

So, we flew in Thursday night.  Opening night of NFL.  Saints Vs. Packers.  So, we had to find a sports bar near the hotel.  We found Palm Beach Ale House & Raw Bar.  Ale and Raw were the two key words.  So that's where we went.  There was a large patio area with tables and chairs and a large bar and several tables.

So, we had beer.  Yuengling, of course.  It's like our official beer when we are in Florida.  And we had 2 dozen oysters. 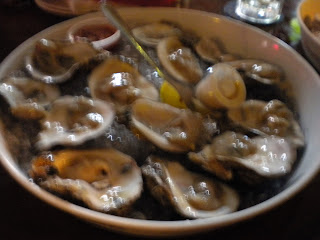 My own plate of oysters.  14 oysters.  Not sure why.  Either someone can't count or they counted a couple small ones as one oyster.  Anyway, I have to say... they were disappointing.  They were not very flavorful.  They may have been the pasteurized ones that just taste like water.  But, we pretty much ate them all anyway. 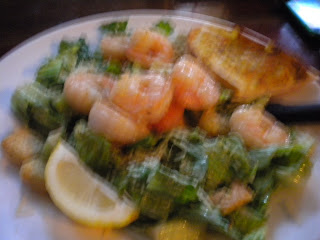 Sorry for the shitty pictures.  My camera is not doing too well.  Anyway, that was a shrimp caesar salad.  Weird choice?  Well, that just happened to be what we both ordered.  We needed some greenage.  It was actually a very good salad.  Good dressing, good shrimp, no complaints at all.  The game, on the other hand, was very disappointing.  We left around the start of the 4th quarter.


The next morning, we were looking around West Palm Beach.  We went to eat lunch on PGA Blvd at the Waterway Cafe.  It was on the Intercoastal Waterway.  So, we ate outdoors, right on the water.  It was pretty damn nice.  We got to watch the fancy boats go through the drawbridge.  And we had seafood. 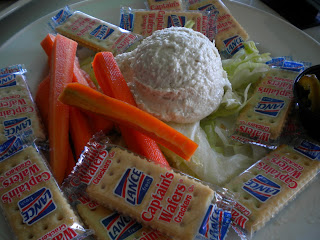 This is smoked fish dip with carrots and pickled jalapenos.  As we would find out, this is a regional standard on all menus.  So, it's like a mix of local smoked fish like mahi mahi.  Although, they like to call it dolphin down there.  Not dolphin fish, but dolphin.  I had always wondered when I started cooking in restaurants why people thought we were serving dolphin the mammal.  For whatever reason, they like to call it just dolphin.  Weird.  I mean, if that were the case, then Ric O'Barry would be showing up at every restaurant in South Florida making a big stink.  Anyway, the fish dip was de-fucking-li-shus.  It was just the right balance of fish and smoke and... cream cheese, yum!  And I grew up on Captain's wafers.  I would eat packets and packets of them in one sitting.  So, I enjoyed spooning a big heap of fish dip on one of those and going to town. 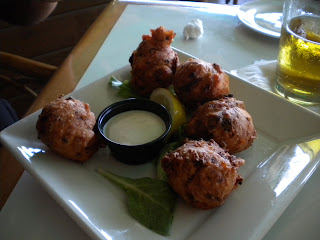 Conch fritters.  I fucking looooooooovvvvvvvvvvve conch.  It's good shit.  And who doesn't love fritters.  So, the batter was good.  Nice and seasoned.  And then when I got a bite of chewy conch, that was wonderful.  And the key lime mustard sauce was the perfect complement.  Man I love conch! 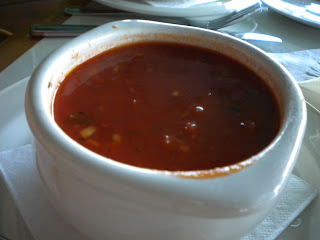 So, we got the conch chowder as well.  Also delicious.  It was vegetably, conchy, tomatoey, and just a really good soup! 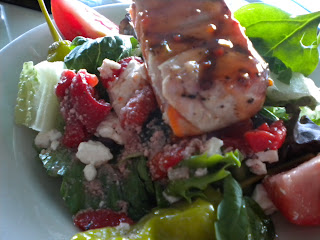 We also got the greek tuna salad.  We didn't ask for a split, but they just did it without us asking.  That was a nice touch.  Although we asked for the tuna rare, and it came to us medium well.  Oh well, the salad still was nice.  Roasted red peppers, feta (this seafood cheese combo is acceptable to me), romaine, pepperoncini.  It was a very nice salad.  And the view was amazing!

So, for dinner, we figured we would go to the happenin area, Clematis Street.  We got there around 8:30 on a Friday night, and there was no problem whatsoever parking.  We walked down the street, looking for an appealing restaurant.  We decided on a fairly quiet cuban restaurant - Don Ramon.  We hoped that it was not busy because it was still early, not because it wasn't that good.  After all we were in south Florida!  So, we got mojitos.  They were good.  We got an empanada. 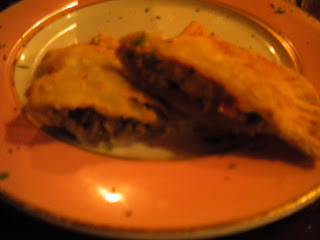 It was good.  It was an empanada. 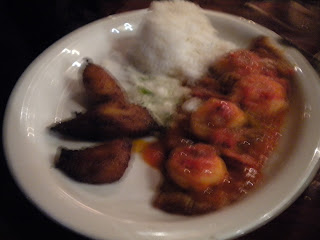 The FP got the fish and shrimp with creole sauce.  The sauce was really good and homey.  The shrimp were nice, the fish, which I presume was tilapia, was okay.  The plantains were delicious.  Nicely fried on the outside, soft and sweet innards. 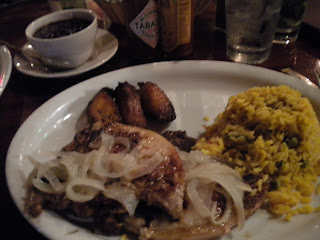 I got the pork chops with mojo sauce.  The meat was kind of dry, but I just wanted something cooked in mojo sauce, and that's what I got.  The fat was the best part.  The onions on it were tasty, as was the yellow rice, the black beans, and my plantains.  It wasn't the best cuban food we've had by far.  But it was decent.  And we were in a new place on a new adventure!
Palm Beach Ale House
Waterway Cafe
Don Ramon Restaurant
eating food seafood south florida west palm beach

caninecologne said…
that's nice you guys got to do a quick getaway. i've only had conch a few times - always fried. i wonder if there are other ways to eat it besides fried. well, it works for me!
September 17, 2011 at 10:51 AM