Posted by The Food Ho on September 05, 2011
So, once we discover a new restaurant or a new area of restaurants, we get excited and go there a lot, and then we overexpose ourselves to the place and don't go back for a while.  This seems to be what we are on track to do with Bonita Road, Canine Cologne's hood.

We went to TJ Oyster Bar.  Then the FP told his cooking class about it.  Fortunately, some mexican ladies were in the class, and they gave him the names or directions of other mexican restaurants to try, and one thai place.  Interestingly enough, they had been to Sab E Lee, but they told him of another Thai place that they liked better.  They didn't list the name, so I have no idea what this place is.

Anyhoo, what we were more interested in was the mexican places.  So, one day for lunch we went to Los Arcos on the other side of the 805 on Bonita Road.

We knew it was a Mexican chain, but not much else about it.  When we walked in, we were surprised to see it was a brightly decorated with colorful caribbean resort colors - torquoise, orange, yellow, green, and that it was a sit down service restaurant.  For whatever reason, I expected it to be more of a fast food joint.  I guess because it is a chain. 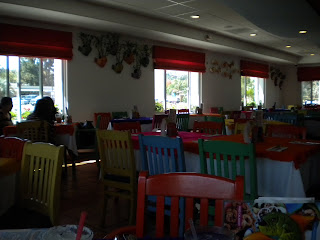 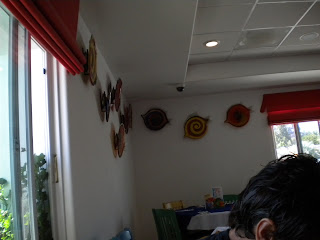 So, the FP ordered straight off the scrap of note paper.

First came the chips and salsa.  The salsa was kind of chunky puree, with canned tomatoes, but it was good.  It looked like that Herdez salsa.  No picture, cause I'm dumb.

The FP got a margarita.  No picture again.  Two thumbs up! 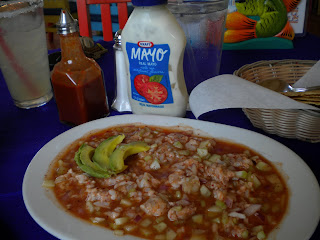 Los Arcos Special Ceviche.   It was like this shrimp ceviche that was delicately marinated.  The shrimp was tender and tasty, and the juices were fresh and not too sour or sweet, with a nice amount of orange juice, as the FP pointed out.  It was like $15, but the portion was a good size for the price.  This was the best ceviche I've had in a while, although I haven't had ceviche in a very long time.  I did try it with  the mayo, and I kinda liked it.

We got guacamole too.  This came after our empty chip basket had left the table.  Once again, no picture!  It was a small plate of guacamole spread on it with three chips sticking out of it.  We thought it was a little sucky that they didn't bring us more chips with it, but it's not like we asked for more.  We did still have our ceviche and tostadas, so we ate the guacamole with that.  Once some more salt was added to it, it was perfect.

I wasn't sure what to get.  I tend to look at prices to help me determine my order.  The FP can look blindly past the price tag, this is a true testament to our both very diverse upbringings.  I was still coming off of my horrible acid reflux episode, so I didn't want to eat a big meal or anything that I thought might bother my pussy digestive system.  Most of the menu was plates, not much a la carte, so I got a shrimp taco... I can't remember what it was called!  It's not on the website, and I don't know where that precious scrap of paper is.  Wow, this is once again one of those uninformative blogs where I can't give specifics or photos.  I guess this is one of many reasons why I'll never be a real food writer!

Anyway, I forgot that I was supposed to get it fried.  It was...okay.  It had cheese melting on it.  If you know how I am about cheese on stuff like this, I'm not a big fan.  There wasn't a whole lot, so it was okay, but I can see how it would be better with fried shrimp.  The shrimp were nicely cooked, though.  The tortilla was nicely grilled. 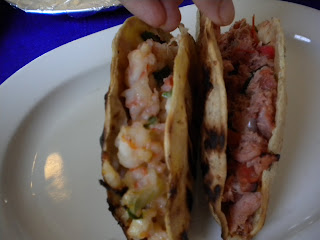 I also got the smoked tuna taco.  I had really felt like I missed out at TJ Oyster Bar, so I ordered one at Los Arcos.  This was not recommended by the Mexican ladies, and I knew why when I took a bite.  I'm sorry, but it was...gross  It was just smoked tuna shredded and packed into the tortilla.  It was warm, definitely not grilled or anything because it was just pink.  There was a little whatnot on it, but not much to it but the strong smoked tuna.  You know how it seems that there can never be too much filling in a taco?  There was too much.  I ate less than half of it, and I only ate that much out of hunger, and not wanting to be wasteful.  This was a poor choice on my part since it wasn't on the list! 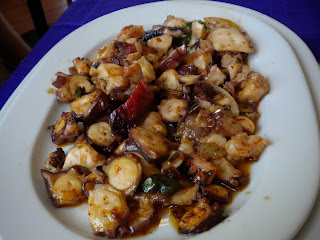 Mongol Octopus (It was not under this name on the menu, so we found it by the description)
This shit was so fucking delicious!!!!!!  I can't tell you how amazing it was.  It was the most tender sliced octopus, cooked with some shrimp and smoked tuna for flavoring.  OMG!  You need to go to Los Arcos and get this dish ASAP!  So, so, so fucking fuck your giant stuffed giraffe (Wilfred reference) delicious!!!!!!!!!!!!! 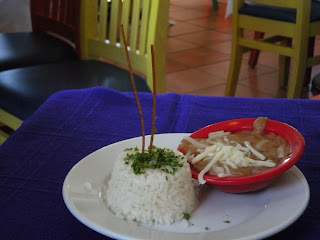 The FP also had to get a side of beans and rice.   Yeah, beans and rice.  The fried noodle antennas crack me up!  I'm not sure what the deal with this garnish is, but it's amusing to me, and I've seen it more than once.

So, this was quite an expensive tab.  It was more than if we had gone to Bully's East the night before for special prime rib.  But it was so worth it!  We will be back again, but we will have to be loaded with a ton of cash!

caninecologne said…
i haven't tried this place yet. i believe it's a chain from mexico. they have a coupon special either in the union-trib or reader (2 fish filets prepared diff't ways for $20). gotta try it soon.
September 5, 2011 at 4:28 PM