Posted by The Food Ho on October 18, 2011
So, a couple weeks ago, I went to lunch with Canine Cologne, of the blog Pink Candles at Ridgemont High.  So, if you've never seen her sight you should take a gander.  She blogs about food, and other general stuff; pop culture and fashion.  And she loves Tokidoki.

We had gone to Sab E Lee way back when, and then a year or so later we went to Ba Ren with Kirk K of Mmm yoso.  If you haven't read this blog, you definitely should as well if you are serious about ethnic food.  He's like a food almanac.  I think I told him that he should teach a gastronomy class at a university.

So, anyway, CC asked me where I wanted to eat.  I'm so damn indecisive, so I was like, "I don't know...."  So she gave me a few choices, and I was like, these two sound intriguing.  The other two were soul food places, which while I love this kind of food, I figured the other two choices were places I might be less likely to go to with the FP. 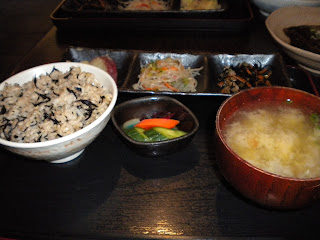 This is my "basic set."  Basic set doesn't sound like food to me.  It sound like...maybe makeup or kitchenware or maybe your wardrobe.  Anyway, it was miso soup, rice - I chose brown rice just for something different,  pickled cucumber and carrot, japanese potato, rice noodles, and a seaweed salad. 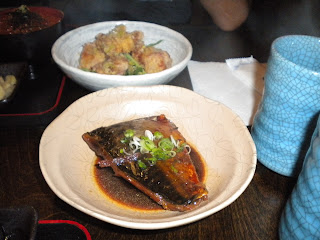 Here were our protein choices, I guess you would call it.  CC got the chicken, and I got the mackerel.  They were both really good.  The chicken pieces were little crispy nuggets of goodness fried in tempura.  I love tempura.  I don't eat it much, but man, it is a great way of frying anything!  When I worked at the Windsor Court way back when, we once had this dessert that was wedges of peaches fried in tempura.  Were those good!

The mackerel was so good.  It was in "original sauce"  which seemed to just be some type of soy and vinegar type sauce.  But you don't need much for mackerel.  It was kinda funny though, because the piece that I gave CC had like 5 or 6 bones in it, and of the rest of the mackerel that I ate, I only got 2 or 3. 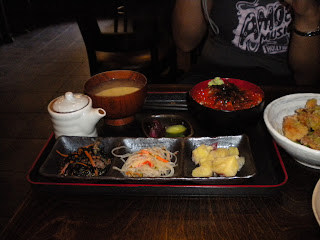 Here's is CC's basic set.  She got the rice with added salmon roe.  Too much roe though, as you can see. All of her rice was permeated with the fish egg flavor.  Seems not cost effective to give that much roe anyway.  So, I would like to come back here for dinner.  CC said the dinner menu is more izakaya style for dinner - lots of skewers and other snacky dishes.  But, she also said if you go on the weekend you definitely want a reservation.  Hmm... sounds like an early evening weekday dinner for us.  That's what we prefer anyway.  The sucky thing about that, is that when we move to South Florida we will be jostling for tables with all the blue hairs for the early bird specials.

So, after lunch, which CC so graciously treated, we went up Convoy Street.  It was lunchtime, so parking was shitty, surprise surprise.  So we parked on the street.  We walked over to The Fruit Shop.  CC took lots of pictures here in her blog entry, The Fruit Shop.  There were cool asian fruit.  Some of the same weird stuff you will find at 99 ranch, but without the hassle of going to 99 ranch market.  This woman kept trying to give us samples to try.  She gave me a longan.  CC passed, as she didn't like those.  It was... okay.  Not much flavor.  I don't know if I've ever had one, so I don't know if it was peak taste or not.  I was expecting it to be more flavorful like a lychee.

She gave us tastes of jackfruit.  Once again, it lacked a little flavor, although it looked like it was going to be really good.  The thing about a lot of this exotic fruit is that it's expensive.  Some of the stuff was sold packed in plastic containers or bags, so it was kind of expensive.  I guess that's why they try to force you to taste everything, because hopefully, you will taste something you like and be okay with spending the cash.  CC got a kiwi.  It was one of those paler larger golden kiwis.

So, then we walked over to Pangea,  which CC posted about here: Pangea. 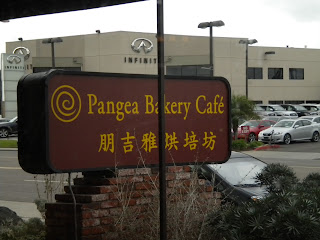 So, it was a cool Taiwanese bakery with lots of different buns, including those hot dog buns, which I have yet to try.  It was all interesting, but since we had just eaten lunch, nothing really grabbed me.  If I had been starving, I probably would have picked out 3 rather quickly.

So, it was weird because we heard piano music.  There was a piano in the corner.  We thought it was like a piano player thingy.  Then CC pointed out that there was a man playing piano.  We hadn't seen him when he walked in.  He was playing popular hits from like the 80s and musicals and stuff.  Of course, CC could tell what every single song was a few notes in.

So, CC suggested we look at the 2 for 1 buns.  She got a chocolate bun, and she suggested I try that dried pork one that her friend likes. 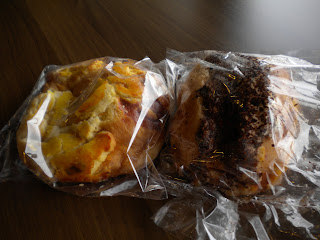 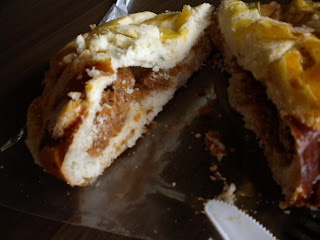 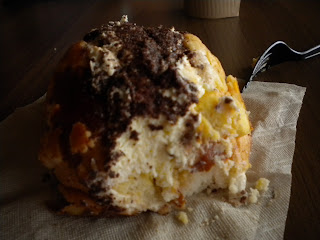 Why the hell not?  I like pork buns, and for the sake of research, I definitely thought I should try it.  The chocolate one was only topped with chocolate, and the custard was not chocolate.  So, this was somewhat disappointing, but it was still good.  The pork had a good taste, but I'm not sure what I expected.  It was crumbly, like pork dust.  I guess I thought it would be more stringy like pork jerky or something. 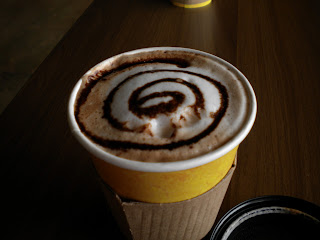 Then we also got mochas.  I never drink mocha.  It was a special treat.  I just drink iced Bustelo and soy milk in the morning, but this was a special occasion.  My last lunch with CC.

great write up! i totally forgot about the elderly asian playing the piano!