Posted by The Food Ho on October 08, 2011
So, I feel like I haven't delivered the promise of the blog title.  Here you go. 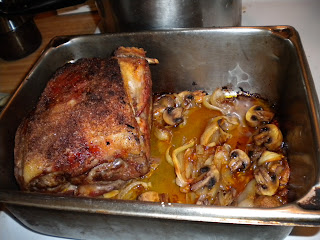 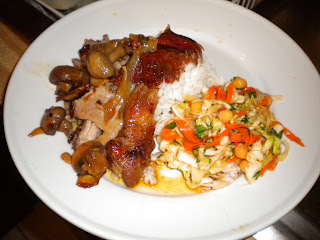 Yummy roast pork butt (hehe, I said butt) with mushrooms, onions and garlic.  Yum.  I love roasting meat and throwing onions and mushrooms in the jus the last 30 minutes of cooking.  I don't know if there is anything as beautiful in the world of cooking!  It just soaks up all the flava!  So, I made calrose rice and cabbage slaw.  It was a lot of pork.  Especially since the FP has been on a, (whispered) diet.  He's been gearing up for a marathon, so, he's been eating 30 - 50% less.  So, I've been cooking too much.  We've been eating the same meal 3 or 4 times in a row.  So, I did make a cuban like pressed sandwich a couple of times.  That was good.  Sourdough, swiss, horseradish mustard, lots of pickles, thin sliced pork and hot sauce.  So good.  But then, we still had a lot of pork left over, and it was about to graduate preschool, so I did what I always do.  I made soup.  LEFTOVER PORK BUTT SOUP.  I had to write it in all caps because the blog entry with that title is like the most viewed one.
Anyhoo, I just threw together a Philippine tasting soup.  I sauteed onion, ginger and garlic.  Then I threw in mushrooms and let them cook a minute or two.  Then I added soy sauce, Rufina patis (Philippine fish sauce), rice vinegar, and some spice mix I had made for BBQ.  I let it come to a simmer, then put some water in and let it roll a bit.  Then I added some potatoes.  When they were almost tender, I added chick peas and sliced pork and let it go ten more minutes.  Heat some left over rice and throw it in, delicious pilipino taste!  So, we ended eating the entire pork butt.  I love not wasting cooked food!
cooking at home eating food pork butt roast pork

caninecologne said…
Now that is a welcome sight to see - roasted pork butt with mushrooms! I like your mix of ingredients. Man, I wouldn't mind eating that for days...
October 9, 2011 at 12:08 PM