That Place That Really Had A Big Influence On Our Lives

Posted by The Food Ho on November 27, 2011
So, why so cryptic.  Sometimes, I don't like to name names.  Seinfeld reference, if you're old enough.  Anyway, I'm just going to write about this place that we went to for dinner when we were in Nola.  Both the Food Pimp and I worked there.  I worked there for 4 years from pantry chef (lol) to saute and grill to sous chef.  The FP worked the grill and saute station the first time.  The second time he became chef.  I don't want to directly name the place because I know people do google searches on restaurants.  I don't like to call attention to my true identity to people who don't already know I write this blog.  I don't want anyone I know to necessarily find it by chance, you know?

So, honestly, I wasn't too excited to go there.  I mean, we only had so much time in New Orleans.  I would have liked to go to an old favorite or to an exciting new place.  But, when we go to New Orleans, it's really all about the FP.  I'm not being sarcastic.  For me, I just love being there.  I'm such a bad friend (and family member) I don't really keep in touch with people outside of facebook.  So, when we go to Nola, the FP makes the plans.  I might try to make plans to see my one good friend, Ms Snowbliz, and maybe one or two other people, but the FP makes all the calls and texts.


Anyway, we were going to meet our buddy, Mr. Don't Worry It's Early, and his boyfriend.  This is the friend who offered their second bedroom for us to crash in.  Until the FP reminded him that we would have our cats.  So then Mr. DWIE said, "Oh, probably Sassy won't like that then.  She's a cranky old bitch."  So we didn't stay with them.  LOL.

So, we ordered some wine, we had some tapas. 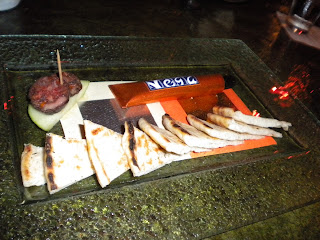 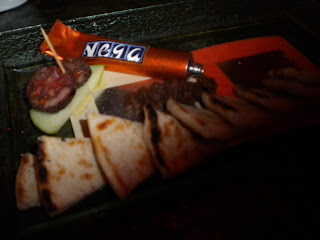 Okay, so this first thing was sent out to us.  Blood sausage pate.  In a tube that you would dispense toothpaste or bengay from.  Blood sausage.  It looks like a tube of poop!  Funnily enough, it was pretty damn tasty.  Just not a tasty presentation! 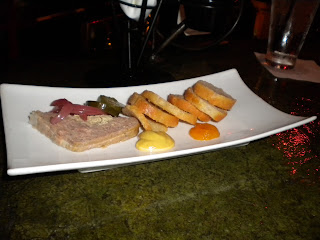 Foie gras pate.  Very nice.  I liked the pate a lot.  Something was wrong with the pickles, though.  They were a little too sour - not enough salt.  But, that's just my little old opinion. 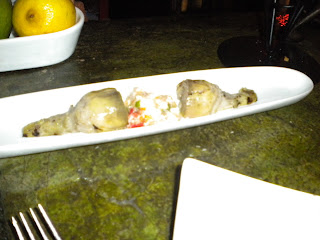 Grilled artichokes with this feta relish.  So fuckin good!  The char on the (canned) artichokes made them that much more yummy.  Yes, they were canned.  We know because we were told so by the chef.  But they were really good, nevertheless. 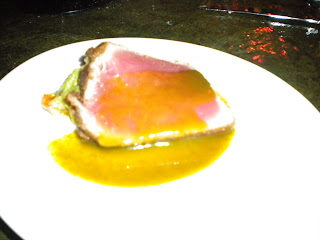 Classic dish - coriander tuna with avocado relish.  Okay, so the vinaigrette makes the dish.  This was the small portion, but I felt they could have not been so tight with the relish.  And the relish seemed to be all avocado, no tomato or green onion.  Now, don't get me wrong, I love love love avocado, but I like to have a lot of sauce and a lot of relish with things.  Some might say I drown my main ingredient with my accompaniments, but I like things with lots of ... stuff. 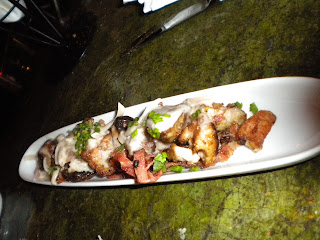 Sauteed sweetbreads with serrano, criminis, sherry beurre blanc.  Classic dish.  Pretty much the same.  The FP pointed out how they didn't really press the sweetbreads though, the way they used to.  That way, the little pieces crisp up evenly on the outside, creamy on the inside.  They were still really good though. 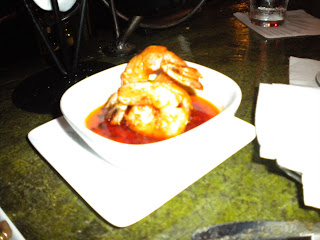 gambas al pil pil - shrimp with smoked paprika and garlic oil.  Shrimp were cooked nice enough.  I just thought it was okay.  What's the point of all that sauce though.  I don't know if we had any bread at that point - Mr. DWIE was eating all the bread.  Sure we could have asked for more.  But I always loved the original shrimp dish - sauteed shrimp with garlic, capers, basil and white wine butter sauce.  So fucking good. 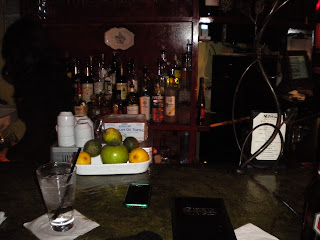 Here's a photo from my spot at the bar.  I am a little pissed, because on the roof of the facade, the owner got these amazing Gaudiesque lights installed up there.  They are amazing.  I didn't take a picture of them.  After dinner, the staff was just hanging out, and everyone was so busy getting drunk and shooting the shit that I forgot to ask him about them.   That was a long night.  A loooooooooooong night.  I was pretty tired, and the smoke in the bar that we went to after was bothering me.  I can't handle smokey bars anymore!  We left the bar about 2 hours after I was ready to go back to the hotel room.  Not that it wasn't nice seeing everyone, but I was pretty sober at that point, and everyone else was just getting sloppy stinkin drunk.  It's not fun or amusing anymore for me to be around that.  Unless it's someone who is amusing when drunk.  Most people aren't amusing to me anymore when they're fall on their face drunk.  God, I'm such a fuddy duddy!

Anyway, our meal was overall, very delicious.  I can overlook the aspercreme tube only because the stuff inside was so good.  Obviously, if you want to know the name of the restaurant, it's on the tube!
eating food nola tapas