So, I still have pictures from our cross country trip... Waffle house.  Capped, hacked, pricked.  I don't know the terms actually.  Smothered, diced and capped.  Onions, tomatoes and mushrooms.  Not as good as Waffle House can be when driving long distance.  Not awful, just, like why are the toppings on the bottom.  They're bottomings. 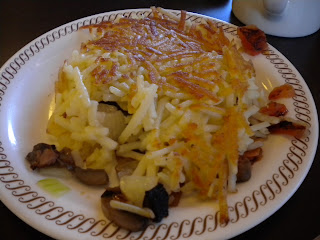 The Food Pimp got all kinds of mess on his.  At first they brought it with no chili because they didn't have the chili heated up or something, so they took it back and fixed it.  Peppered and topped is my guess.  Chili and jalapenos. 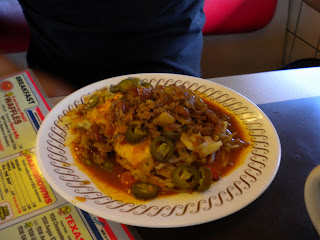 Deep fried peanuts.  I don't recall where we got these.  Alabama maybe?  Anyway, they were really salty on the shell.  Not bad, but not boiled peanuts.  I could eat a large popcorn tub of boiled peanuts!  These fried jobbers, I think we ate a third of the bag. 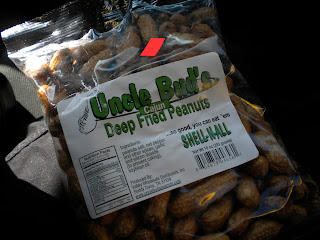 Yeah.  We had Long John Silver's on the road.  Such a bad move.  It makes me incredibly sleepy an hour after eating it.  But it was really good.  Nice and freshly fried, not hanging around for hours. 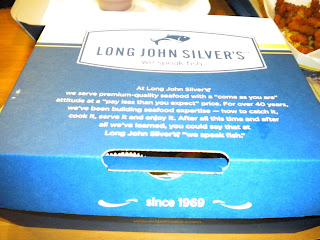 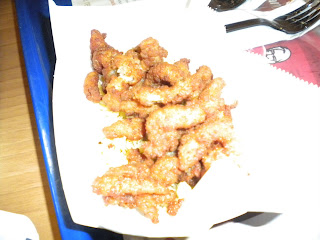 That's the coleslaw.  Funny I only took a picture of the closed containers! 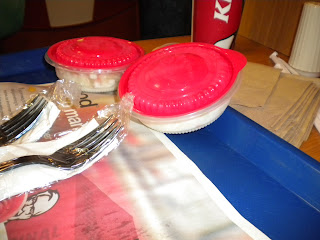 Do you know what that is?  Did you ever go on dates to restaurants in high school?  Or did you treat yourself to a restaurant meal every once in a while in college?  So then you might have had the Chili's cobb salad.  Funny, a day or two before, I mentioned how I wanted a chunky type salad, like a wedge or cobb.  And it was exactly what I wanted.  And the avocado ranch dressing tastes like something I would make.  Maybe my calling in life is to work at Chili's.  I'll see if they're hiring. 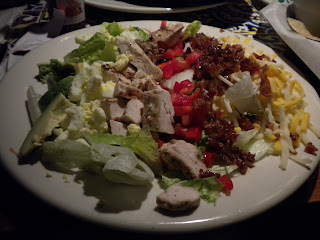 The FP's steak fajitas.  People didn't stare at it when it came out the way they used to back in the day.  People would stare that it was almost embarrassing to get the fajitas. 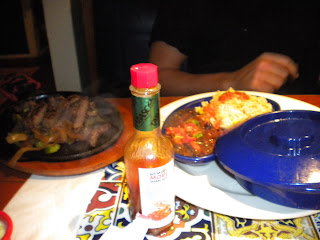 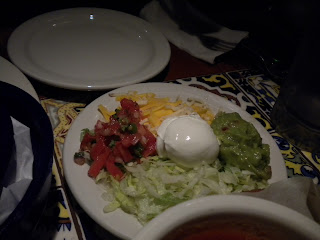 Chili's frozen margarita.  I was tired and it was muggy in Ocala, and this was refreshing!  And we were there for happy hour, so we got our 2 for the price of 1! 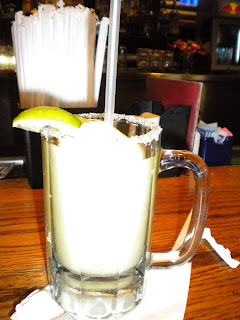 Our first night in Hallandale, we went a few miles down the street to downtown Hollywood.  Hollywood Boulevard is much smaller than the Hollywood Boulevard in LA.  But it's nice and has bars and restaurants.  So we picked the Peruvian restaurant on the quieter end of the street, of course.  It was all fairly quiet though - as it was the Sunday before Thanksgiving, probably. 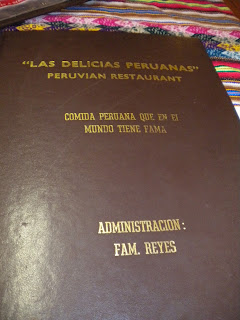 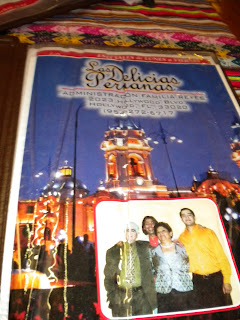 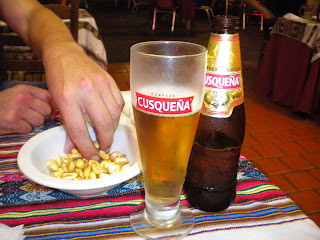 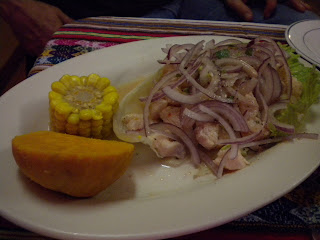 Lomo saltado.  Had to get it.  It was really good and tender.  Not crisp fried like other lomo saltado I've had, but still really tasty in it's own way. 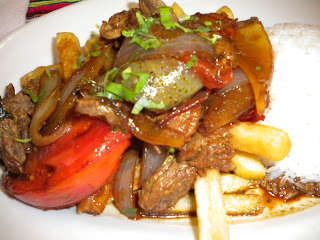 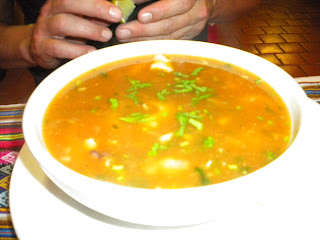 The hot chili sauce.  The FP ate a lot of it.  Of course. 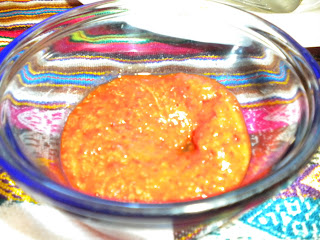 Well, that's the end of our journey food and the beginning of our new life food.  I have to write Unnecessary Supplement now... my favored child.
chili's Long John Silver's peruvian cuisine

caninecologne said…
damn, you guys had some good eatz there!

i've never had deep fried peanuts in the shell. that sounds pretty good to me. i've had them boiled which i like.

speaking of restaurant dates in high school, our "first" one was to long dong silvers, i mean, long john silver. bert had a 2 for 1 coupon. i think we had a fish sandwich or something but it was gross. then, we moved up to mcd's, carl's jr. and such. in college, our tastes became more refined ---ha ha, TGIF's, El Torito's, and Yakitori. We moved up the food chain a little bit more after we got married. oh my gosh, i can't even believe i used to like TGIF's food!

the seafood soup you guys had looks and sounds very good!

The Food Ho said…
LOL! What a romantic first date! You know, I remember TGIF being my favorite of all those chain restaurants back in the day. Chili's seemed to be cheaper than I remember. I don't know if it's because it was more expensive to me as a college student or if the prices were lowered due to the recession. I do know that it was cheaper than Quizno's can be!
December 2, 2011 at 7:15 PM