Posted by The Food Ho on December 05, 2011
Yeah, I know.  Call the BPS (Blog Protective Services).  Neglect.  Downright abuse of a blog.  Well, let's ketchup, shall we? 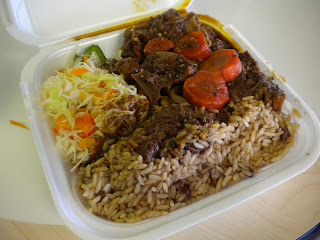 Oxtail plate.  This was the medium size.  It was like 4 pounds!  Good stuff.  Good rice and beans, good slaw and very nice oxtail. 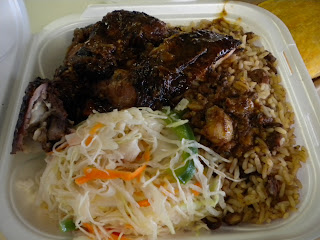 Jerk chicken.  OMG, the skin had soaked up all the jerk spices.  This was so good.  So, effing good! 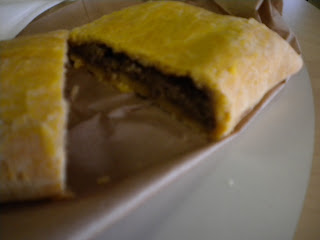 Meat pattie.  It was good as well.  Nothing wrong with it, not too much Christmas spice as some of them can have!  They also had fried chicken that looked really good.  I almost wanted to get that, but I'm glad I tried the jerk - that's one of the staples at a Jamaican restaurant, after all!

Whisky Tango
Okay, we went to this place the first week we were here because we wanted to go somewhere and use the wifi and have a beer and eat dinner.  So, I was going to get the mini corn dogs, but then something ridiculous caught my eye.  A spaghetti sandwich.  So, the description said it was the chef's childhood favorite.  So, I wanted to try it. 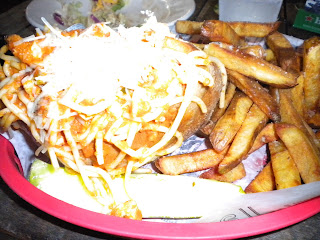 It sucked.  So, the bread was like a thick chewy boule like thing.  Which was too much.  I would have liked a softer thinner roll, but I'm sure they get soggy too fast, so this hearty bread is more practical.  Fine.  Then put more sauce.  It was like the spaghetti was lightly tossed with a little sauce.  Barely any.  And I think there was some mozzarella in it too.  And there was a chicken filet too.  Parmesan on top.  I think if there was a side of marinara to dip in, it would have been much better.  Sure, I could have asked for some, but being kinda slow, I didn't think of it until I was almost finished eating.  It would have almost remedied the main problem though. 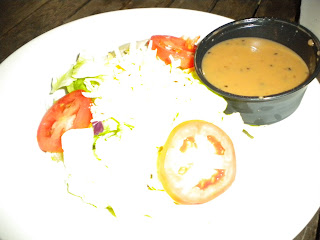 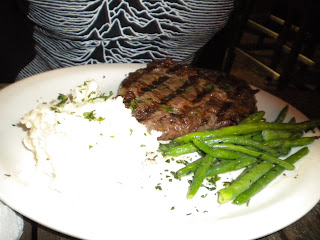 The FP got a salad and a ribeye.  The salad was a salad.  The ribeye and green beans (adolescent haricot verts)  were good.  He barely ate the cold mashed potatoes.


Georgia Pig
We were in this kinda... rednecky area doing house drivebys.  Not like shooting, looking at houses for sale, silly.  We used the iphone map to see what restaurants were around for lunch.  We found Georgia Pig.  It was really busy.  And they only took cash.  So we hopped back in the car and went to an atm and then went back.  It was a little less busy. 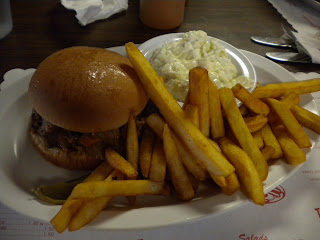 Pulled pork sandwich.  It was so so fucking tender and flavorful and really good.  The slaw was a little mayonnaisey, a little sweet, a little vinegary.  Not horrible, but not great.  I ate some for the roughage.  Fries were pretty good, but the pulled pork was so good! 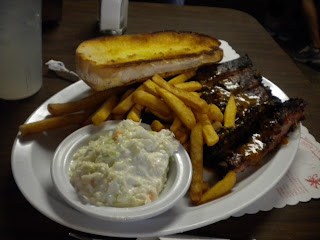 The FP's ribs.  The ribs were kinda on the undercooked side.  I mean, even if you like it where you have to gnaw it off the bone a little, you would say these were undercooked.  The BBQ sauce wasn't bad.  It was made in house, thinner, sweet with a little vinegar, just a little kick. 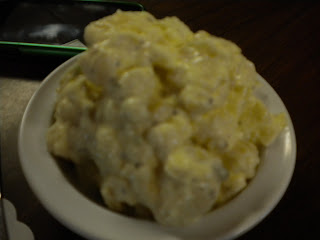 Potato salad.  Basically potatoes and the same dressing as the coleslaw.  It tasted better on the potato salad. 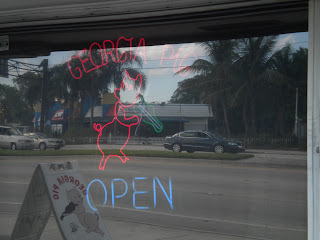 Great signs though!  And the T shirts were great too! 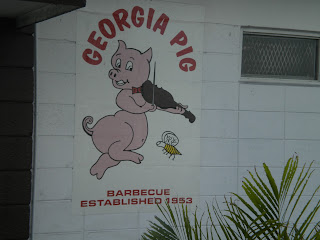 So, there's a couple places... I will catch up eventually.

Georgia Pig
1285 S State Rd 7
Davie, FL  33317
No phone number listed, but this place is so busy, they probably wouldn't answer if you tried to call!
eating food south florida