Posted by The Food Ho on December 11, 2011
Yes, I am only now posting what we ate for Thanksgiving!  So, we didn't make plans ahead of time.  We weren't going to cook at home because this apartment is a piece of shit falling apart place.  So, we were thinking we wanted to go eat some stone crab claws.  There are some places here that have all you can eat for the market price of 2lbs.  So we were contemplating some of these places.  We went to Whole Foods and used their wifi and looked up places.  No place answered, so we figured it was too early.  So, we waited until after 12 to call back.  One place - no answer.  Second place - no answer.  Third place - no answer.  That was it for the seafood places that were supposed to be good.

So, then I started calling steakhouses.  Houston's - no answer.  I waited a while and called back.  No answer.  I broke down and called Morton's - no answer.  I called Ruth's Chris.  Open - but not one reservation available.  So, I researched some more.  I found a steakhouse in Fort Lauderdale that had a special menu and they were serving the regular menu as well.  It was called Rare.  The biggest complaint from reviewers was that the steaks were undercooked.  Not a problem for us, then.  So I called.  Someone answered.  They indeed had openings - any time.  So, I booked it.

So, 2 hours later, we were seated in a very empty restaurant.  Most everyone was sitting outside.  It was so windy though, so we sat inside.  There was one other table inside.  It was a modernish type of place, with a very big bar area.  Not our normal style for steak, but, the name of the place was "Rare."  How could we go wrong with steak?

So, on looking at the menu, it was fairly simple.  It was totally Ruth's Chris influenced.  So, that was a good sign.  Although, it had kind of boring sides, just like Ruth's Chris.  I got the feeling the restaurant was trying to appeal to the young trendy crowd with an old school type steakhouse menu.  Interesting concept.  I wonder if it works on regular nights.

So, we just ordered and shared stuff, of course.  First up was beef carpaccio.  Very very thin slices.  It was very chilled though, so you had to really scrape the meat to get it off the plate in some spots.  Which, you want to get a nice, whole thin sliver of meat, if possible.  Aioli, capers, parmesan, arugula. I haven't had beef carpaccio in so long.  This was so good! 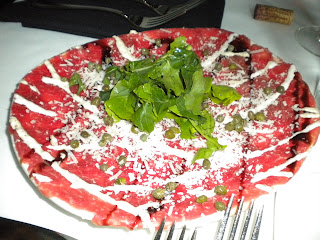 We did get to get crab claws after all!  To our surprise, they were jumbo, the largest stone crab claw I had ever had.  So, they came with lemon wedges and... mayo.  Mayonnaise.  So, you know, we tried it with both.  It was so fucking good!  No sarcasm.  Really good shit!  So luxurious.  Now, I know why all the fuss about these suckers! 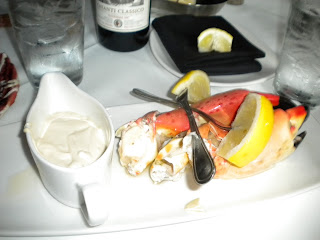 House salad.  For $5.  This was split for us, even though we didn't ask.  Romaine, ripe tomato, blue cheese and crispy bacon.  When I think house salad, I think spring mix, unripe tomato, big cucumber chunks and some boring dressing.  This was one of the best house salads I had ever had.  Really.  Well, definitely in the top 20 of "house" salads. 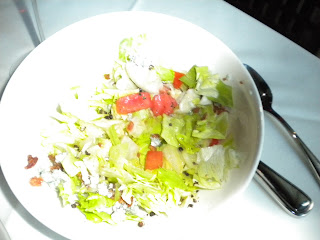 So, we were each going to get a steak, like a New York strip or something.  But when you look on the menu, you see that only the Large steaks are prime.  So, the FP in his infinite wisdom, suggested we just get a large steak and split it.  So of course, we got the bone in Rib Steak!  We ordered it medium rare, so of course it came out rare.  Which is exactly what the FP was calculating for.  So, they really char the outside crispy as hell, and then the inside was pretty rare.  It was so good.  Crispy earthy on the outside, carnal fatty melty in your mouth on the inside.  So, so good.  We finished most of it, but there was a little chunk to take home for later! 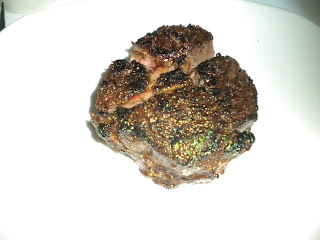 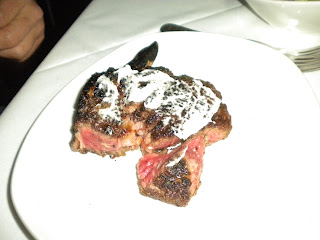 So, it was a great Thanksgiving dinner!  So, we went home and had a few drinks.  Then later on, we needed to go somewhere to watch FOOTBALL!  The FP had been scouting out this place down the street called The Upper Deck.  He said it might be a little fancy, but it was close and we knew it was open.  We pulled into the parking lot, and in the front there were mercedes and Hummers and Audis and Jags.  But then we pulled in the back and there were a lot of regular cars.  Probably just valet or VIP parking to show off like they do at hotels and casinos.

So we walked in.  Not fancy at all.  I mean, it was fine.  Big bar, a ton of TVs and beer.  So we had a Yuengling on draft.  It was horrible.  Dirty lines.  For whatever reason, the FP just drank it and got something else.  I couldn't drink mine.  I don't know why I didn't complain.  Well, the bartender did not want to seem to be there, and I didn't want to rock the boat.  I didn't really feel like having any more alcohol anyway, so it was good to sit there with a full drink, so I wouldn't be asked several times if I needed another.  I was just happy to have unhampered wifi access for 3+ hours!  And the FP was happy to be out of the awful apartment watching football.

Everyone in there just seemed to be enjoying being out on Thanksgiving.  Except the one hipster douchbag in the douchehat.  These two guys were just talking quietly at the corner of the bar, then all of a sudden douchehat yells across the bar to the bartender, "Can I get a drink?  I need a drink!!!!"  Really disturbing.  At least it looked like his friend was embarrassed.  But he got his drink, and then they resumed their quiet conversation.  It was weird, like he had Turrets or something.

So, of course, after a while, we were both thinking of having a little som'n som'n - even though we had had a large meal, but that was several hours before.  So, of course, the FP had wings.  They sure looked like they needed more sauce, but he was just happy to have wings.  He was thankful for his buffalo wings and blue cheese sauce. 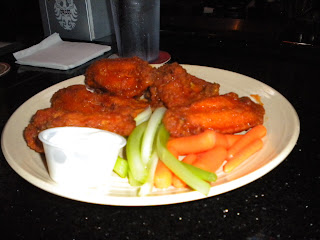 A little while later, I developed a sweet tooth.  So I got a key lime pie.  Which was presented more like a cheesecake.  Part of pie that I love about pie is the crust.  In this presentation, the crust is minimal.  It was really tart and key limey.  A little too tart, but with the whipped cream it tasted good.  Of course, I ran out of whipped cream, but I didn't ask for more. 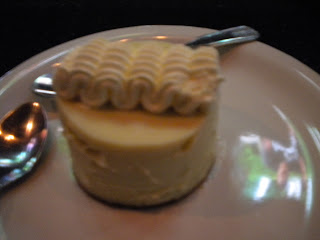 Later on, the bartender admitted how she didn't want to be there, but she had traded working Thanksgiving to be with her son on Christmas instead.  Understandable.  I gave her a good enough tip.  But I wondered if she was using the son excuse to get better tips.  I shouldn't think that way, but I do.