Posted by The Food Ho on February 06, 2012
Descriptive title, eh?  Well, let's get started then.  No need to dilly dally or shilly shally.  That's what the Unnecessary Supplement blog is really about.

Holy Fuckin Cannoli.  What's this?  BBQ shrimp.  As in Nawlins BBQ shrimp.  If you're not familiar, it's not like barbequed shrimp.  It's this shrimp dish that you cook in with spices, worcestershire, garlic, and lots and lots of butter.  The FP made it with lots and lots of butter.  It's so fucking good, the shrimp are delicious, but, one has the urge to just take a whole loaf or bread, or baguette, or whatever, and just submerge it in the sauce and eat the whole thing. 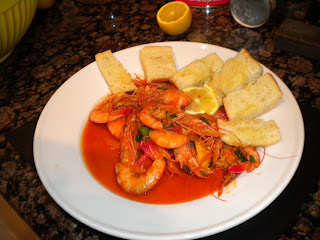 So, the next day, the FP used the leftovers and made a shrimp and sausage tomato sauce.  He really let the sauce stew. 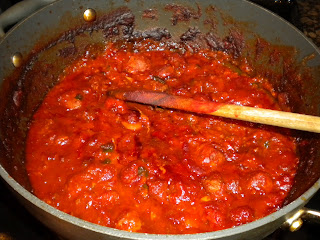 Then he served it over pasta.  Yum yum! 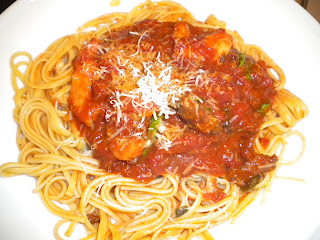 This was an unusual dinner for us. 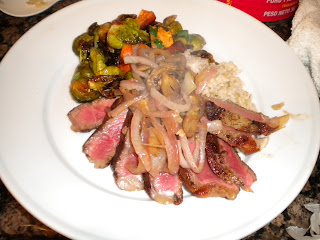 New York Strip - that's not unusual.  And sauteed onions and mushrooms pan sauce.  That's not unusual either.  I love having mushrooms and onions with steak!  But the sides were.  The FP is working for this family that likes healthy food, so he had some brown rice.  So that's what we ate.  I discovered brown rice a while ago, having worked in a restaurant where serving healthy crap was kind of important.  But for the FP, brown rice is a new revelation.  It's not like we are turning in our white rice frequent buyer card or anything, but it's nice to eat different rices for different meals.  And then the other vegetable was garlic and ginger roasted brussel sprouts and sweet potatoes.  I gotta say, it was refreshing and delicious to have a little change from the usual. 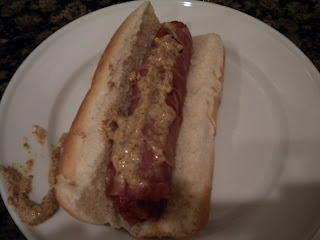 Horribly cheap pizza from the place down the street. 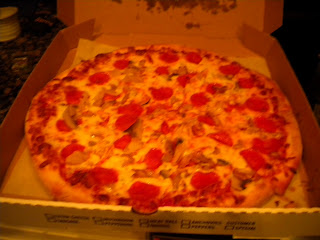 I read reviews saying it used to be great NY style pizza before, but recently the place changed ownership and the quality suffered.  The large pizza with two toppings was $13.50 or so.  Cheap.  Cheap taste.  There was a ton of mozzarella and barely any sauce.  And you know I would rather have it the other way.  And then the mushrooms.  The mushrooms.  They were canned.  And it seemed like they were tossed on the pizza at the very end.  So, they just tasted like canned mushrooms. 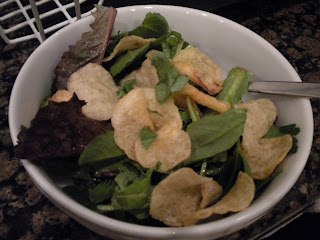 We had lettuce and vinegars and olive oil.  Just no "stuff" to put in it.  We've been putting croutons in our salad practically every time we have it.  But on this day, there were none.  But, I had some potato chips that I had bought to eat with one of my guilty pleasures - store bought onion dip.  I wanted some crunch, so I garnished with potato chips.  Which kind of just made me want a potato chip salad!  But I didn't have one.  I probably didn't have bread for it.

Another thrown together lunch. 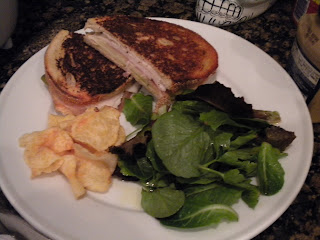 Grilled turkey, swiss and proscuitto sandwich with pickles and mustard, "grilled" in the pan with olive oil.  Potato chips again, and just lettuce with oil and vinegar.  Simple simple simple.
I hope everyone is having a good new year of the dragon!
bbq shrimp cooking at home eating hotdogs pizza proscuitto sausage shrimps