Posted by The Food Ho on October 11, 2012
I have so much backlog of stuff to post.  But instead, I will post about what I'm cooking today.

I keep seeing delicious things on pinterest involving slow cookers.  So, I finally broke down and bought one.

I was supposed to stew oxtail, for the crock pot's virgin voyage.  But, I went to Bravo and found the oxtail, and I couldn't bring myself to buy any.  I thought about it.  It was $3.99/lb, which is a good price.  But most of it looked old and dried out.  And it wasn't nice round cuts, it was like they took the big pieces and cut those in half.  And then there was the water.  The drip pan and hose were right above the oxtail compartment, and a steady stream of water was bouncing off turkey wings into the oxtail compartment.

I have bought and eaten some sketchy stuff.  But that was too much.  So, I looked in the prewrapped meats section, and I found some nice looking pork butt.

So, pork butt it was.  Even though that is not what I wanted.  It was either that or chicken.  And chicken seemed too boring.

I've never used a slow cooker before.  I don't believe my mom ever used one.  I had no idea how long it would take to cook a pork butt. 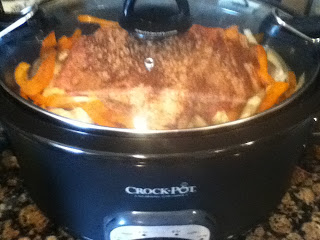 Now, I know how to roast pork in an oven, or how to braise it.  But this slow cooker thing is new to me.  I guess, if I had known, I would have gone to the store earlier, and I would have seared the pork first.  Oh, well.  Cook and learn.  My only dilemma is, do I just put it on low and let it go all night?

That's what I was thinking....

caninecologne said…
let it go 8 hours at least. it should be falling apart after that. did you put it on low?