The End Of The Affair

Posted by The Food Ho on January 05, 2020
I've always loved pork.  It's in my blood.  There was the Mount Pinatubo eruption in 1991.  I remember the photo of the Filipinos carrying away a pig.  So Philippine.  I mean, if my home was threatened by a volcano & I had a pig ready to roast, you better believe I would take it with me as I evacuated!

Roast pork with the crispy skin has always been my favorite.  Although, a good pork adobo, sisig, or Chinese steamed spare rib with black bean sauce are really delish too.

And then there's BACON.

When bacon in desserts first became I thing, I loved to make bacon chocolate chip cookies.  I loved those chocolate covered bacon slices sprinkled with sea salt that you could get at the county fair.  Those were good.  And so was some good ole crispy (on the overcooked side) bacon.  But I saw way too many cakes and cupcakes covered in anemic, soft, greasy bacon chips.  I mean, C'mon!  Cook it!

But alas, we all took it to far with the pork belly.  It used to be this cheap hunk of undesirable pork, but then it became trendy.  And it's still on sooooo soooo soooooooo many menus.  Of course, the foodservice suppliers have come up with precooked pork belly, so all you supposedly have to do is reheat it.  Gross.

When we opened our restaurant, we always had a pork dish on the menu.  And we bought the more expensive pork - not the commodity shit.  But, every once in a while, the pork would come in BAD.  But, you don't really know for sure, until you open it.  And then YOU KNEW. But our salesman always wanted us to save it to trade for a "fresh" hunk of pork shoulder.  Yeah, right.  We didn't have the most storage - and who wants rancid pork commingling with other stuff in the fridge or freezer?  If we did have room, we would have to use yards of plastic wrap, plastic bags and garbage bags to wrap that shit up.

So each time I saw the anemic bacon, the under crisped pork belly, the rancid pork shoulder, I fell out of love a little more.  One year, for the restaurant anniversary, we roasted a pig in a Caja China.  We started before dawn.  It was an amazing experience, and it tasted great.  That day, there was an old spark.  But it died down with the next order of bad pork.

So, over the years, my faith in pork has wavered.

Over the holidays, we ate a lot of heavy, meat and starch heavy food.  It was the holidays.  And we were in cold climates for Thanksgiving and Christmas.  We cooked prime rib for New Year's Eve.  And we both had joint problems, and skin problems.  So, like so many others, we went meatless on January 2nd.  TFP cooked a vegetarian dinner with just veggies and brown rice.  And I ate so much of it to purge my body of all the stuff I had been eating.  And the next day, I didn't feel as tired or sluggish.  And my joint aches are slowly receding.  And it's only been three days.

We went vegetarian several months ago (TFP went vegan, I stayed vegetarian).  After a couple weeks, we both remarked how all our aches and pains were so much better!  I thought I had the beginning of arthritis!  But I went for a work up and knee X-rays, and no arthritis markers were found at all!  I wish I had been able to get all these tests done before and after my dietary change...

We gradually started eating seafood, and then meat.  When we eat meat and seafood, we do try to eat more vegetables and stuff.  And it helps.  But not as much as eating just a huge plate of vegetables.

The other night, we watched the documentary "What The Health".  I guess in trend and research time, it's old news.  It's a pro plant based film, so maybe it uses propaganda and conspiracy theory to prove its points.  But if one wants to win people over to their point of view, they usually have to exaggerate, and use props, don't they?  I mean, we've all watched The Hunger Games, right?  Oh, maybe that's a bad example....

But I gotta say, the part about how the bacteria in meat cause inflammation really left an impression on me.  Because video of pigs being processed, and abscesses being popped as the pig moves down the assembly line was disgusting.  I don't really get a weak stomach from gross stuff.  I think I grew up seeing gross stuff.  But not big pig abscesses being cut open and pus oozing out.  I guess that's where I draw the line?

So, I'm breaking up with the other white meat.  For the immediate time being, I'm declaring abstinence from all meat, seafood too.  I  will inevitably eat some dairy, because - DESSERTS (king cake especially) -  my biggest vice (besides TV or "sloth" ((the vice, not the animal, although I love sloths)) ).  I'm not gonna cut everything out of my diet at once!  I want to be realistic...   Will I have rebound meat?  Absolutely.

But for now, a toast to better days: 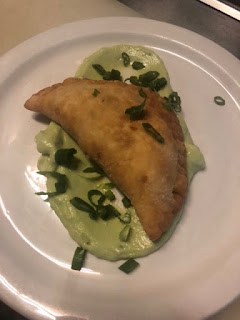 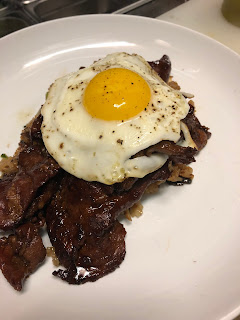 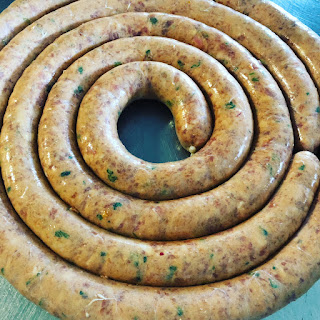 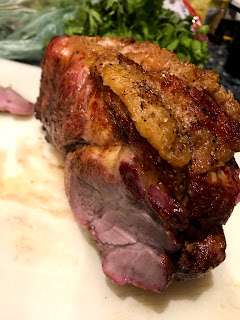